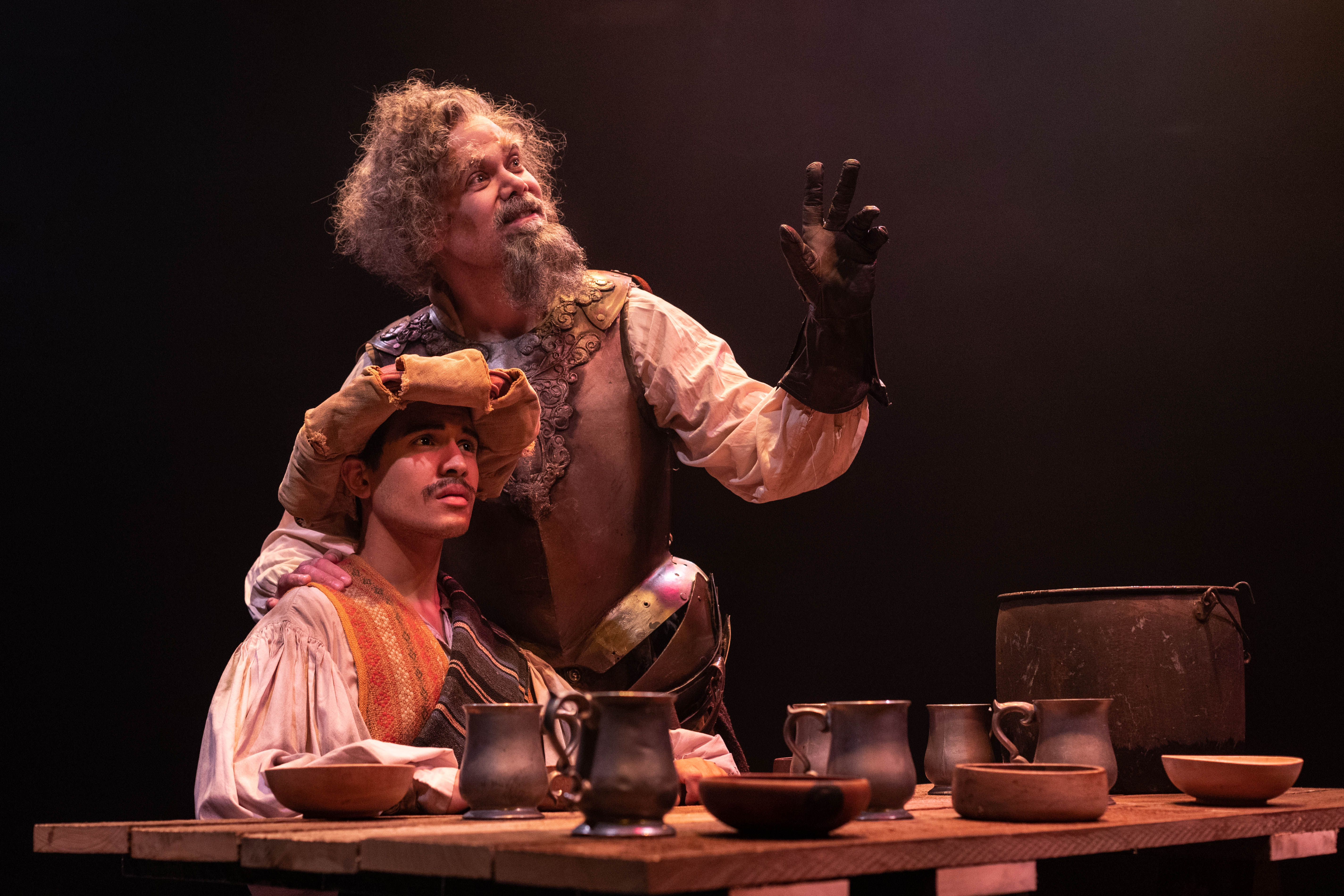 I have the softest of spots in my heart for Man of La Mancha, having stage- managed a production that will always remain as one of my most cherished memories. As a result, I have the highest of expectations for any production that dares to compete with or compare itself to “my” production. Consequently, I ventured to Opening Night of Mac-Haydn’s offering with a combination of skepticism and anticipation. Following the extended, rousing and well-deserved curtain call ovations, I hereby humbly and whole-heartedly confess that this production not only exceeded my impossibly high expectations, but quite possibly has set a new standard for productions to follow. I have no doubt Richard Kiley and Joan Diener, stars of the original 1965 Broadway production, would offer their kudos as well. This show is Mac-Haydn at its finest.

Director Todd Underwood has created a production positively seething with virtually every human emotion, from the basest — lust and cruelty and violence– to the ethereal– chaste love from afar, purity, innocence, and perhaps the most simple but invaluable of all—kindness. The stage is literally set for this play-within-a-play from the moment the audience enters the house. The creak and clank of cell doors, squealing rodents, rattling chains, the groans and coughs of unseen prisoners, overlaid with sharp and haunting notes of lute and mandolin greet those taking their seats, not-so-subtly setting the scene for the story about to unfold .Andrew Gmoser scores twice, with his stunning scenic design and always-illuminating lighting. Dungeon cells cast terrifying and shadows across the extended stage; harsh, blood-red lighting punctuates the show’s harshest moments, while bathing others in the white light of purity and love.

Anyone unfamiliar with the story of Don Quixote, The Lord of La Mancha, Knight Errrant, Knight of the Woeful Countenance, tilting at (unseen in multiple ways) windmills, pursuing The Quest and the favour of My Lady with equal passion and zeal….I recommend you read the original work by Miguel Cervantes. For this production, simply give in to the beauty of the performances and the passion of the piece.

Veteran of many a fine season at the Mac, Gabe Belyeu has gifted theatre-goers with many a signature performance, but with this production, he has eclipsed each and every one of his previous appearances. He is an absolute triumph in the title role; his Don Quixote is quite possibly his finest hour upon the Mac’s stage. His is a layered, perfect “triple play” presentation of characters—the gentleman prisoner Miguel Cervantes, the Knight Errant Don Quixote de La Mancha, and his alter-ego/’real time” Alonso Quijano. Belyeu imbues each with his own personality and presence, transitioning effortlessly from one to the other as the action demands. It is as it should be that his Don Quixote dominates the stage and the show; from the moment he declares himself “I, Don Quixote” as the “trial” of Miguel Cervantes begins, Belyeu owns his character with every fiber of his being, All his scenes with Maya Cuevas, the less-than-Fair Lady Aldonza, are especially powerful, each performer matching, challenging and complementing the other with their delivery and their presence.

As the action builds toward the signature “Impossible Dream”, you could sense the audience waiting for That Moment which is the classic hallmark of this show, And Belyeu did not disappoint. His character’s complete and utter belief in and dedication to The Quest throbs and soars through every single note. As often happens with the very best of moments on stage, the few seconds of silence that followed as the final notes died away were as telling a response as the deafening applause that followed. And if anyone should ask, yes, I cried during the finale, as Belyeu’s quavering voice, trembling body Alonso Quijano struggles to rise from his deathbed to become once more the Dauntless Knight Don Quixote de La Mancha. With Cuevas’s glorious voice reprising the Impossible Dream, Belyeu literally rises up one last time to fight the unbeatable foe and right the un-rightable wrong, in a heart-wrenching but triumphant moment.

Maya Cuevas continues to be a break-out star at the Mac, and here is more than well-equipped with the vocal capacity to carry her character to the depths of despair and the heights of dawning self-worth. She does so with glorious, impassioned, rich delivery of every song, but perhaps no more so than in “Aldonza” as she spews forth the pain, terror, despair, hopelessness, and utter depravity that have characterized her life after being born on a dung heap, fathered by a faceless, nameless soldier, from which side of a regiment even her mother did not know. Her facial expressions are flawless, mirroring every emotion she delivers in song. As she ponders “What does he want of me”, as she struggles to understand Don Quixote’s enchantment with her, is just another among the many moving and perfect moments of her performance.

Fresh from their pairing so very well-played in She Loves Me, Belyeu and Velez make another perfect “couple” here. Anthony Velez offers up another debut season star turn as Don Quixote’s trusty and trusting squire Sancho Panza , and is an absolute treat to watch. Despite a rather unfortunate costuming choice which provided him with headgear that resembled nothing so much as a large Tarte Tatin/Baby Dutch pancake, Velez turns in a committed, dedicated and at times almost giddy performance as a more youthful than typically- cast Sancho. His rendition of “I really like him” is clearly testimony to both his character’s opinion as well as his personal enjoyment of appearing in this classic show. He delivers his lines with the straight-forward simplicity they require, and he matches Belyeu step for step, and word for word, along every part of the journey they are on together.

There also is no shortage of talent on display from the supporting cast and ensemble players. This is clearly a cast who have come together believing in the absolute possibility of achieving The Impossible Dream, and it shines through in virtually every moment. From Kylan Ross as The Padre, whose “To Each His Dulcinea” makes us believe in the guarantee that every man can find love, pure and chaste from afar, to Ashley DeLane Burger’s beleagured Innkeeper called upon to drub….er, dub…the newly-christened Knight of the Woeful Countenance amidst the grandeur of her castle…er…inn, each member makes the most of their particular moment in the spotlight.

The Muleteers’ brutal treatment and abduction of the Aldonza made me cringe, while Chris Frazer as The Barber whose shaving basin is mistakenly appropriated as the golden Helmet of Mambrino made me laugh out loud, fortunately along with the majority of the house in attendance. Andrew Burton Kelley compels attention…and disdain…as both The Duke and Dr. Corrasco, while Kelly Gabrielle Murphy as Antonia, and Rachel Pantazis as The Housekeeper bring pseudo piety, Christian charity and a highly unlikely concern for virtue to their roles.

Costuming by Kurt Alger is suitably fitting for the piece, with dungeon prisoners shuffling and clawing about in tattered remnants of their former finery, and muleteers in clothing as rough and filthy as their character and their behavior. A fine selection of headgear…aside from Sancho’s, perhaps…gives the other actors in the embedded play the inspiration and motivation for the characters.

With apologies to Joe Darion, and to paraphrase Sancho, to say I liked it, I really liked it does faint justice to the quality and caliber of this production. This surely will be the Mac’s finest effort of the season, and should rightfully take its place among the Top Five Shows in the Mac-Haydn’s Theatre’s long history of memorable and mesmerizing productions. Before tickets become nothing more than an impossible dream, reach out to the box office, and see this transformative, transfixing production of Man of La Mancha at the Mac.

Running time is 2 hours and 15 minutes, with a 15 minute intermission. http://www.machaydntheatre.org/

COVID precautions are in place for cast and audience. Proof of full vaccination required, with full masking required by audience members on the grounds and in the house.