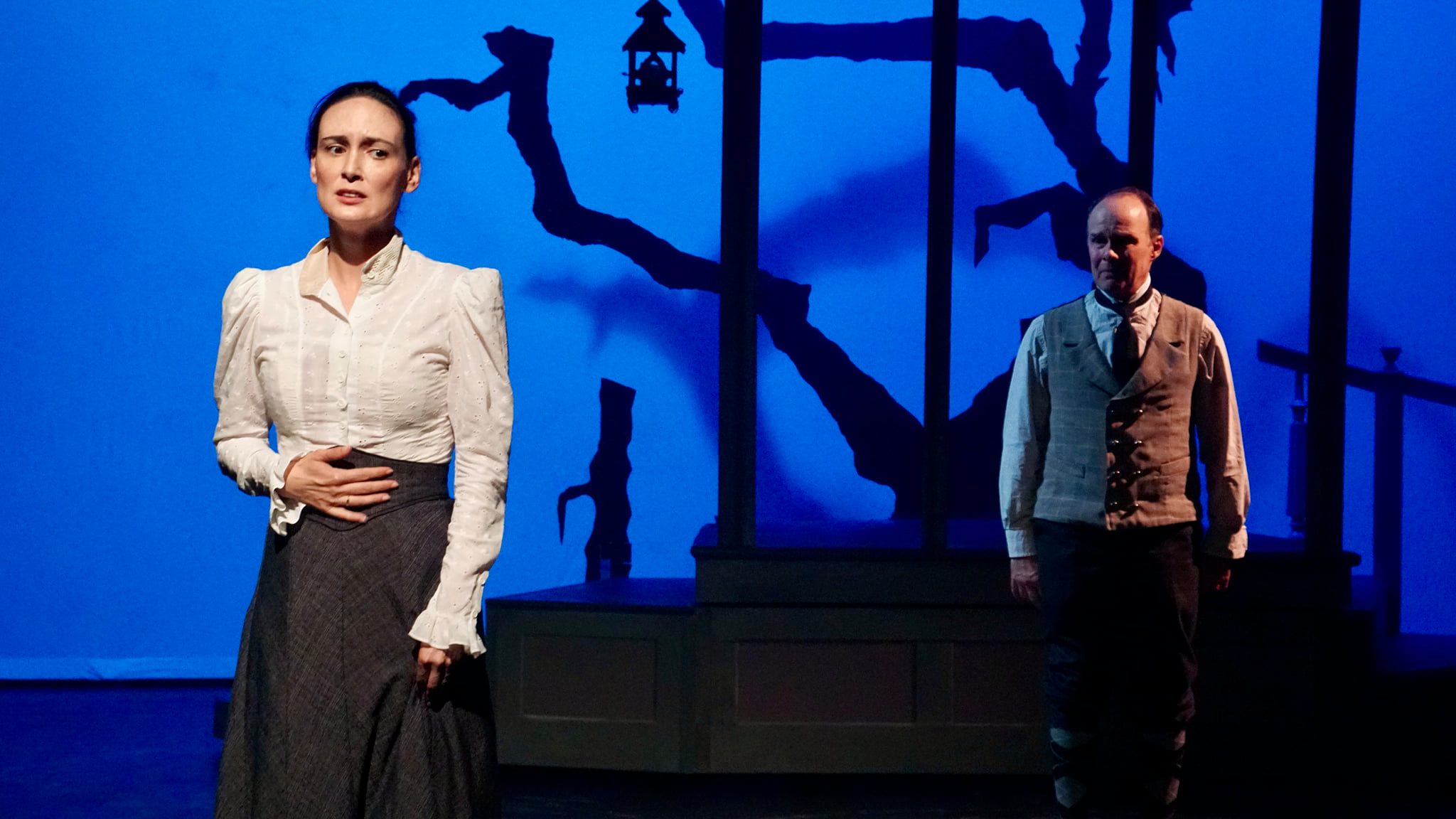 Henry James’s 1898 horror novella, The Turn of the Screw, was first published in a 12-part serial format in Collier’s Weekly. James, a foremost novelist in the English language, found his popularity waning, and although he later said he despised the serial format, he needed income. His serial quickly became popular, and by October of that year, the work was published in book form (retitled The Two Magics) in the United States and England.

Since its publication, The Turn of the Screw has been adapted in myriad ways, including several films, a Broadway play, and an opera. Generations of critics and scholars have analyzed and debated the meaning and structure of what was initially considered a fairly simple ghost story, and by the 1930s, the work was recognized by many to be psychologically sophisticated in its ambiguity.

The Oldcastle Theatre Company in Bennington, Vermont, is currently presenting Jeffrey Hatcher’s 1996 adaptation. With two exceptionally fine actors (Rebecca Mozo and Oliver Wadsworth), a masterly director (Jillian Armenante), and top-drawer technical design, this production has most of the ingredients for a transcendent night at the theater. How I wish Hatcher’s adaptation completed the recipe.

In James’s story, a governess is hired to care for two orphaned children in an English manor house. The governess soon learns of the mysterious deaths of her predecessor and the groundskeeper. Prior to their deaths, the two had been discharged for having “illicit” relations. The governess believes she sees their specters. Convinced that the children are in danger of being defiled by the evil ghosts, believing that she’s observed the spectral beings talking to the children, the governess’s unshakable mission to protect the children possibly kills one child and traumatizes the other.

Herein lies the genius of James’s story. We are left to decide whether the governess’s account is real, or if she is mad, delusional. And here is where I feel that Hatcher’s play doesn’t work: the play is written for two actors, a woman who plays the governess, and a man who plays everybody else. There have been many who find this adaptation admirable because the bare-bones quality of the presentation increases the intensity. For me, it has the opposite effect. That the governess is engaging with a dozen or so characters played by one man tilts us toward the conclusion that she must be hallucinating.

But I can hardly imagine seeing a finer production of this flawed play. As the governess, Rebecca Mozo is a perfectly buttoned-up Victorian woman, naive and repressed, whose unravelling is initially subtle until she gradually but inevitably reaches a point of no return. Her lovely, but appropriately muted, overskirt and bodice (courtesy of costume designer Ken Mooney) slowly reveal a peek of red ribbon at her throat, and by the show’s end, the red ribbon hangs in disarray. (Very clever touch.)

Oliver Wadsworth, playing everyone else, is a marvel, expertly delineating the children’s uncle, a female housekeeper, a 10-year-old boy. He also spins the beautifully constructed, deceivingly spare set (also designed by Mooney) as the play’s scenes change, guiding us inside and out in seamless transitions. Some of Wadsworth’s characterizations are very funny; while that’s enjoyable in the moment, it distracts us from the play’s trajectory. I don’t see this as Wadsworth’s fault. I think, again, that the problem lies in the script. It’s quite a demand to make of an actor, to differentiate so many roles with clear transitions from man to woman to child. Wadsworth’s work is exceptionally good, especially considering all the demands the script makes of him.

Jillian Armenante’s deft direction enhances the pace of the play and complements the estimable strengths of her actors. Cory Wheat’s sound design is spectacular, informing the experience with music and sound effects, as does David V. Groupé’s eerie lighting design.

For all of my complaints about the script, I’d still urge you to see The Turn of the Screw at Oldcastle, because the artistry of the company is that good.

THE TURN OF THE SCREW is directed by Jillian Armenante with costume and scenic design  by Ken Mooney, lighting design by David V. Groupé, and sound design by Cory Wheat. The production stage manager is Kristine Schlachter.

The production runs September 3-12 at Bennington Performing Arts Center—The Home of  Oldcastle Theatre Company, 331 Main Street in Bennington, VT. For the safety of everyone, the company requires that audience members wear masks inside the theater.

Performances are Wednesday–Saturday at 7:30 pm; and Saturday and Sunday at 2 pm.  Wednesday, September 8, is Pay What You Will Night, all other performances are $25 per ticket.  Tickets can be purchased online at oldcastletheatre.org/tickets, by phone at 802-447-0564, or in person 90 minutes prior to each performance.