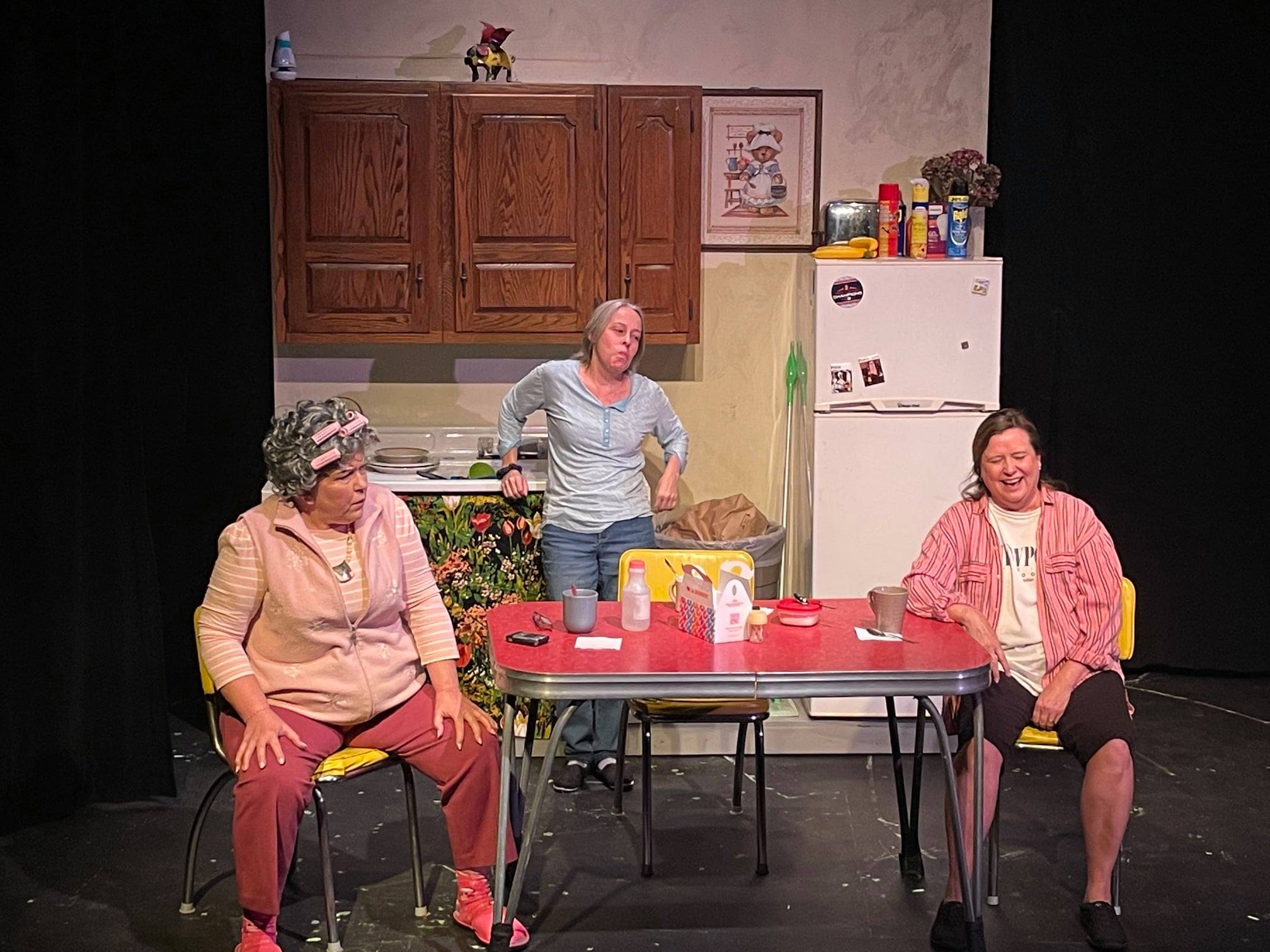 GOOD PEOPLE is the final production of the 2021 season at The Theater Barn. Founded in 1984 by Joan and Abe Phelps, this summer’s season is being produced by their son, Allen Phelps, the new Producing Artistic Director.

This drama is an excellent choice for the company, which has assembled a strong cast to perform this finely-crafted play. Lindsay-Abaire won the Pulitzer Prize for his play, RABBIT HOLE, and GOOD PEOPLE was a 2011 nominee for the Tony Award for Best Play. Set in the working class, Irish community of South Boston, this play offers moments of high drama and very human comedy. Lindsay-Abaire creates characters who are complex, often surprising, and authentic as he examines the hopes and fears of people living on the edge, with the most limited of means to stay afloat.

The story is set in the present day and unfolds in multiple locations that reflect the haves and have nots of the “Southies” of South Boston. We are introduced to Margaret (Margie) as she is being informed by her manager at the Dollar Store (Stevie) that he has to fire her because she has been late to work too many times. Set in the gritty ally behind the store, Margie desperately explains how the sitter for her daughter, Joyce, was late. But Stevie has no choice because his own job is on the line.

In subsequent scenes we meet the people of Margie’s small world: her landlady and unreliable baby sitter, Dottie, her old friend from the neighborhood, Jean. We also learn that Joyce is a disabled adult who must have constant care—so Margie losing her job is a serious threat to them both. The women discuss Margie’s options, but no one is really hiring. Jean offers a solution. She has recently run into their mutual friend from high school, Mickey Dillon. Unlike Margie and Joan, Mickey escaped his humble beginnings and is now, 30 years later, a wealthy doctor living in an upscale Boston neighborhood. Jean says Mickey (now known as Mike) might help her find a job. The scene shifts to Mike’s office where Margie is able to get past reception and corner him. He tries to be congenial but is clearly uncomfortable as Margie brings back old memories and they vie for who had it worst. Margie hits a nerve when she describes Mike as “lace curtain Irish,” a derogatory term for Irish who had rejected their poor backgrounds as they moved up in society.

The contrast between their pasts and presents becomes more evident in the next two scenes. The women play bingo at the church hall and Joan encourages Margie to tell Mike that Joyce is his daughter. It is unclear if this is a fact or just a possibility. Margie and Mike did have an affair, but she ended the relationship and soon took up with another man (who abandoned her after the baby was born.) Author Lindsay-Abaire keeps us guessing as to who the actual father is. The second scene is set in the beautifully appointed home of Mike and his wife, Kate. Once again Margie arrives unannounced. She is welcomed by Kate, an elegant and articulate African-American woman and professor. Mike is not pleased to see her, but Kate welcomes the chance to get to know about her husband’s early life.

Lindsay-Abaire is a master at writing dialogue and arguments that carefully reveal his characters to lay bare their true natures. His use of overlapping dialogue adds vitality and a sense of authenticity to his realistic drama. The Theater Barn cast excels at handling the intricate altercations and impassioned exchanges. Director Phil Rice has adeptly staged the play and has elicited strong individual performances from the whole cast, as well as powerful ensemble playing. Especially impressive were the flawless South Boston accents and the rapid pace and brisk patter—giving full range to both dramatic and comedic moments.

Kathleen Carey shines as Margie, making us really care for the beleaguered women who has done the best she could. While her performance is not always nuanced, she never fails to show the strength and grit of Margie. As Mike, Christopher Brophy carefully walks the line between the urbane physician and the street kid who escaped his poor background, giving us a character with whom we can empathize as well as like and dislike. Kim Wafer turns in a subtle and affecting performance as Kate, although she could use considerably more volume; she is hard to hear. Supporting players Lisa Frankin (Dottie), Angela Potrikas (Kean), and Joseph Sicotte (Stevie) also turned in fine performances.

GOOD PEOPLE was somewhat challenging on the technical side. With six scenes and five different locations ranging from a gritty alley to a lavish living room, set designer Sam Slack created visually effective settings. However, the long scene changes tended to dampen the effect of the forceful drama. Nevertheless, GOOD PEOPLE is good theatre. It was an intriguing and satisfying evening of a fascinating play that was clearly appreciated by the opening night audience.