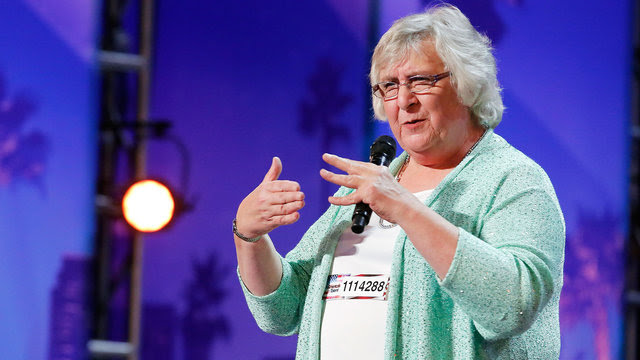 West Stockbridge, MA –  The Italian word corposo refers to a rich, full-bodied wine. Rich and full-bodied is also an appropriate descriptor for the life of comedian Julia Scotti.

Since 1980, Julia has been honing her craft in clubs and theaters throughout the United States and Canada, performing for the first 20 years as Rick Scotti, and now, after a life-changing hiatus, returning as Julia Scotti. Her second act has been the very definition of Corposo.

The new and improved Julia has been described by colleagues and press as, among other things, “a force of nature”, and “a comedy chainsaw flying through the room”.

As Julia says, her comedy always has to be “fearless and honest”, and America can feel both in her performances. Since coming back to comedy in 2011, she has been named one of the Top Five Transgender Comedians in the Country by Advocate Magazine, and has performed at LGBTQ events across the country, and was one of the winners of the Laughlin Laugh Festival in Nevada. But she wasn’t done yet.

Simon Cowell said that “you genuinely made me laugh” as she introduced herself to a national audience on Season 11 of America’s Got Talent.

Not content to sit on her laurels, Julia went on to record her first, best-selling comedy CD entitled, “Hello Boys I’m Back!” and is gearing up to record her second one. This year, she is being featured on the Showtime Television Network Special, “More Funny Women of a Certain Age.”

Tickets can be purchased at thefoundryws.com

(This event is indoors, all patrons will be required to provide proof of vaccination at-the-door, and wear a mask while not actively drinking.)