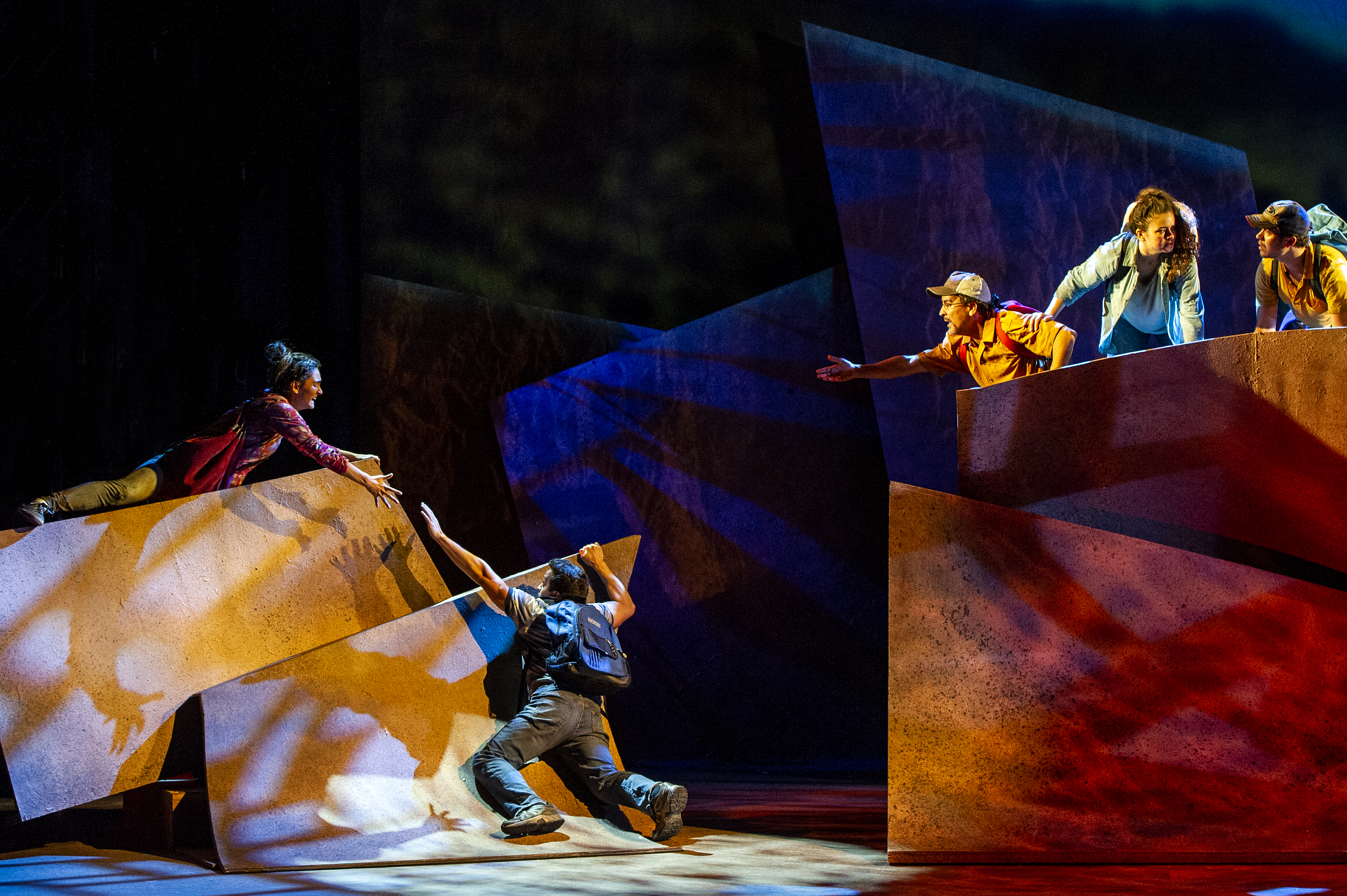 There is a dynamic production of a world premiere dance musical, A Crossing, at Barrington Stage Company in Pittsfield.  It is stunning for the eyes which outweighs some of the problems.  The show, which is sung through, was created through BSC’s Sydelle Blatt New Works Commissioning Program in association with Calpulli Mexican Dance Company.  Original songs are written by Zoe Sarnak with traditional Mexican folk songs arranged by George Saenz.

The script has been written by the usually dependable Mark St. Germain.  The basic plot is in today’s news.  A group of Mexicans journey north to the American border confronting danger after danger, deprivation after deprivation, violence after violence.  Giselle (Ashley Perez Flanagan) leaves her village with her grandfather Arturo (Carlos L. Encinas) to avoid the savage cartels.  The pregnant Karina (Aline Mayagoitia) is running from a violent relationship.  Martin (Justin Gregory Lopez) is searching for his son.  The leader of the group is the slimy Coyote (Omar Nieves).  Sol (Andres Quintero) and Luna (Monica Tulia Ramirez) are the audience’s and travelers’ guides as they comment on the action like a Greek chorus.

Some of the migrants create relationships as they struggle on, but few, if any, are involved in fully developed plot lines.  As in newspaper articles and televised views, however, we do not know the depth and subtleties of the travelers’ back stories.  In addition, we see only the darkness and distress of the trip unalleviated by any joy or peace.

BSC Associate Artist Joshua Bergasse directed and collaborated on the choreography with Alberto Lopez.  There is one enthralling stage picture after another… one exuberant dance after another, though they are occasionally repetitious in their presentation.  The acting is uniformly effective and the voices in solos and duets are superb. Many of the choral numbers, however, are difficult to understand as the accompaniment by the five-piece band is heavily miked as is the cast.  The high volume often makes the lyrics indistinguishable.  The music is repetitive in that most of the numbers have the same tempo and timbre.

It is Bergasses’ staging and especially the technical designs that give the show its strength.  The set by Beowulf Boritt is rich in its intimacy and expansiveness.  The audience is greeted by a contemporary Statue of Liberty made of pipes and crates which are disassembled and become props. Huge diversely geometric shapes serve multiple purposes;  in particular, the migrants have to struggle over a mountain formed by these set pieces in an emotionally stirring scene.  Part of the backdrop are rotating images of the Aztec calendar in front of a scrim that changes to represent the time of the day as well as setting the tone of each scene.

The spectacular lighting by Jason Lyons enhances the magnificence of the set.  He uses every part of the on- and offstage areas to illuminate the stage that is often bathed in subtle shadows.

Alejo Vietti’s costumes are fittingly pedestrian for the travelers but also flexible enough to support the actors in the exuberant dance numbers.  The costumes of the spirit guides reflect the design of the Aztec calendar.  Caleb Marshall-Villarreal as Quetzalcoatl performs a rousing dance wearing Vietti’s brilliant costume with bells that accentuate his moves as drums beat out a provocative intensity.

The show is captivating, but it needs some doctoring to realize its potential, which is significant.

A CROSSING runs from September 23—October 16, Wednesdays through Saturdays at 7:30 pm; Saturdays and Sundays at 3:00 pm at Barrington Stage Company’s Boyd-Quinson Stage, 30 Union Street, Pittsfield, MA.  For tickets call 413-236-8888 or online at Barringtonstageco.org

All patrons are required to present proof of vaccination or a recent negative COVID test, ID, and remain masked throughout the performance.