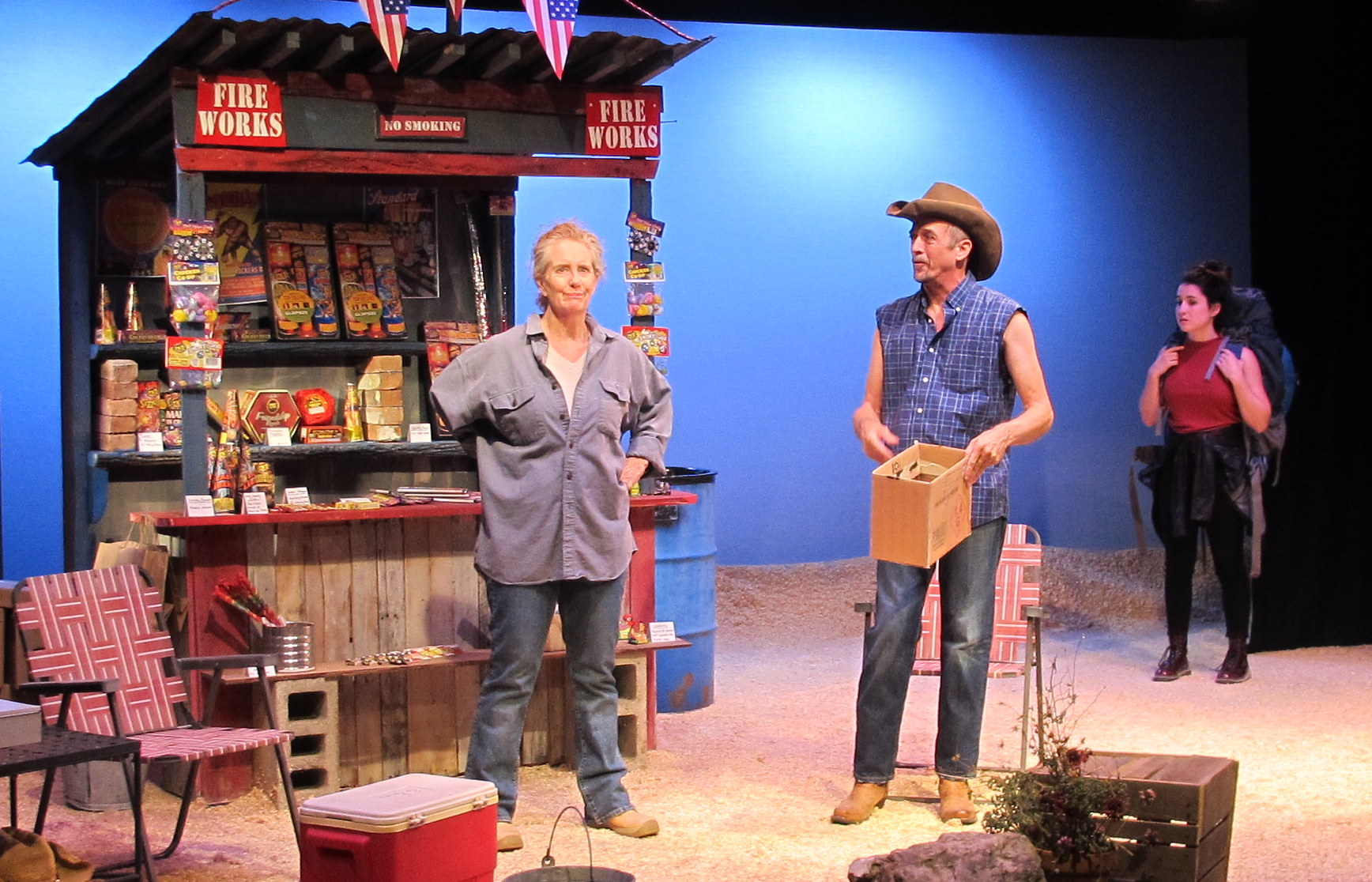 One of the most emotionally affecting scenes of the recent theatrical season can be found on the stage of the Bridge Street Theatre in Catskill, New York.  In Lewiston, actors Leigh Strimbeck and Daniel Hall Kuhn bring such heartbreaking depth to Samuel D. Hunter’s complex characters that one can only wish this scene will never end.

The play, the second in Bridge Street’s “American roots—Re-awakened” fall season, takes place just outside of Lewiston, Idaho, named after Meriwether Lewis, who, with William Clark, led the first transcontinental expedition to the Pacific from 1804-6, exploring and mapping out the Louisiana territory purchased by Thomas Jefferson (Lewis was his Secretary) and claiming the Pacific Northwest and Oregon for the United States.  Hunter, a native of northern Idaho, is a multiple award-winner for his plays The Whale and A Bright New Boise, andthe recipient of a MacArthur “Genius Grant” Fellowship.  Clarkston, a companion piece to Lewiston, written one year earlier, takes place across the Snake River in Washington State.

Lewiston is a study of the relationship among Alice (Leigh Strimbeck), her “roommate” Connor (Daniel Hall Kuhn), a man about twenty years her junior, and her long-estranged granddaughter Marnie (Montana Lampert Hoover).  Alice, a widow, has been gradually selling her 200 acres of land (formerly a cattle ranch begun by her great-great-grandfather) to developers who are building condos (Meriwether Terrace!) and have promised her one if she sells her remaining twenty acres to them.  She and Connor now occupy a small home, supporting themselves by means of a fireworks stand (designed in remarkable detail by John Sowle) and his job at Walgreens.  Enter Marnie, a yuppie who moved to Tacoma years earlier, where she purchased a condemned house that she turned into a sustainable agriculture project—an “urban farm”—and having been bought out has returned, determined to buy Alice’s remaining acres and begin farming there.  Connor, a gay man who feels that Marnie will replace him, decides to move to Pocatello (the title of another of Hunter’s plays), which is a ten hour drive from Lewiston.

Though Strimbeck and Kuhn have fought about almost everything in the course of the play including the pricing of the fireworks, Kuhn’s hyperbolic language describing each one (he insists that he’s the businessman and knows what to say and how to negotiate), the kind of beer he buys, his clothes, and the fact that he didn’t take her to her nephew’s funeral (the last family member who cared about her), it is clear that there’s a real love between them and that they have taken better care of one another than did any member of their dysfunctional families. That is why their parting and Kuhn’s insistence (despite her objections) on thanking Strimbeck for taking him in, is so moving.  In addition to the moment-to-moment performances of the two actors, whose emotions are written on their faces and bodies, even as Strimbeck forces herself not to feel or even to look, Hunter has supplied them with rich back stories and director Sara Lampert Hoover, by separating them, highlights every reaction.

There is one more character in this play, unseen but heard by means of a portable tape recorder carried by Marnie:  she is Marnie’s Mom, Alice’s daughter, whose stirring voice (Molly Parker Myers) chronicles the trek that she took years ago along the trail once followed by Lewis and Clark, shortly before her suicide.  Her vocal presence haunts the relationship between Marnie and Alice.  Strimbeck and Montana Lampert Hoover resemble the fireworks:  ready to explode when they meet and throughout a good part of the play.  Director Hoover has them screaming their frustration simultaneously at one another as actor Hoover expresses her bottled up anger at her grandmother for never being part of her life (she’s twenty-four now) and for refusing to allow her granddaughter to settle down on her land.  Strimbeck, who cares much more than her pride will allow her to admit, will not talk about her deceased daughter, exiting the stage when her name comes up.  Nor will she accept the possibility, set forth by historians, that her distant relative,  Meriwether Lewis, was himself a suicide.  But once Connor has left, the two women begin to find common ground, acknowledging their connection to one another as they listen to the final tape and observe July 4th fireworks (impressively coordinated by light and sound designers Nick Hawrylko and Carmen Borgia respectively).

In their 2014 citation, the MacArthur Foundation praises Hunter’s plays, which explore “the human capacity for empathy and confront the socially isolating aspects of contemporary life across the American landscape.” The Bridge Street Theatre’s production of Lewiston beautifully confirms this assessment.

LEWISTON runs from October 7-17 at the Bridge Street Theatre, 44 W. Bridge Street, Catskill, NY.  Thursdays, Fridays and Saturdays at 7:30 pm, Sundays at 2:00 pm.  For tickets call 518-943-3818 or online at contact@BridgeSt.org.  The performance runs 90 minutes without intermission.  Be prepared to show I.D. and proof of vaccination.  Masks must be worn while in the theatre.