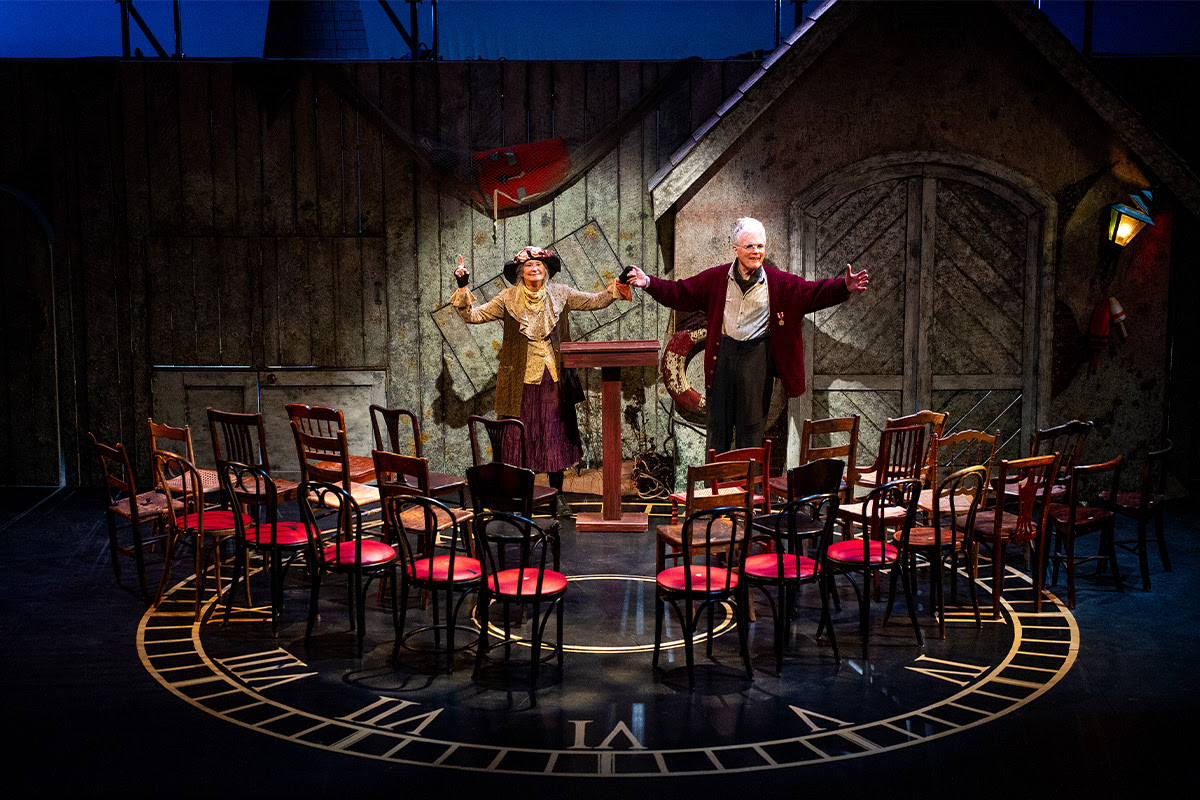 Shakespeare & Company’s production of The Chairs has shaved off Ionesco’s sharp edges, anything unpleasant or uncomfortable, focusing instead on the relationship between an Old Man (Malcolm Ingram) and Old Woman (Barbara Sims) who have been married for seventy-five years.

The Old Woman begs her husband to tell the same story they have been laughing about every night, though it describes Paris, the city of light, being extinguished, along with the garden that led to it.  However, this night is different from all others because the couple is planning a farewell party for themselves.  The Old Man will reveal his message to their guests by means of an Orator he has hired to communicate it.  Once the Orator has arrived, the couple, who live in a lighthouse surrounded by water, will be free to end their lives, knowing that this message, which the Old Man has spent his life preparing, will save the world (or what is left of it).

Eugene Ionesco, a Romanian-French playwright born in 1909 who eventually settled in France, began writing several short French plays in the early 1950s including The Bald Soprano, The Chairs, and went on to write full-length plays, among which is the much-produced Rhinoceros.  Martin Esslin, in his seminal book, The Theatre of the Absurd, quotes Ionesco’s definition of this term:  “Absurd is that which is devoid of purpose. . . .Cut off from his religious, metaphysical, and transcendental roots, man is lost; all his actions become senseless, absurd, useless.”

Beginning after the horrors of World War II, existentialists like Sartre and Camus spoke of the irrationality of the human condition but  nevertheless wrote logical, lucid plays.  Ionesco, Beckett and others, instead of arguing about absurdity, found a visual way to present it, using concrete stage images and comic situations to confront us with the futility of human endeavor by writing irrational, illogical plays whose audiences often didn’t understand what was happening but flocked to see them.  Ionesco subtitled The Chairs:  “A tragic farce,” claiming Charlie Chaplin, the Marx Brothers, and the Keystone Cops as his inspiration.

In order to achieve Ionesco’s purpose, this play must include both elements.  Albert Bermel, who wrote Farce:  A History from Aristophanes to Woody Allen, points out that tragedy and farce “blend so subtly that it is hard, until the end of the play, to be sure which of them predominates.” The set, as described in great detail by Ionesco, is a semi-circle with ten doors and two windows.  This is because the Old Man and Old Woman (Semiramis) are constantly running in and out of the doors to search for and bring in more chairs for the thirty-two arriving guests, who are invisible. This is the stuff of nineteenth-century farce:  a plethora of exits and entrances, boats splashing to reach the island, bells ringing, Semiramis handing out programs and selling Eskimo pies, in an accelerating climax of sound and movement, as the old couple finds themselves separated more and more by the dozens of chairs and their supposed occupants.  Set designer John Musall, though hampered by the configuration of the Tina Packer stage, managed to build double doors, a single door and even some cupboards that opened.  On the stage floor is a circular design that perhaps indicates Ionesco’s set drawing.

Ingram and Sims are wonderful—they have obviously worked in depth with the director (James Warwick) to establish the identity of each non-existent guest, where they sat, and what they were saying (we could of course only hear one half of the conversations).  Semiramis (the Assyrian-Babylonian counterpart of the Great Mother–the most worshipped mother deity in Eastern Asia), is a faithful helpmeet to her husband, but as she is reminding him of what a genius he is she lets him know that he could have reached great heights if he had gotten along with people, instead of ending up as the “general factotum” of the lighthouse.  Their conversation is a mixture of nonsense, contradictions (Did they have a son? Did the Old Man leave his mother in a ditch to die?), repetitions, partial memories, and a return to childhood, as the Old Man becomes an infant, coddled by his wife/mother.  They are a lovable couple, dressed in music hall clothes (Costume designer Charlotte Palmer-Lane), with Semiramis dancing to her husband’s humorous song as he accompanies himself on the ukulele.  Throughout the production Sound designer Amy Altadonna has provided instrumental music hall and circus selections, keeping the mood light, adding more of Ingram’s songs as the audience exits.

But where is the tragedy?  The most revered guest is the Emperor, who arrives amid loud noise and powerful light (thanks to James Bilnoski, Lighting designer, whose contrast of darkness, light and color is impressive), but the Old Man can’t reach him because of all the chairs in his way.  Standing on his toes on a stool to make himself heard, the Old Man addresses His Majesty (who never supported him), listing the many disappointments in his life:  his friends betrayed him with crushing blows while his enemies were rewarded, he never got a chance to travel or to make something of himself, he was fired from every job, he could have saved the world if he had been given an opportunity.  But now that the Orator is coming to deliver his message, his mission will have been accomplished, yet Semiramis sobs, countering hope with doubts, fears and failure.  This section, the stuff of nightmares, was cut.  Too unpleasant for this production?

Finally, the Orator was cut from Ionesco’s script, in which he is the one live character besides the couple.  He is their hope, their only chance of salvation, who will tell all.  Dressed as a nineteenth-century artist, he is left alone onstage after the couple make their supreme sacrifice, trusting that their memory will live on forever.  But the ultimate irony is that he is unable to speak.  Thus the audience, no longer laughing, is confronted by the empty chairs and what they stand for:  “the absence of people, of the emperor, of God, of matter, the unreality of the world. . . nothingness.” (Ionesco)

Without the tragedy, Ionesco’s work has been appropriated in order to entertain an audience who may not be affected by the devastating power of this play.

THE CHAIRS runs from October 8—31 at Shakespeare & Company’s Tina Packer Playhouse, 70 Kemble Street, Lenox, MA.  For tickets call 413-637-3353 or online at shakespeare.org.  Be prepared to show proof of vaccination and ID.

The production runs 65 minutes without intermission.