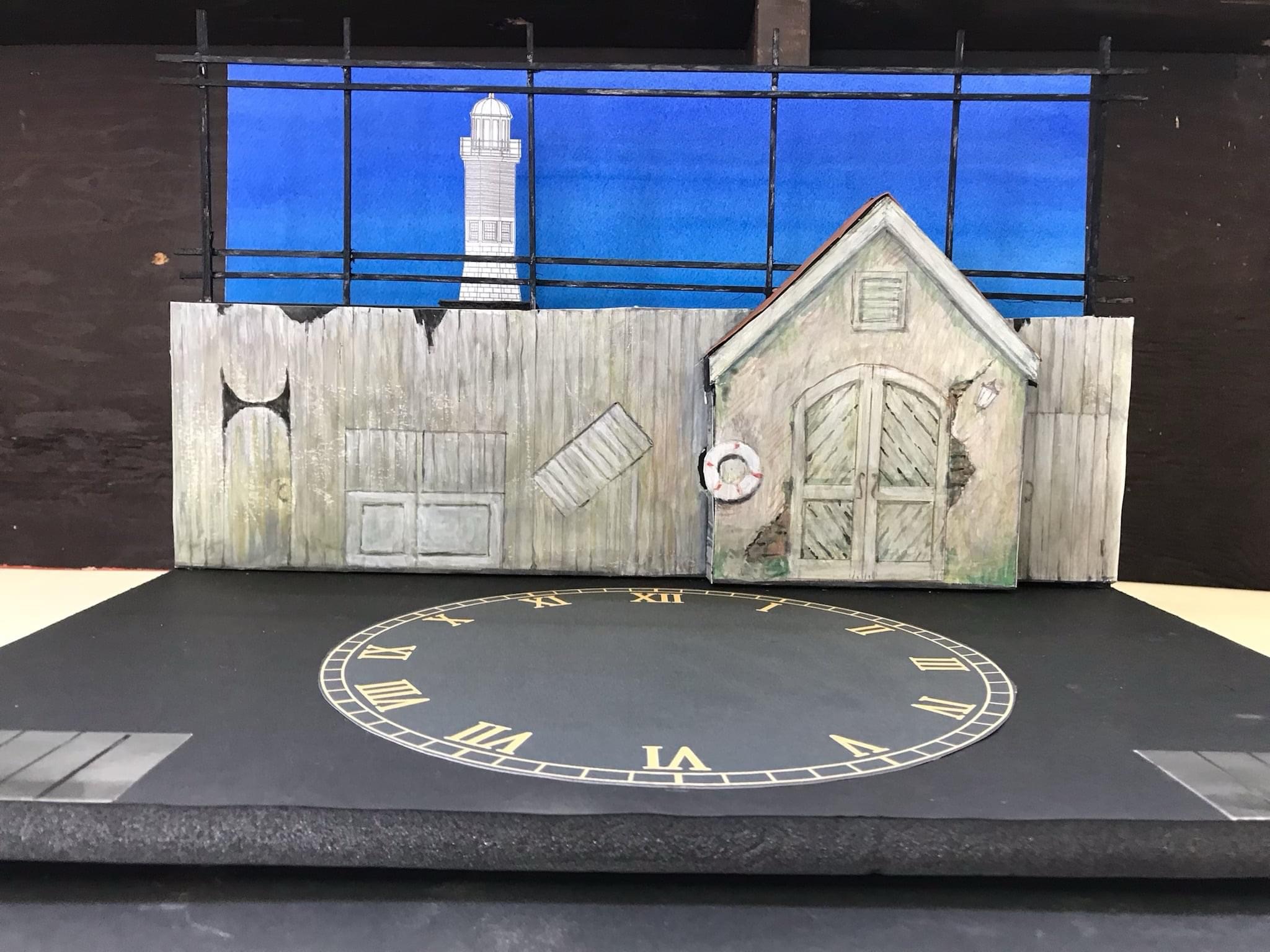 An isolated lighthouse sets the scene for  Eugene Ionesco’s The Chairs at Shakespeare & Company’s Tina Packer Playhouse in Lenox, Massachusetts.  James Warwick has directed a quirky and provocative production of one of the classics of The Theatre of  the Absurd.

The plays of Jean Genet, Samuel Becket as well as Ionesco focus on the existential nature of our lives.  Life   has no substance or direction, therefore no meaning.   The dialogue consists of farcical comments intertwined with moments of repetition, redundancy and dread.  Situations are mocked with a dark undertone going no place.

Ionesco’s journey into the absurd began with the one-act plays The Bald Soprano (1949) The Lesson (1951) and The Chairs (1952) followed by Rhinoceros in 1959.  Though this genre no longer has its original force, elements of absurdism may still be seen in the plays of Sam Shepard, Caryl Churchill and others.

In The Chairs we meet a nonagenarian couple simply called “Old Man” and “Old Woman.”  They banter and reminisce about their marriage of seventy-five years. They speak of what may or may not be a non-existent son.   They cajole each other, she boosts his ego, he cries because he misses his mama whom he may have left in a ditch to die alone.  All of this as they await guests who are gong to be told the meaning of life by an orator as propounded by the old man.  This will be the apex of their lives.

The guests purportedly arrive, and as they do, more and more chairs are brought on by the old couple until they are almost overwhelmed by the numbers of people attending from their photoengraver, to a colonel, to a woman called La Belle and ultimately to The Emperor.  However, neither they nor we see this throng of attendees.

In the original script the Orator appears onstage to address the crowd.  He cannot speak intelligibly.  Warwick felt this was insensitive in today’s world and cut the character creating a different theatrical and succinct conclusion.

The couple, played by Malcolm Ingram and Barbara Sims, are endearing.  As they go through the storm of activity engulfing them we empathize with their frustrations.  He becomes more and more pompous as the guests arrive and she becomes ditzier.  The build of these attitudes is subtle due to their work guided by director Warwick.  Their speech is sometimes broken or stammered redolent to what age can do to us.  Ingram and Sims’ performances are to be relished.

Director Warwick has kept the madness under control so that the play is touching while humorous yet not overblown.  His staging is simple with some comedic moments that allow the couple’s words to resonate.

The set by John Musall has the same well-worn look and idiosyncrasies as the couple.  Various sized doors pepper the upstage wall along with the placement of several set pieces all painted in a washed-out gray.  Amy Altodonna’s sound welcomes the audience with quirky music setting the initial tones of the play and continue to underscore the various moments.  An engaging scene has the old man accompanying himself on a ukulele as she dances to his jocular song.  As the quests arrive at the lighthouse we hear the sound of the alleged boats approaching and splashing through the waters.

The lighting, designed by James Bilnoski, subtly follows the couple through the room as more and more people arrive keeping the old folks in our focus.  Charlotte Palmer-Lane’s costumes draw differences between his casual sense of order and her whimsy.

Though written in the mid-twentieth century, Warwick’s program notes state “… a perfect description of life in general recently…”  How perceptive and how true.