REVIEW: “The Mountaintop” at the Weston Playhouse Theatre Company 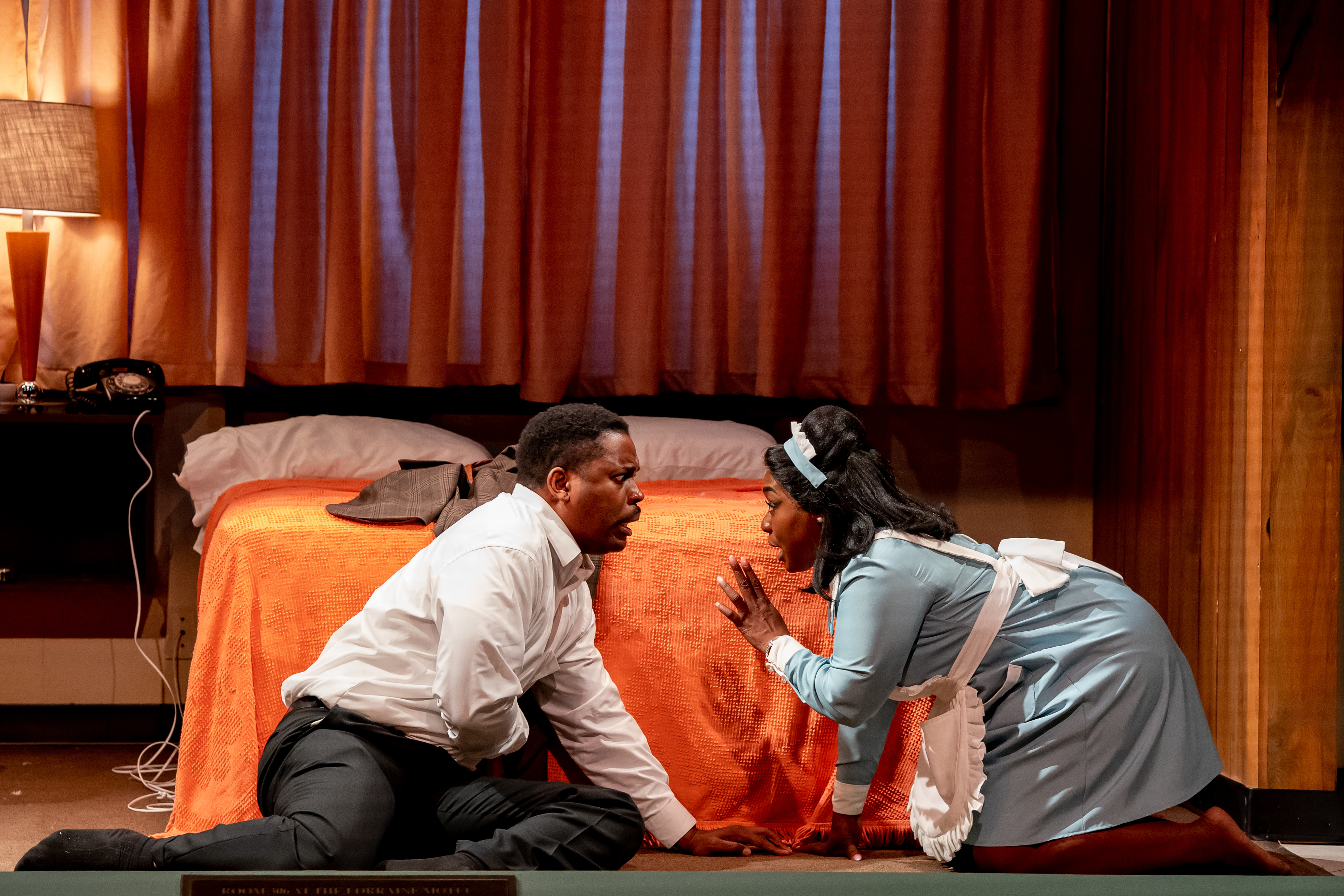 REVIEW: “The Mountaintop” at the Weston Playhouse Theatre Company

The setting for THE MOUNTAINTOP is extremely specific: Room 306 at the Lorraine Motel, in Memphis, Tennessee. The date, April 3, 1968, is full of significance. It is the day before the Reverend Dr. Martin Luther King Jr. would be assassinated on the balcony of the motel. This unique drama begins in that historical moment, right after King had delivered his prophetic “I’ve Been to the Mountaintop” address at a rally in support of the black sanitation workers and takes us through the final night of his life.

The Weston Playhouse Theatre Company‘s production of this fascinating play by Katori Hall sizzles with intensity and the passion of that iconic figure of the Civil Rights movement and American history, but this is no mere biopic. Rather it is a fantasia—an imagined fiction about a great man, a towering figure who is, nonetheless, flawed. King enters after his performance at the rally and we quickly see his weariness and pain. His speech has focused on the struggles so far and his personal price has been a weakened heart. He craves coffee and a cigarette and is already scribbling away ideas for his next speech—envisioning the battles to come. Although room service has closed, after a call to the desk, a young woman arrives with a cup of hot coffee. She is a young and attractive motel maid named Camae and she is as giddy as a schoolgirl to meet the esteemed Reverend King. We see an immediate connection as Camae provides King with a much-needed cigarette (or two or three) and even liquor from her pocket flask. She is, by turns, kittenish, then seductive, then foul-mouthed, then strongly resistant to the flirtatious overtures of the great man.

Outside it is pouring rain and King is waiting for his roommate to arrive, but Camae has the ability to get him to reveal himself—even his deepest fears and grandest dreams. We cannot ignore that Camae is not all she seems to be. Rather she is much more than we can discern. This dramatic work encompasses tremendous joy, stark terror, sexual tension, philosophical bantering, and passionate oration, all wrapped up in a mystery. And because it is a mystery, it would not be right to reveal the intricate secrets that slowly unwind like a long thread. But you can be sure that THE MOUNTAINTOP is an interpretation of the famous man like none other. Through the long night the playwright takes us to King’s mountaintop, to his vision, and to his fears and anxiety that it will all be lost if he cannot continue to carry the banner.

The cast is absolutely superb. Neil Dawson plays Dr. Martin Luther King, Jr. with his whole being and Maechi Aharanwa, as Camae, matches him every minute. The two never flagged in their energy and drive, but also took time for the tender moments and worked together beautifully. Ms. Aharanwa captures Camae in all her many facets—changing directions on a dime, continually surprising us. Mr. Dawson has a fine, rich voice worthy of an orator and is convincing as the iconic hero we remember but he also elicits our compassion as he cowers in fear and paranoia. Both actors find the humor and charm as well as the force and conviction of their characters and it is not surprising that they bring us to tears before the night is out.

According to the program, Director Raz Gordon’s work focuses on “narratives that explore shared cultural histories and myths that center people of color.” In staging THE MOUNTAINTOP, he has made all the right choices. He has balanced the characters so they both sustain the drive of the play without one overpowering the other. His staging of Camae’s first entrance adds intrigue and foreshadows the mysteries to come, just as his staging of the scene where King tears the room apart is masterful. He used the space fully and every moment rings true.

An amazing team of designers has fully supported the director and performers. The setting designed by Frank J. Oliva is surely one of the finest presented this season on any stage in the Berkshires. The main set of the motel room literally looks like it was dismantled in Memphis and moved to the Weston stage. The seedy room of salmon pink drapes and bedspreads, the weather-stained windows, the bare pipes under the sink in the room, the coffered ceiling and 1960’s fixtures—all could make a perfect, realistic setting for the actual time and place. But Oliva adds a lime green picture frame around the whole stage and sliding translucent panels across the proscenium, which initially mute the photographic setting behind them and alert us that all may not be what it seems. The first entrance of King is marked by an alarming crack of thunder which we might think was a gunshot if not for the flash of lightening that follows it. It is ominous and sobering. Kudos to Austin Boyle for the most effective lighting design and to Carsen Joenk for an evocative and precise sound score.

For anyone looking for an authentic documentary about King’s last night on earth, or to see an actor attempt to reproduce the look and sound of the actual man, THE MOUNTAINTOP may disappoint. This play is working on an entirely different level. It is an imagining of something else and the freedom that playwright Hall has in creating this fantasia is undoubtedly fascinating and illuminating in ways a “museum” approach cannot attain. The audience was on its feet immediately at the end of the performance—a standing ovation richly deserved by this superlative creative ensemble.