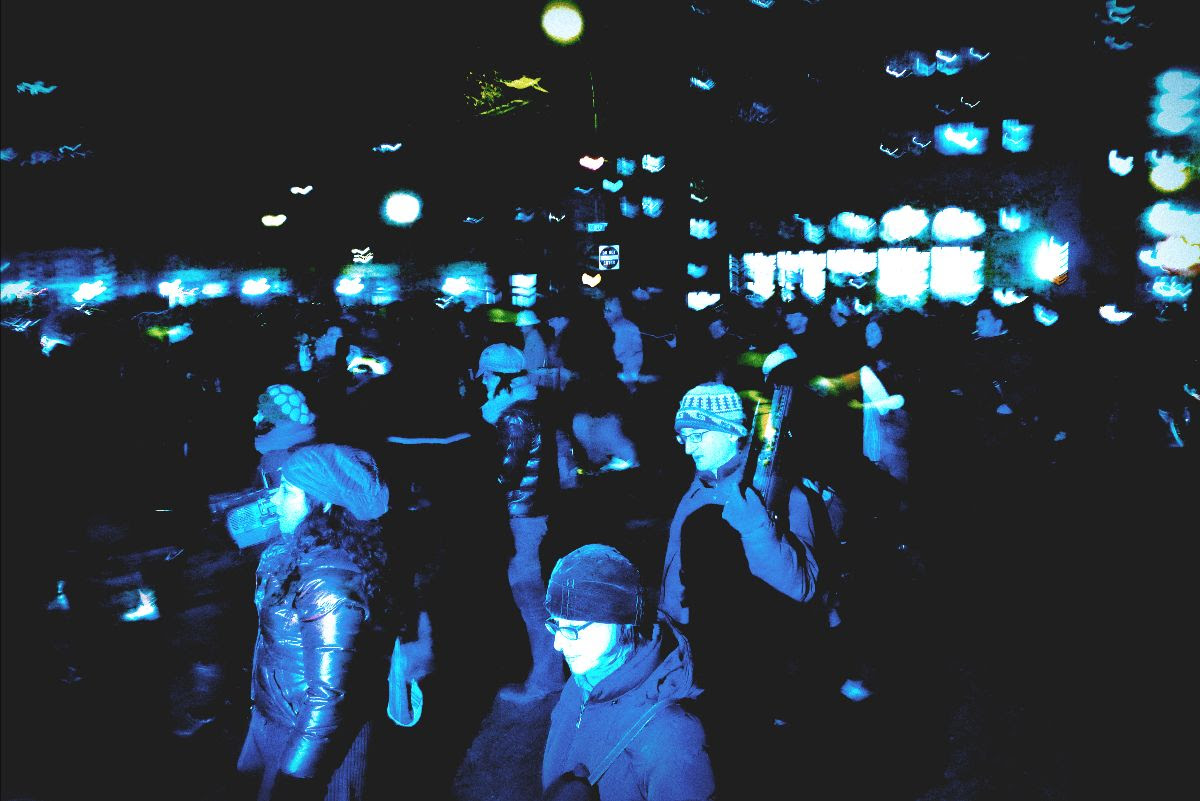 This December, composer Phil Kline’s mobile surround sound-sculpture UNSILENT NIGHT — a landmark in avant-garde public sound art — takes place in more than 35 cities across the United States, Canada, and Europe. Streets, parks and sidewalks will come alive with “a shimmering sound-wall of bells and chimes that is dreamlike to wander through in the December nip” (The Village Voice).

At Art Omi in Ghent, NY, on December 4 at 5:30 pm, and Williamstown, MA, on December 9 at 6 pm at the ’62 Center at Williams College, Phil Kline will lend out vintage boomboxes from his collection—and cassettes for those who bring their own

Unsilent Night has spread around the world primarily through word of mouth. It is simple to present and participate in, and beautiful not just for what The New York Times calls its “phosphorescent sound” but because of the sense of community it fosters. Each person carries only one part of the electronic score, but collectively the group creates the emotionally enveloping experience—like players in an orchestra.

Unsilent Night responds to the unique qualities of each location and community: the people, architecture, lay of the land, weather. Examples this year:

Kline’s luminous 4-track surround soundscape is performed by the public on boomboxes and smart phone sound rigs carried through streets, parks, woods, underpasses, or wherever the event is planned

Each person carries just one of the four tracks

The magic begins when the crowd hits PLAY at the same time, collectively launching individual streams of shimmering electronic bell-tones into the dark night, as the players set off joyously on foot (or bicycles, as in San Marcos this year)

Anyone can participate:
Download in advance one of the 4 sound files or app,
then amplify a phone with a bluetooth speaker
— or go analog with a boombox cassette player (if lucky enough to find one)

To prevent the spread of COVID-19, we ask all participants to
• wear a face covering
• maintain distance between yourself and others not in the same household
• stay home if sick or exhibiting symptoms

Unsilent Night is featured in this week’s THE NEW YORKER:“New Yorkers have been gathering for Phil Kline’s ‘Unsilent Night’ since 1992, but his work is uniquely suited to these pandemic times. The free, outdoor event began as a modern-day update to carolling: instead of singing, participants set off from Washington Square Park carrying boom boxes, each blaring one of the composition’s four instrumental parts, which commingle in the winter air as an atmospheric cloud of electronics and samples. Nowadays, most carollers attach speakers to their smartphones, but Kline still loans out his vintage Panasonic stereos to those who are susceptible to nineties nostalgia.”

“Immerses the listener in suspended wonderment, as if time itself had paused inside a string of jingle bells.”
— THE NEW YORK TIMES

From vast boombox symphonies to chamber music and song cycles, Phil Kline‘s work is known for its originality, beauty, sly subtext, and wry humor. Raised in the suburbs of Akron, Ohio, Phil came to New York City to study poetry with Kenneth Koch and David Shapiro at Columbia. Shortly after graduation, he moved to the East Village, cofounded the rock band the Del-Byzanteens with Jim Jarmusch, James Nares, and Luc Sante, collaborated with Nan Goldin on the soundtrack to The Ballad of Sexual Dependency, and played guitar in the notorious Glenn Branca Ensemble.

Some of his early compositions evolved from performance art and used large numbers of boomboxes, such as Bachman’s Warbler and the outdoor Christmas cult classic Unsilent Night, which is now an annual holiday tradition celebrated around the world. Other notable works include Exquisite Corpses, written for the Bang on a Can All-Stars; the politically-infused Zippo Songs and Rumsfeld Songs;John the Revelator, a setting of the Latin Mass written for early music specialists Lionheart; and the Sinatra-inspired song cycle Out Cold, written for Theo Bleckmann and premiered at BAM’s Next Wave Festival. Phil is currently immersed in songs and music theater, including a third song cycle for Bleckmann, Florida Man, and lives and dreams of Nikola Tesla as enacted by the honorable spirits of the Grand Gotham Hotel, an opera in collaboration with filmmaker Jim Jarmusch.

His music is available on the Cantaloupe, Starkland, Innova, and CRI labels.