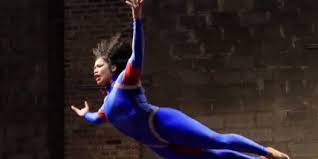 The stream will be available Dec. 1-Jan. 6

Nov. 23, 2021 — BECKET, Mass. — A special edition of the STREB Extreme Action Company’s 2021 Jacob’s Pillow Dance Festival performance, featuring a unique retrospective of Elizabeth Streb’s work from the 70s and 80s alongside bonus behind-the-scenes content and archival footage, will be available as part of a Holiday Stream offered through the Pillow this holiday season. Tickets are on sale as of Nov. 15 and cost $15.

The performance will feature nearly 50 minutes of STREB Extreme Action Company’s performance on the outdoor stage at Jacob’s Pillow this summer, which marked the company’s first return in over 20 years. The works feature STREB’s signature style that combines bravery and sheer athleticism.

“Imagine their glee to be performing… on the Pillow’s outdoor stage, where, finally, for this high-flying group, the sky is literally the limit,” wrote Janine Parker in a Boston Globe review of the performance. “They bounce and fly, straight up, straight down, or tucked or twisting like Olympic divers into a pool, or elegantly angled and arced like fish into the sea, or birds swooping into infinity.”

In the performance STREB: From Ringside to Extreme Action, the company revisits a number of its early works, including a collection of founder and artistic director Elizabeth Streb’s classic solos from the 1970s-80s and several of her early equipment experiments from the 90s, placing them in direct contrast with the jaw-dropping extreme action opuses and large scale “action machines” the company has become known for in the 21st century. The performance stream also features Elizbeth Streb’s voice-overs.

In addition to a special edit of the works performed this summer, the stream will feature bonus behind-the-scenes content, highlighting the company’s action heroes as they prepared to perform on stage, as well as archival footage of founder Elizabeth Streb, and a STREB artist giving a breakdown of how the action heroes are taught to fall and carry out stunts safely.

“This summer, we welcomed Elizabeth and STREB to Jacob’s Pillow in  a once-in-a-lifetime production where we were able to witness the company’s uniquely spectacular and energetic spirit against the dramatic backdrop of the Berkshire hills, showing audiences how the action heroes move in spaces where bodies have not been before,” said Pamela Tatge, Executive and Artistic Director of Jacob’s Pillow.

“For over four decades, STREB has defied the status quo and has shown us what’s possible. Their program at the Pillow is a true showcase of the journey they’ve taken to arrive at the remarkable company they are today.”

To purchase tickets and receive a unique link for the Jacob’s Pillow 2021 Holiday Stream performance of STREB, visit jacobspillow.org/events/holiday-stream-streb/. The Holiday Stream will be available to view from 7:30 p.m. on Dec. 1, 2021 through 11 p.m. on Jan. 6, 2022.

ABOUT STREB EXTREME ACTION COMPANYFor over forty years, STREB Extreme Action Company has performed in theaters large and small, served as artists-in-residence at the world’s top art museums, and taken its work into the streets and sports stadiums. The company’s extensive international touring calendar has included presentations at the Louvre Abu Dhabi, the Théâtre du Châtelet, the Musée D’Orsay, Greece’s Summer Nostos Festival, Théâtre de la Ville, Lincoln Center Festival, the Park Avenue Armory, the Fall for Dance Festival, Wolf Trap Foundation, the Walker Art Center, Los Angeles MOCA, the Wexner Center, Spoleto USA, the River-to-River Festival, the Brisbane and Melbourne Festivals and in Chile, Singapore, and Taiwan. The company has received commissions to perform publicly at the 2012 London Olympic Festival, the 2010 Vancouver Olympics, the Whitney Museum of American Arts groundbreaking, the Pan Am Games Arts Festival in Toronto, and the 2004 Cirque du Soleil 20th anniversary celebration performed in front of 250,000 people on the streets of Montréal. The company has also taken their signature extreme action to iconic locations including Grand Central Station, Coney Island’s fairground, the Brooklyn Bridge Anchorage, Madison Square Garden, the mall outside the Smithsonian Institution, the Minneapolis Metrodome, and more.

In January 2003, STREB moved into a vacant former loading facility and transformed 51 North 1st Street in Williamsburg, Brooklyn, into the STREB LAB FOR ACTION MECHANICS (SLAM) which now serves as the home of STREB EXTREME ACTION, the STREB PopAction School, and the España-STREB Trapeze Academy. As a performance and presenting venue and an open access education and rehearsal space, SLAM creates community through interaction and experimentation.

Each year, STREB typically welcomes more than 10,000 people to SLAM: over 5,000 audience members, almost 1,000 students weekly from toddlers to adults, 3,000 children come from NYC public schools and community organization constituents, including at risk youth, more than 200 working artists who rent space at SLAM to create and present work, teach or take a class. STREB is a neighborhood economic engine, employing 150 local artists, technicians and administrators.

Prior to the 2021 Festival, STREB, formerly known as Streb/Ringside, performed at the Pillow’s Ted Shawn Theatre in 1997 as part of the Dance & Sports Week. Elizabeth Streb also participated in a 1997 PillowTalk entitled Dance and Sports alongside choreographers Susan Marshall and David Dorfman and former New York Yankees pitcher Jim Bouton. More recently, Streb made a personal appearance at the Pillow in conjunction with a 2015 screening of the documentary film, Born to Fly.

Jacob’s Pillow is a National Historic Landmark, recipient of the National Medal of Arts, and home to America’s longest-running international dance festival, currently in the midst of its transition to becoming a year-round center for dance through a five-year strategic plan titled Vision ‘22. Jacob’s Pillow rests on the traditional lands of the Agawam, the Nipmuc, the Pocumtuc, and the Mohican and honors their elders past, present, and future. Each Festival includes more than 50 national and international dance companies and over 500 free and ticketed performances, talks, tours, classes, exhibits, events, and community programs. The School at Jacob’s Pillow, one of the field’s most prestigious professional dance training centers, encompasses the diverse disciplines of Contemporary Ballet, Contemporary, Tap, Photography, Choreography, and an annual rotating program. The Pillow also provides professional advancement opportunities across disciplines of arts administration, design, video, and production through seasonal internships and a year-round Administrative Fellows program. With growing community engagement programs, the Pillow serves as a partner and active citizen in its local community. The Pillow’s extensive Archives, open year-round to the public and online at danceinteractive.jacobspillow.org, chronicle more than a century of dance in photographs, programs, books, costumes, audiotapes, and videos. Notable artists who have created or premiered dances at the Pillow include choreographers Antony Tudor, Agnes de Mille, Alvin Ailey, Donald McKayle, Kevin McKenzie, Twyla Tharp, Ralph Lemon, Susan Marshall, Trisha Brown, Ronald K. Brown, Wally Cardona, Andrea Miller, and Trey McIntyre; performed by artists such as Mikhail Baryshnikov, Carmen de Lavallade, Mark Morris, Dame Margot Fonteyn, Edward Villella, Rasta Thomas, and hundreds of others. On March 2, 2011, President Barack Obama honored Jacob’s Pillow with a National Medal of Arts, the highest arts award given by the United States Government, making the Pillow the first dance presenting organization to receive this prestigious award. The Pillow’s Executive and Artistic Director since 2016 is Pamela Tatge. For more information, visit www.jacobspillow.org.