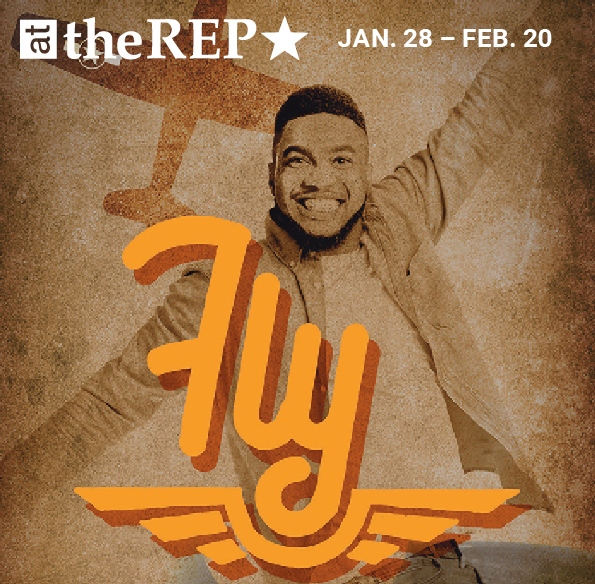 Albany, NY (Jan. 21) – FLY, the celebrated drama about the Tuskegee Airmen, the first Black American military aviators in the United States Armed Forces, will open at Capital Repertory Theatre for previews on January 28. The production runs through February 20.  Written by Trey Ellis and Ricardo Kahn, FLY tells the story of the World War II squadron of Black American pilots who flew wartime bomber and escort missions. FLY is told through a combination of traditional drama, spoken-word narration and dance. The production is directed by internationally- acclaimed director Clinton Turner Davis and choreographed by Tony Award-nominated choreographer Hope Clarke.

Between 1941 and 1946, roughly 1,000 Black pilots were trained at a segregated air base in Tuskegee, AL, giving them the name of their squadron. The Tuskegee Airmen flew 1,578 combat missions and were renowned for their service as escort units for other bomber crews.  Also known as the “Red Tails” for the distinctive crimson color of their aircrafts’ tail sections, the Tuskegee Airmen proved to be among the most effective and celebrated squadrons in World War II. FLY depicts how they overcame the dangers of war abroad and the obstacles of racial prejudice at home.

In the play, their story is augmented through a combination of dance and spoken-word narration performed by a griot, a traditional African storyteller-bard.

Clinton Turner Davis has directed off-Broadway productions for the Negro Ensemble Company, Theatre Four and numerous other theatres in New York, and at numerous regional theatres, colleges and universities in the United States and Taiwan. He has also served as director of the American Young Playwrights Festival and is the recipient of numerous awards. Hope Clarke has collaborated with director George C. Wolfe twelve times and is a recipient of the Outer Critics Circle Award. In 1993, she was nominated for a Tony Award for her choreography in the Broadway hit Jelly’s Last Jam.

The cast features four newcomers to Capital Repertory Theatre in the roles of the Airmen, Yao Dogbe, Trevor McGhie, Jeremiah Packer and Calvin Thompson. The griot is portrayed by acclaimed tap artist Omar Edwards, who originated the role and has performed it across the country. Torsten Hillhouse, last seen in Capital Rep’s productions of Doubt and Other Desert Cities, plays the veteran flight trainer Captain O’Hurley.  Rounding out the cast are Shayne David Cameris and, in his Capital Rep debut, Ryan Fuchs.

This performance features sign language interpreters. To request access to the designated seating section, please call the box office at 518.346.6204

This special conversation is free and open to the public.

There are limited parking spots available on the street in direct proximity to the theatre.

Parking is available at the Quackenbush Garage (25 Orange Street, adjacent to 677 Prime Restaurant) with complimentary transportation (Capital Repertory/Proctors transportation van) from the bus stop outside of the garage every 20 minutes, starting one hour before the performance. Look for the van with the theatre posters at the bus stop at Broadway and Orange Streets. Events at other venues may result in fees for garage parking.