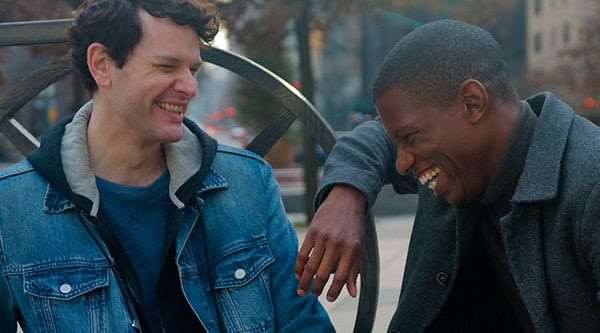 TheaterWorks Hartford is proud to present THIS BITTER EARTH from 2018 Relentless Award-winning playwright Harrison David Rivers. Directed by David Mendizábal, this new play centers on a multi-racial gay couple whose deep love is challenged by divisive political realities. Running February 16–March 20 in-person, with an opening on February 20, and streaming on demand March 7-20, This Bitter Earth stars Tom Holcomb and Damian Jermaine Thompson. Tickets are now on sale at www.twhartford.org.

Jesse (Thompson), an introspective black playwright, finds his choices called into question when his boyfriend, Neil (Holcomb), a white Black Lives Matter activist, calls him out for his political apathy. As passions and priorities collide, this couple is forced to reckon with issues of race, class, and the bravery it takes to love out loud.

Playwright Harrison David Rivers remarks, “When first commissioned to write THIS BITTER EARTH, I was asked, ‘Can you talk about what it’s like to move about the world in a Black body during these times?’ In 2021, the same question is still being asked, and an answer is still hard to find. What has carried through, though, is the importance of moments of love – large and small – between the moments of struggle. This Bitter Earth is a love story about two men finding each other and finding their voices in an extremely challenging time, and the ways in which their love changes them forever.”

Director David Mandizábal commented, “We live in a time in which all of our choices are politicized within an imaginary binary. Likewise, many of our society’s systems uphold a polarized “black or white” way of thinking, created to highlight and enforce our differences. But it is in the gray areas – where two truths exist in the same breath – that we have the potential to find real understanding and recognize the multitudinous intersections of our own humanity. Revisiting this play in 2022, after more than two years of loss, uncertainty, isolation and a long overdue reckoning, set off by a global pandemic and the continued violence against Black bodies, I’m struck by the poignancy of this work to reflect both the past and the current dilemmas we face as a society.”

The performance schedule is Wednesdays and Thursdays at 7:30pm and Fridays and Saturdays 2:30pm and 8pm with no 2:30pm performance on February 19, and additional performances at 2:30pm on March 10 and 17.

THIS BITTER EARTH contains partial nudity and mature language/themes. The running time is 100 minutes with no intermission.

TheaterWorks Hartford is a fully vaccinated house and requires all patrons to show proof of vaccination and to be fully masked inside the building.

Harrison David Rivers (Playwright) is an award-winning playwright, librettist and screenwriter. His plays include The Bandaged Place (Relentless Award), When We Last Flew (GLAAD Award), Sweet (AUDELCO nominee), Where Storms Are Born (Berkshire Theatre Award nominee), This Bitter Earth (Jeff nominee, MN Theatre Award) and the musicals Five Points with Douglas Lyons and Ethan Pakchar (MN Theatre Award) and Broadbend, Arkansas with Ellen Fitzhugh and Ted Shen (Antonyo and AUDELO noms). Harrison was named a runner-up for the 2018 Artist of the Year by the Star Tribune and a 2017 Artist of the Year by City Pages. He is the recipient of McKnight, Jerome and Van Lier Fellowships, and residencies with the Bogliasco Foundation, Siena Art Institute, the Hermitage, Duke University, NYTW, New York Stage & Film and the Williamstown Theater Festival. Harrison is a member of the Board of Directors of the Playwright Center and The Movement Theatre Company. He lives in St. Paul, Minnesota. harrisondavidrivers.com

David Mendizábal (Director) is a director/designer, one of the Producing Artistic Leaders of the Obie Award-winning The Movement Theatre Company and the Associate Artistic Director of The Sol Project. Select directing credits include: Don’t Eat the Mangos (Magic Theatre/Sundance/Sol), On The Grounds of Belonging (Long Wharf), the bandaged place(NYSAF), Then They Forgot About The Rest (INTAR), The Maturation of an Inconvenient Negro (Cherry Lane Mentor Project), And She Would Stand Like This (w/ choreo by Kia LaBeija), Look Upon Our Lowliness, Bintou (The Movement) and Tell Hector I Miss Him (Atlantic / Drama League Nomination). David is a 2021 Princess Grace Award Honoraria Recipient in Theater. They were part of the inaugural Soho Rep Project Number One Residency, where they created and directed the short film, eat me!. Alumnus of Ars Nova Vision Residency, The Drama League Directors Project, LAByrinth Intensive Ensemble, NALAC, artEquity, and Lincoln Center Directors Lab. David was a participant in the TCG Leadership U: One-on-One program from 2017 – 2018, where he was the Artistic Associate at Atlantic Theater Company. davidmendizabal.com

Damian Jermaine Thompson (Jesse) is a classically trained stage, film, and television actor. Born in Kingston, Jamaica and partly raised in Miami, FL, he now resides in New York City. Mr. Thompson is a 2018 NAACP award winner for his performance in Fly at the Pasadena Playhouse, and a 2012 Drammy Award winner for his performance in the Brother/Sister Plays at Portland Playhouse in Oregon. He has had the pleasure of performing for both the Obama’s and the Clinton’s at the Ford’s Theatre in Washington DC and Off-Broadway in New York City. His short film BLACK? (for which he wrote, produced, and co-starred in) won best film at the New York Premiere film festival, and was an official selection at numerous festivals including the International Black Film festival, the Orlando Film Festival, and the Albuquerque Film Festival. His work can be seen in the upcoming National Geographic special Clotilda: The Last Slave Ship and the upcoming Netflix feature Wedding Season. Facebook/Instagram: damianthompsonactor

Celebrating its 36th season, TheaterWorks Hartford (TWH) produces high quality, contemporary theater that is relevant to our audiences, engages a diverse community, and provides insight into the human experience. TheaterWorks is committed to the power of storytelling in creating community. Founded in 1985, TheaterWorks has produced over 170 plays and presents approximately 225 performances per season. TheaterWorks also owns and manages the historic property at 233 Pearl Street, known as City Arts on Pearl.