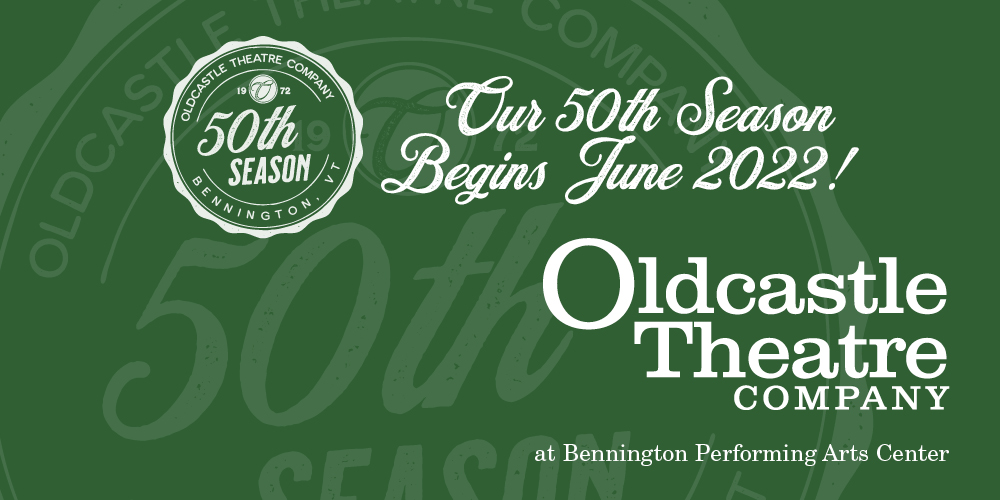 Oldcastle Theatre Company, the professional theatre company in residence at the Bennington Performing Arts Center in downtown Bennington, Vermont, is thrilled to announce its 50th season of professional theatre. “After several years of transition and a highly successful 2021 season, we are so excited to celebrate 50 years of professional theatre at Oldcastle Theatre Company,” says Artistic Director, Nathan Stith. “The productions we’ve chosen for this season acknowledge our long tradition of bringing intimate, entertaining and moving work to the stage,” says Stith.

The four-production season will run from June to September, including a holiday show in December. “We continue our commitment to making professional theatre as accessible as possible,” says Bennington Performing Arts Center Executive Director, Jennifer Jasper. “General admission tickets will remain at $25 per performance and we are continuing our very successful ‘Pay What You Will Night’ for Wednesday night performances. In addition, we are adding a Thursday matinee performance for each production,” says Jasper.

The season will open June 17 with “Souvenir” by Stephen Temperley and directed by Nathan Stith. “It’s a play which celebrates the artistic endeavor in both hilarious and heart-warming ways” says Stith who will direct the production. It is the story of the infamous socialite and musical cult-figure, Florence Foster Jenkins, who suffered under the delusion that she was a great coloratura soprano. Unfortunately, she couldn’t sing at all. Despite this, or maybe because of it, her annual concerts at the Ritz Carlton hotel brought her extraordinary fame while Ms. Jenkins blissfully mistook derisive laughter for cheers. Her celebrity brought her all the way to a solo performance at Carnegie Hall in 1944. Told through the eyes of her longtime accompanist Cosme McMoon, “Souvenir” is a touching and hysterical story of an eccentric woman who believes so strongly in her talent that she convinces everyone of the beauty heard in her head all along. The production will run June 17-26.

The second show, running July 22-31, is “Fully Committed” by Becky Mode and directed by BPAC Executive Director, Jennifer Jasper. Winner of the 2016 Tony Award for Best Solo Performance, “Fully Committed” follows Sam Callahan, an out-of-work actor, who runs the red-hot reservation line at Manhattan’s number-one restaurant. Sam is swamped with calls from desperate customers begging for a table while also dealing with both personal and professional drama. Can Sam juggle scheming socialites, name-dropping wannabes, fickle celebrities, and ego-maniacal bosses while also practicing self-care? One incredibly versatile performer plays forty wildly diverse characters in this devastatingly funny tour de force performance which will tickle your funny bone and touch your heart. “For anyone who has worked in the service industry…this show is for you!” says Jasper, who worked in the restaurant industry for many years.

The third show of the season is “Sheepdog” by Kevin Artigue and will run August 26-September 4. Directed by Bennington College professor Kirk Jackson, who directed the innovative Living Room Theatre production of “A Doll’s House, Part 2” last summer, “Sheepdog” is the story of an interracial relationship between two Cleveland, Ohio police officers, Amina, who is African American and Ryan, who is white. When they fall in love, competing loyalties challenge the future they hope to build, and when Ryan is investigated for an officer-involved shooting, their entire world threatens to collapse. According to Jackson, “It is a play which challenges audiences to candidly examine class, race, love, and that infinitesimal, life-changing moment before a police officer discharges their weapon.”

“We are adding a fourth production to our season this year,” says Stith, “a fully-produced holiday show which we hope will become an annual tradition for our audiences.” Longtime Oldcastle favorite, Christine Decker, will direct “It’s A Wonderful Life: A Live Radio Play” by Joe Landry, running December 9-18. The play takes place on Christmas Eve, 1946, where WBFR Radio in New York City is presenting their live performance of the Frank Capra classic film “It’s A Wonderful Life.” The unforgettable tale of George Bailey and Clarence the angel is brought to life by five incredible actors, playing all of the beloved characters, with live foley sound effects! “We hope our patrons will bring the whole family and return with us to Bedford Falls, New York, to relive their favorite moments from this timeless holiday classic. It’s the perfect way to start the holiday season,” says Jasper.

“Our 50th anniversary season promises to be one of our most successful seasons ever, and we can’t wait to share it with our audiences,” says Stith. Tickets will go on sale beginning February 1. Regular admission is $25 and premium reserved seating can be purchased for $35. Tickets can be purchased online at oldcastletheatre.org/tickets, by phone at 802-447-0564, or in person, 90 minutes prior to each performance. For more information contact the box office or visit us at oldcastletheatre.org.