Two New Suspense Thriller Readings with The Two Of Us Productions 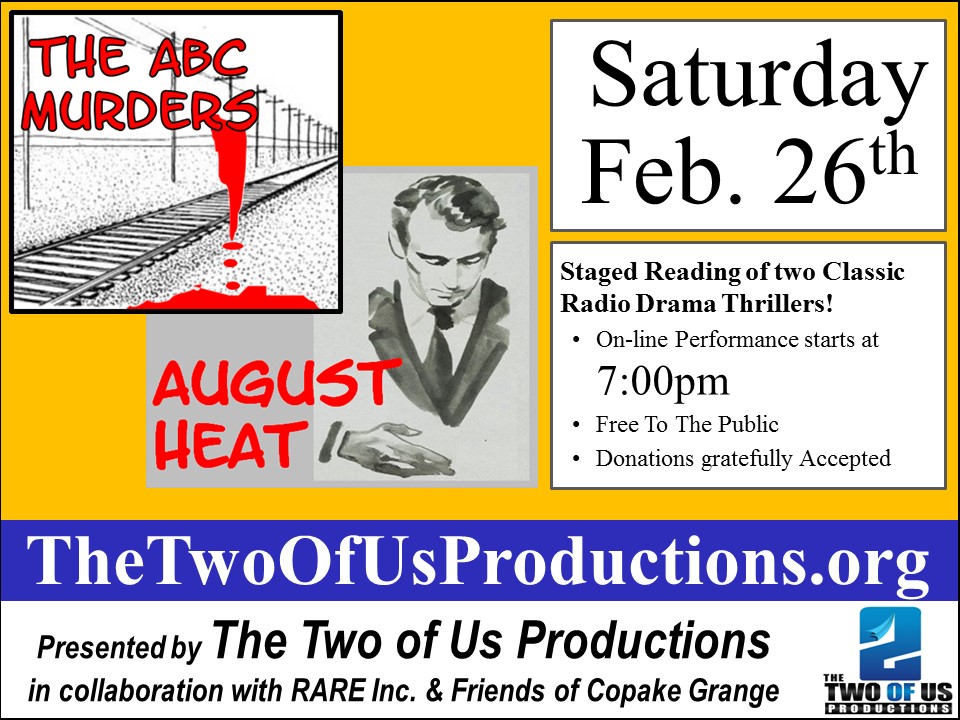 Two New Suspense Thriller Readings with The Two Of Us Productions

WHAT: Virtual Staged Reading of chilling radio dramas from Suspense Theater: “The ABC Murders” and “August Heat”.  Presented by The Two Of Us Productions in collaboration with Friends Of The Copake Grange.

WHERE:  On-line via ZOOM, see both of these thrilling dramas in the comfort of your own home!

TICKETS:  This performance is free to the public, donations are gratefully accepted.  To R.S.V.P and get your access code please visit www.TheTwoOfUsProductions.org

COPAKE, NY —The Two Of Us Productions, the award winning theater company based in Columbia County NY, is pleased to present their Virtual Live-Staged Reading for 2022.  Our 2nd installment is two exciting radio dramas from Suspense Theater: “The ABC Murders” and “August Heat”.  This performance is being presented on Saturday evening February 26th, 2022 at 7:00pm in collaboration with Friends of Copake Grange.

In “The ABC Murders”  we meet Alexander Bonepart Cust, a remarkable character, created by England’s noted thriller author, Agatha Christie.  A mild-mannered character whose initials were ABC.   And ABC was stamped also upon the large railway timetable he always carried.  But there was nothing so odd about that detail since no traveler in the British Isles would dream of planning a journey without consulting this famous railway schedule, the ABC.

In “August Heat”  we are introduced to James Clarence Withencroft, who has been irresistibly driven to draw a picture of a criminal in the dock, immediately after the judge had pronounced sentence.  The picture is remarkably detailed, but he does not know this man!   Walking on a hot summer day, James suddenly comes face-to-face with the man in the picture!

To learn the rest of these thrilling stories you’ll have to R.S.V.P to www.TheTwoOfUsProductions.org and then see these thrilling dramas in the comfort of your own home on Saturday night February 26th, 2022.

“The ABC Murders” and “August Heat” will be performed as a live-virtual staged reading on Saturday February 26th, 2022 at 7:00pm.  Hurry to R.S.V.P and get your access code by visiting www.TheTwoOfUsProductions.org . This performance is free to the public, donations are gratefully accepted.

The Two Of Us Productions is well known throughout the Hudson Valley for presenting quality theater, both musicals and dramas.  Their recent productions of Sweeney Todd, Cabaret, Young Frankenstein, Deathtrap, Chicago, Les Miserables, next to normal, Mamma Mia! and Jesus Christ Superstar were all recognized by the Theatre Association of NYS with multiple awards, including outstanding work by the company & outstanding performance by the orchestra.  Reviews of their recent virtual live-staged readings of three Arthur Miller scripts; All My Sons, Broken Glass, and an adaption of An Enemy Of The People will appear in upcoming editions of The Arthur Miller Journal.

These performances are supported with funds from Hudson River Bank & Trust Foundation, Stewart’s Shops, Bank of Greene County, Rheinstrom Hill Community Foundation, Greylock Federal Credit Union and The American Endowment Foundation.  This project is made possible with funds from the Statewide Community Regrants Program, a regrant program of the New York State Council on the Arts with the support of the Office of the Governor and the New York State Legislature and administered by CREATE Council on the Arts.”