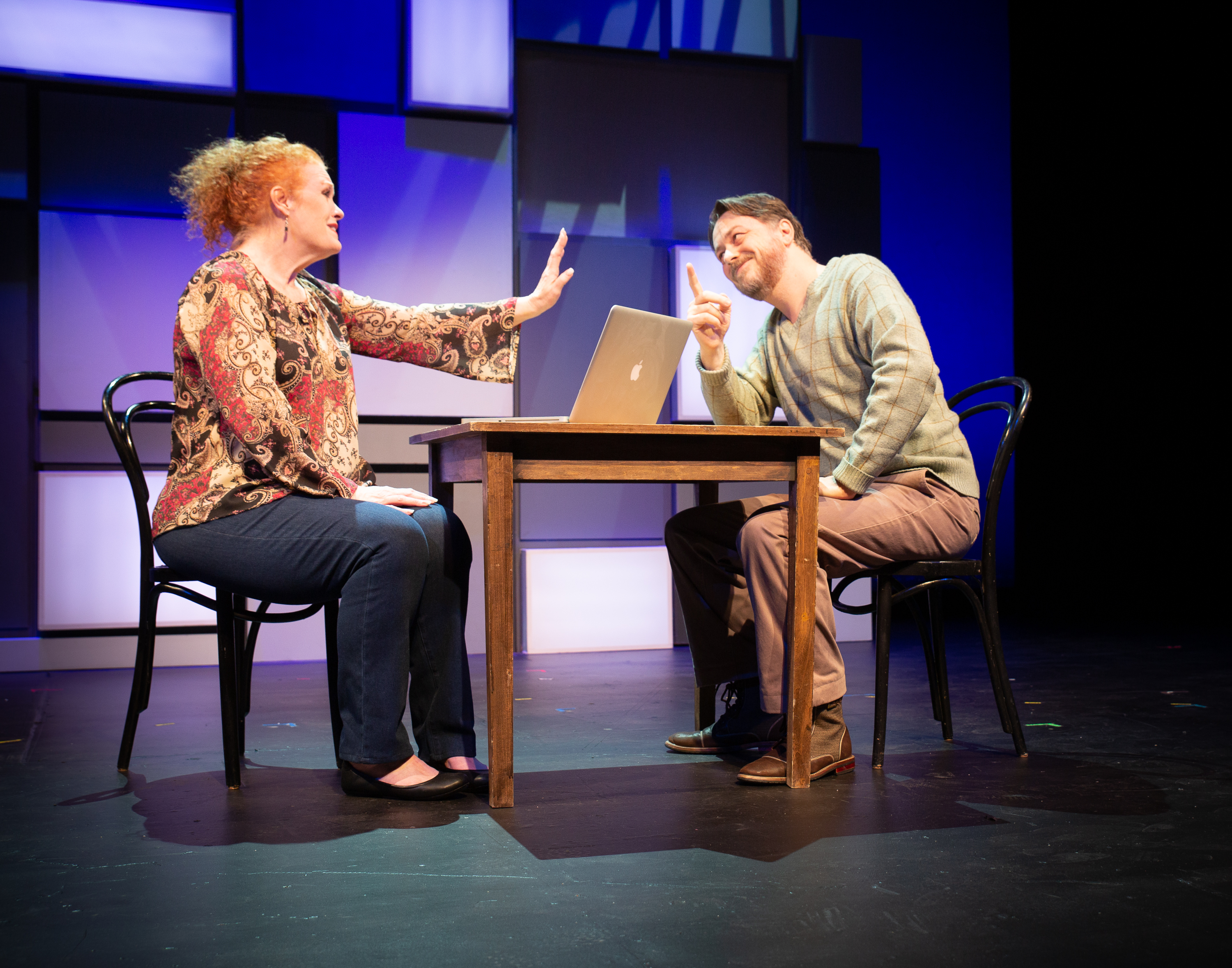 As the winter fades the Berkshires theatre season is beginning is off to a effervescent start with Barrington Stage Company’s eleventh edition of 10X10… ten short plays by ten different playwrights.

The show opens with the 10×10 players singing and dancing a charming welcome written by Matt Neely, one of the company of six talented performers. Aziza Gharib, Doug Harris, Kelsey Rainwater, Peggy Pharr Wilson, Robert Zukerman and Neely appear in multiple roles in what are mostly light-hearted plays that comment on human foibles.  Some of them have clever, unexpected twists; all of them are articulate and evoke much laughter.

Wilson and Zukerman, long-term veterans of the 10X10’s, appear in Laurie Allen’s “Stealing a Kiss” directed by BSC Artistic Director Julianne Boyd. She and Matthew Penn have directed all the plays.   As two widowed people, unknown to each other, wait at a bus stop, the gregarious Harvey is ignored by the somewhat suspicious Sue.  He sings, dances and jokes as he tries to break down her wall.  It is a charming play beautifully performed.

Glenn Alterman’s “Love Me, Love My Work” in which Jane (Wilson) and Ned (Neely) have, at first, a seemingly deceitful relationship.  She says that someone whom they both know is lying at the bottom of the bay and he is horrified.  What slowly evolves is an artful conceit that keeps the audience guessing.

“Honestly” by Stephen Korbar focuses on a young couple (Harris and Rainwater) who are trying to determine where their relationship is going.  The play starts of with a raft of laughter then moves on to a series of serious moments.  The cast and Penn  slowly draw us in as Bobby and Kaylene try to fathom their futures.

Wilson, Gharib and Rainwater appear in “Gown” by Robert Weibezahl.  This is a very touching play that could become maudlin but is sensitively directed, by Boyd, and acted with emotional restraint.

Penn has directed Ellen Abrams “Liars Anonymous” with his tongue planted firmly in his cheek.  Neely and Gharib are priceless as they try to outdo each other with possibly true stories about their personal lives.

A very pointed and topical piece is “The Voice of the People” by Cary Pepper.  Zukerman is a cable news reporter observing an election in a very small town.  He interviews various people as they exit the polling place.  The rest of the cast play the voters adopting different characters almost at a moment’s notice.  Though quite a funny romp it also hints at a greater and disturbing truth about the democratic process

The various set pieces… benches, tables, chairs, props, as coordinated by Joseph F. Martin, are reset quickly so that there is not a lot of dead time.  The production is performed in front of a huge wall made of several random geometric shapes whose colors change with each play as does a drop that covers the whole upstage area.  Lighting designer Lucas Pawleski subtly creates the ambience of each act.

Nicole Slaven’s costumes inform the characters and have obviously been constructed for instantaneous backstage changes as some of the actors are in successive pieces.  The sound design by Alexander Sovronsky sets the tone as each play opens;  however, very loud and raucous music is played as the audience enters and at intermission.  It is somewhat disconcerting.

The production, featuring wonderful acting and tight, effective directing, is a terrific welcome back to live theatre after a long winter and is a cure for cabin fever.  Get out of your home and enjoy yourselves.