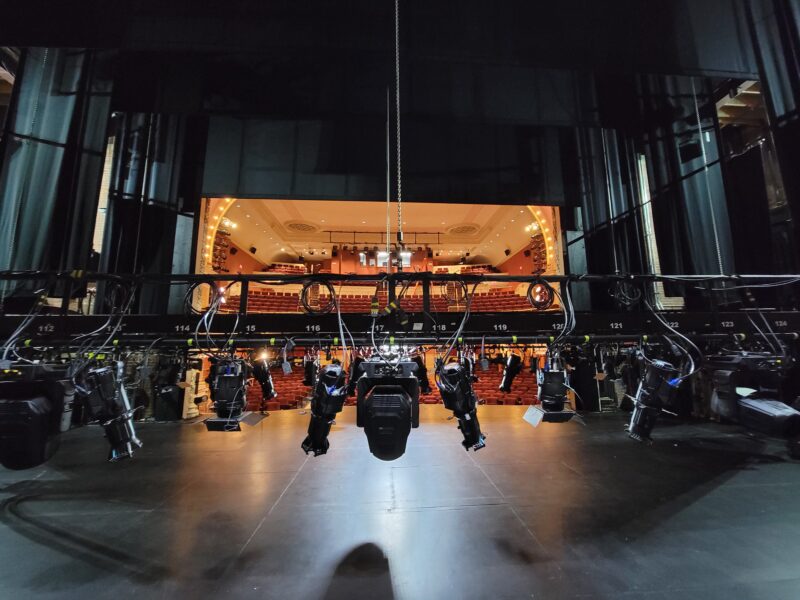 Great Barrington, Mass.—Three major infrastructure projects have a tangible impact at the Mahaiwe Performing Arts Center, the restored Southern Berkshire cultural hub originally built in 1905. Thanks to significant underwriting from foundation, business, and individual funders, every single light in the building is newly installed to the best standards in energy and tech; efforts towards updating speakers and amplifiers within Mahaiwe’s live sound reinforcement system are underway; and three key emergency exit doors have been rebuilt.

Every single light at the Mahaiwe has been replaced in a comprehensive overhaul conducted between December 2020 and November 2021.

“Any device that makes light in the building, whether it’s an architectural light, an office light, or a stage light, has been replaced,” says Mahaiwe Production Manager Lucas Pawelski. “From the marquee to the back wall of the theater.”

Before the project, lighting consisted of traditional tungsten, tungsten-halogen, and fluorescent units.

The Mahaiwe entered a partnership with Senior Energy Efficiency Consultant Walt Pazderski, himself a partner of National Grid through the third-party energy service company Energy Source.

After creating a plan with Pazderski, the Mahaiwe applied for and received $70,000 in products and installation services from National Grid, so that replacement of all architectural and auditorium lighting, save for the stage, was done at no cost to the Mahaiwe.

As this initial work wrapped up, Pawelski — in collaboration with Pazderski — proposed a model for new stage lighting, designed for energy saving, reliability, weight efficiency, and performer needs. Projected cost was $400,000; National Grid agreed to cover 85%. The difference was secured from The 1916 Foundation. “The Foundation was so impressed with National Grid’s generosity and leadership that they agreed to be a partner, making a grant in honor of the Mahaiwe’s late founder Lola Jaffe,” says Mahaiwe Director of Advancement Diane Wortis.

“We have reason to be proud of what this lighting system now allows us to do artistically,” says Pawelski. “There aren’t many theaters around the country, let alone locally, that boast such state-of-the art versatility.”

Pazderski adds, “The Mahaiwe is a majestic theater, with a rich tradition. It means a great deal to the local community as well as the broader region. In the spirit of Lola Jaffe, we are proud to partner with and support the dedicated and talented group committed to maintaining the majesty and fostering the tradition of the Mahaiwe.”

Reducing energy use and costs is a significant benefit of the lighting upgrades. Upgrading lighting instruments to LED contributes to energy efficiency and reduces the theater’s carbon footprint and energy bills. Each traditional stage lighting instrument was replaced with an LED equivalent that runs using roughly one-fifth the power required for the traditional stage lighting equivalent. In National Grid’s Energy Savings Plan for the Mahaiwe, the lighting upgrades are expected to result in approximately $22,656 in energy savings per year and reduce greenhouse gases annually by 173,056 pounds.

Another facility initiative is underway – replacing a key segment of amplifiers, speaker cabinets, and signal processing for live performances. These elements make up part of the theater’s live sound reinforcement system.

“The value of presenting organizations like ours is based upon four factors – the programs we have, the building we have, the audience we have, and the equipment we have,” says Pawelski. “By upgrading components within the sound system, we increase our value to presenting artists, renters, and audiences.”

The speakers and amplifiers currently in place have aged out over the course of more than 1,500 shows since the Mahaiwe Performing Arts Center’s first season in 2005, making them susceptible to failure and no longer reparable. The new components will not only improve reliability, but they will also improve audience experience by blending sound for less ringing and feedback and improving sound distribution across the theater.

Upgrading will also help offset costs when contracting artists with these technical needs, where external equipment has, in the past, had to be brought in.

Installation work by Klondike Sound is scheduled for April 2022. The new equipment is manufactured by L. Acoustics.

On-site fundraising at the Mahaiwe’s 2021 Gala secured $110,000 towards the $150,000 project cost, thanks to individual donors. The Mahaiwe’s Advancement department is exploring options to cover the difference. For more information visit mahaiwe.org/support.

Three emergency exit doors at the side of the auditorium have been completely replaced with new frames, doors, and hardware to uphold the preservation of this historic building. The project began with demolition of the old fixtures, which were rusting due to water seepage and insecure from failing hardware.  Funds were secured through the Town of Great Barrington Community Preservation Act, with a matching grant from the Jane & Jack Fitzpatrick Trust. Each party contributed $15,000. Fundraising began late in 2020 and construction was completed, after supply chain delays, in January 2022.