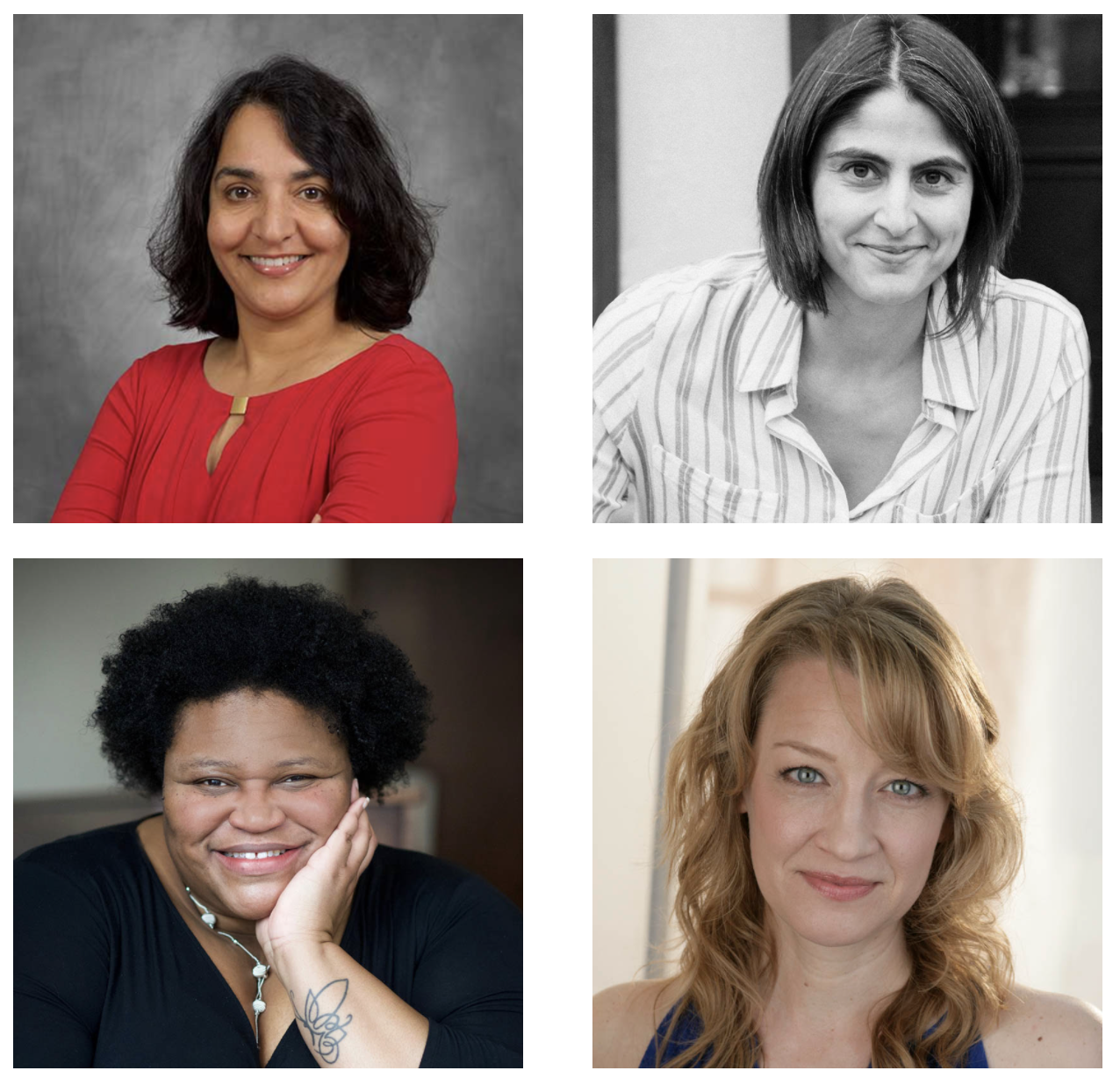 “We are overjoyed to add these four new members to our Board this year,” said Molly Merrihew, WAM Managing Director. “They each bring a unique perspective and expertise to WAM that will aid in our growth, especially  as we come out of the pandemic and return to a full season of offerings.”

Donna Haghighat currently serves as the Executive Director of the Women’s Fund of Western Massachusetts. Under her leadership, the Women’s Fund has successfully launched The Young Women’s Initiative for girls and young women of color in Springfield, focused on gender and racial equity and moved from direct programming to partnerships and community investing.

Megan Sandberg-Zakian is a theater director, author, and facilitator with a passion for the development of vital new American plays for the stage and the ear. She has directed several productions for WAM over the years, including the 2016 Fall Mainstage production of Holy Laughter, and the upcoming Fresh Takes Play Reading of The New Galileos by Amy Berryman. She has recently directed shows at the New York Theatre Workshop, the Huntington Theatre, and the California Shakespeare Theatre.

Kim Stauffer performed the role of Emilie in Emilie: La Marquise Du Chatelet Defends Her Life Tonight in WAM Theatre’s 2013 production and 2017 remount. Her additional Berkshire credits include Barrington Stage Company and Chester Theatre Company; and her regional work as an actor has taken her to New York Classical Theatre, Kansas City Repertory Theatre, the Shakespeare Theatre Company (DC), Actors’ Theatre of Louisville, and beyond. As a Director, she has had the privilege of working with Berkshire Playwright’s Lab, UAlbany Theatre, and Union College Theatre.  She is a passionate educator who serves as Head of Acting in the UAlbany Theatre Program.

Nicole M. Young-Martin is a writer, performer, producer, musician, nonprofit manager and educator with over 25 years of experience as a practicing artist and over 10 years of working in higher education and the nonprofit sector. Young-Martin serves as the producer and host of the web series, Black Writers Read, teaches literature, developmental writing, and theatre for Bard Microcollege Holyoke, and works as the Community Investments Manager for the Women’s Fund of Western Massachusetts.  Having attended WAM productions in the past, she is very excited to take on this new role with the WAMily.

WAM is also grateful for the recent service of Arwen Lowbridge (Financial Planner and Advisor at Baystate Financial), Diane Scott (Director of Artist Services at the Mid-America Arts Alliance) and Ellen Ring (retail specialist of 30 years) who recently completed their terms on the WAM Board. Their assistance and expertise was vital to WAM’s success and sustainability during the pandemic.

“We are honored to welcome these new board members to WAM in 2022,” said Wendy Healey, Board President. “As part of our Accountability plan, WAM’s Governance Committee was charged with actively transforming our traditional board structure to support WAM as an intersectional feminist and anti-racist theatre organization. We’re thrilled to add these artists and nonprofit leaders to our board as part of that effort, and we look forward to continuing to reimagine board roles with their participation.”

If you have expertise to share and are interested in speaking to WAM about volunteer opportunities including participation in a WAM Committee working alongside our team and board please contact WAM via email at info@wamtheatre.com.

WAM recently announced their  2022 Performance Season centering different versions of empowerment through four groundbreaking theatrical stories and a cabaret benefit performance that will take place in venues across the Berkshire region.  The season includes: The New Galileos by Amy Berryman, Bright Half Life by Tanya Barfield, a MisCast Cabaret, Escaped Alone by Caryl Churchill, and Cadillac Crew by Tori Sampson. For tickets and more information visit wamtheatre.com.

Donna Haghighat (she/her) came to the Women’s Fund with over 12 years of experience developing programs, cultivating relationships, launching startups, fundraising, directing communications strategy, creating strategic plans and building advocacy programs. Under her leadership, the Women’s Fund has successfully launched The Young Women’s Initiative for girls and young women of color in Springfield, focused on gender and racial equity and moved from direct programming to partnerships and community investing. This has allowed the Women’s Fund to focus on advocacy, research and fundraising. Prior to joining the Women’s Fund, Haghighat was Principal at Collabyrinth Collective, LLC. Previous roles have included Executive Director of the Aurora Women & Girl’s Foundation, Chief Engagement and Advocacy Officer for YWCA Hartford Region, a strategic consultant, Chief Development Officer for Hartford Public Library, Interim Director and Grants/Program Manager of the Women’s Education and Leadership Fund, and Co-President of AAUW CT. Haghighat was awarded the Trinity College Alumni Medal of Excellence in 2019, was the grand prize winner of the 2012 University of Hartford’s Barney School of Business International Business Plan Competition and was recognized as The Trinity Club of Hartford’s Person of the Year in 1999 and the Trinity College National Alumni Association Award in 1996.

Megan Sandberg-Zakian (she/her) is a theater director, author, and facilitator with a passion for the development of vital new American plays for the stage and the ear. Current Role with WAM: director (The New Galileos), Board Member. Previous WAM: Seven Homeless Mammoths Wander New England, Holy Laughter.  Favorite recent directing projects elsewhere include: Nat Turner in Jerusalem (New York Theatre Workshop), House of Joy (California Shakespeare Theatre), Skeleton Crew (Huntington Theatre Co), Mr. Parent (The Lyric Stage) and Audible Originals Rapture Season and Evil Eye (Audie Award for Best Original Work; Gracie Award for Original Online Programming). Writing: Her book, There Must Be Happy Endings: On a Theater of Optimism and Honesty is available from The 3rd Thing Press. Affiliations: Megan is the co-founder of creative leadership consultancy Humanstudio, an Associate at BIPOC-led executive search firm ALJP Consulting, and a co-founder of Maia Directors, supporting artists and organizations engaging with stories from the Middle East and beyond. Education: Megan is a graduate of Brown University and holds an MFA in Interdisciplinary Arts from Goddard College. She has taught classes and workshops at Brown University, Yale University, Harvard University, and Northeastern University. Awards/Memberships: She is a recipient of the Princess Grace Theater Award and the TCG Future Leaders fellowship, an alumna of the Lincoln Center Directors Lab, and a proud member of SDC, the union for professional stage directors and choreographers. Etc: Megan lives in Jamaica Plain, MA, with her wife Candice. Connect: megansz.com

Kim Stauffer (she/her) is an Actor, Director, Educator, and Communication Consultant.  Her first experience with WAM was as an actor in their production of Emilie: La Marquise Du Chatelet Defends Her Life Tonight.  Her life and artist path have continually found her at the intersection of Arts and Activism – working with WAM resonates.  As an actor her work has taken her to New York Classical Theatre, Barrington Stage Company, Kansas City Repertory Theatre, Chester Theatre, The Shakespeare Theatre Company (DC), Actors’ Theatre of Louisville, and beyond. She serves as Head of Acting in the University at Albany’s Theatre Program and is passionate about creating collaborative, educational spaces fueled by experiential and interdisciplinary learning. With UAlbany’s School of Social Welfare she co-founded the Simulation Project, bringing together student Actors and Social Workers for practice simulations.  As a practitioner of Listening and Presence, she is a Communication Consultant who uses acting techniques to teach skills in embodied communication and behavioral and cultural awareness to groups and individuals. She is a member of Actors Equity Association, the Association for Theatre in Higher Education, and the Association of Theatre Movement Educators. She graduated with BAs in Theatre and Social Work from Eastern Mennonite University (and finds deep joy combining the two!), and earned her MFA in Acting from the University of North Carolina-Greensboro. She lives in the woods on the side of a little mountain, and can usually be found upcycling “junk,” lake swimming, and gardening, which she practices as an act of Resistance. www.KimStauffer.com

Nicole M. Young Martin (she/her) is a writer, performer, producer, musician, nonprofit manager and educator with over 25 years of experience as a practicing artist and over 10 years of working in higher education and the nonprofit sector. Having attended WAM productions in the past, Nicole is very excited to take on this new role with the WAMily. Nicole serves as the producer and host of the web series, Black Writers Read, teaches literature, developmental writing, and theatre for Bard Microcollege Holyoke, and works as the Community Investments Manager for the Women’s Fund of Western Massachusetts.  She has received artist grants from various organizations including the Community Foundation of Western Massachusetts & Assets4Artists, Easthampton City Arts, and Northampton Open Media. Nicole is a second-year doctoral student in Higher Education Leadership and Organizational Studies at Bay Path University and has a Bachelor of Theatre Arts from the University of Michigan Ann Arbor, an MFA in Theatre Management from Wayne State University, and an MA in English from University of Massachusetts Amherst.  To learn more about Nicole, please visit www.nicolemyoung.com.

There was an issue retrieving stats. Please try again later.