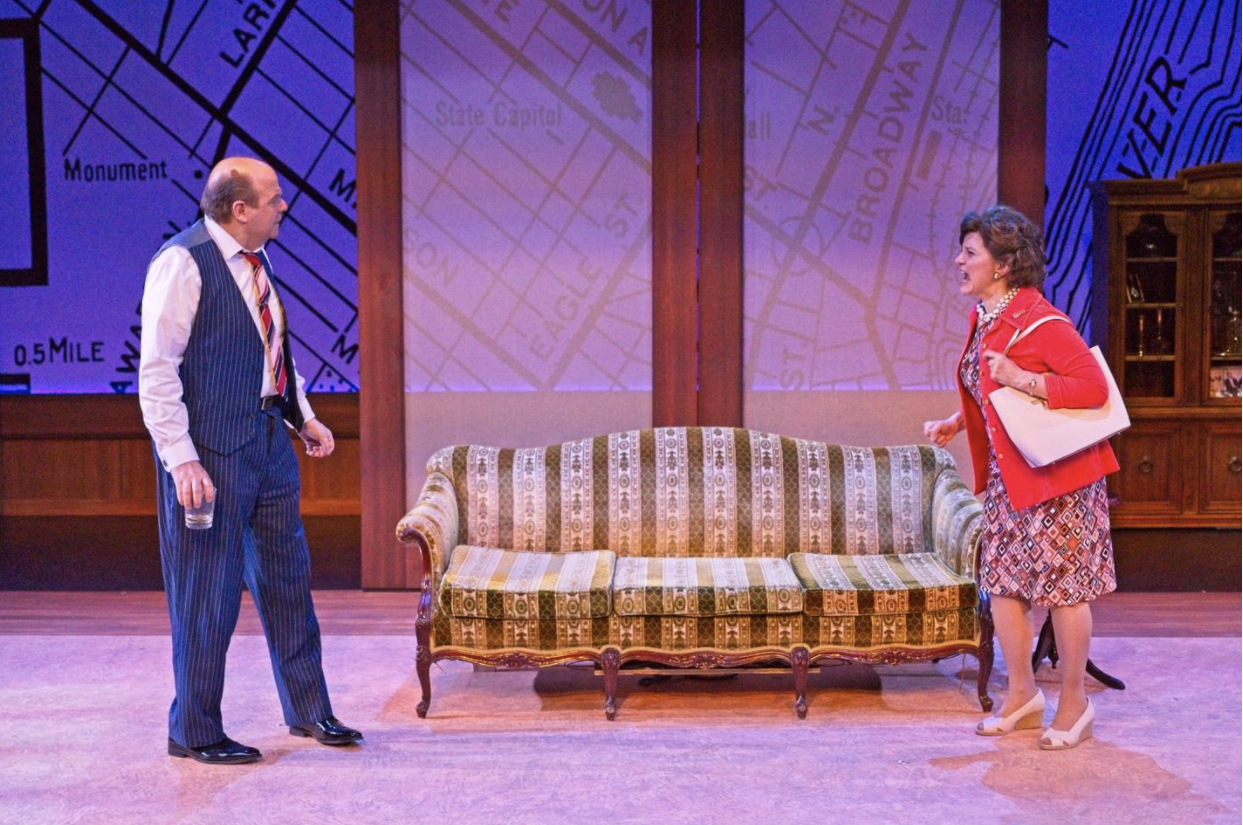 Erastus Corning 2nd (1909-1983), the 72nd mayor of the city of Albany, served a remarkably long term, from 1942 to 1983, earning himself the handle “Mayor for Life.” Scion of a prominent Albany family, Corning was the product of a classic political machine, where a political party–in this case, the Democrats–recruited its members via quid pro quo, offering incentives like money or political appointments.

In 1977, he faced his first real threat from within his party, when a younger, more vital senator challenged him in the Democratic primary. It is during this period that playwright Sharr White places The True.

Dorothea “Polly” Noonan (Antoinette LaVecchia), a former secretary to the mayor and longtime president of the Albany Democratic Women’s Club, had established herself as his closest advisor, and was widely rumored to be his lover. Corning (Michael Pemberton), plagued by political as well as personal rumors, realizes (or, more likely, has been instructed) that his public image is more important than ever to win the primary, and he must put an end to the perception of Noonan as his girlfriend.

It is the friction of Corning’s decision to extricate himself from Noonan, and Noonan’s fight to keep Corning in the mayor’s office, that drives this dynamic play. Pemberton’s fine, blustery performance creates a striking contrast to that of Wynn Harmon, who plays Polly’s loyal, graceful, sensitive husband, Peter. Harmon’s frustration and pain are palpable behind his good-natured facade. Corning spends much of his time at Polly and Peter’s home, where Polly stations herself at her sewing machine while Peter pours the booze.

LaVecchia’s Polly, a Madame Defarge who sews culottes (pants cut with legs wide enough to resemble a skirt, very popular in the 1970s, and a very clever symbol here), spews enough expletives to make David Mamet blush. This creates a striking contrast with her drab appearance (faithful to photos I’ve seen of the real-life Polly) and her colorful manner of expression, so much so that every m*****f****r and c***s****r is jolting.

My biggest problem with this trio is that there is so much shouting over each other that it is impossible to hear the dialogue. People do talk over each other in real life, and overtalk can be an effective device on the stage, but it happens so frequently in this production that it becomes predictable and irritating.

All of the actors do a splendid job with the material they’re given, but the unexpected highlight of the evening was Kevin McGuire’s Charlie Ryan, who doesn’t appear until the second act, and only in one key scene. His take on another nasty prong in the political machine was both hilarious and disturbing, and his presence gave the production some welcome energy.

Aside from my complaint about the excessive overtalking, I found Maggie Mancinelli-Cahill’s direction crisp and well paced. I do feel that the play is too long, but I think the problem is in the writing, which may be partly to blame for the blasted overtalking.

Roman Tatarowicz’s set is appealing. There is an enormous backdrop of a street map of downtown Albany. While it’s pleasing to the eye, it’s brightly lit throughout the play, and I found it distracting. I think it would be put to better use if it were only visible between set changes and acts. Aside from that, Devorah Kengmana’s lighting was skillful and well done. Howard Tsvi Kaplan’s costumes did a nice job of evoking the era.

Despite being set in the 1970s, The True is a relevant play; that it’s about Albany history is a bonus for those of us who live in the Capital Region. As Mancinelli-Cahill pointed out in her curtain speech on opening night, it’s not by chance that the title of the play is The True, and not The Truth. There’s a message here about being loyal, true to someone or some concept. The True is the fuel of political machines, even to politics today. To whom or what is your loyalty? It’s a question worth pondering.

The True runs at Capital Repertory Theatre until April 24, 2022. The play is about 120 minutes, with a 15-minute intermission.

Cast (in order of appearance)