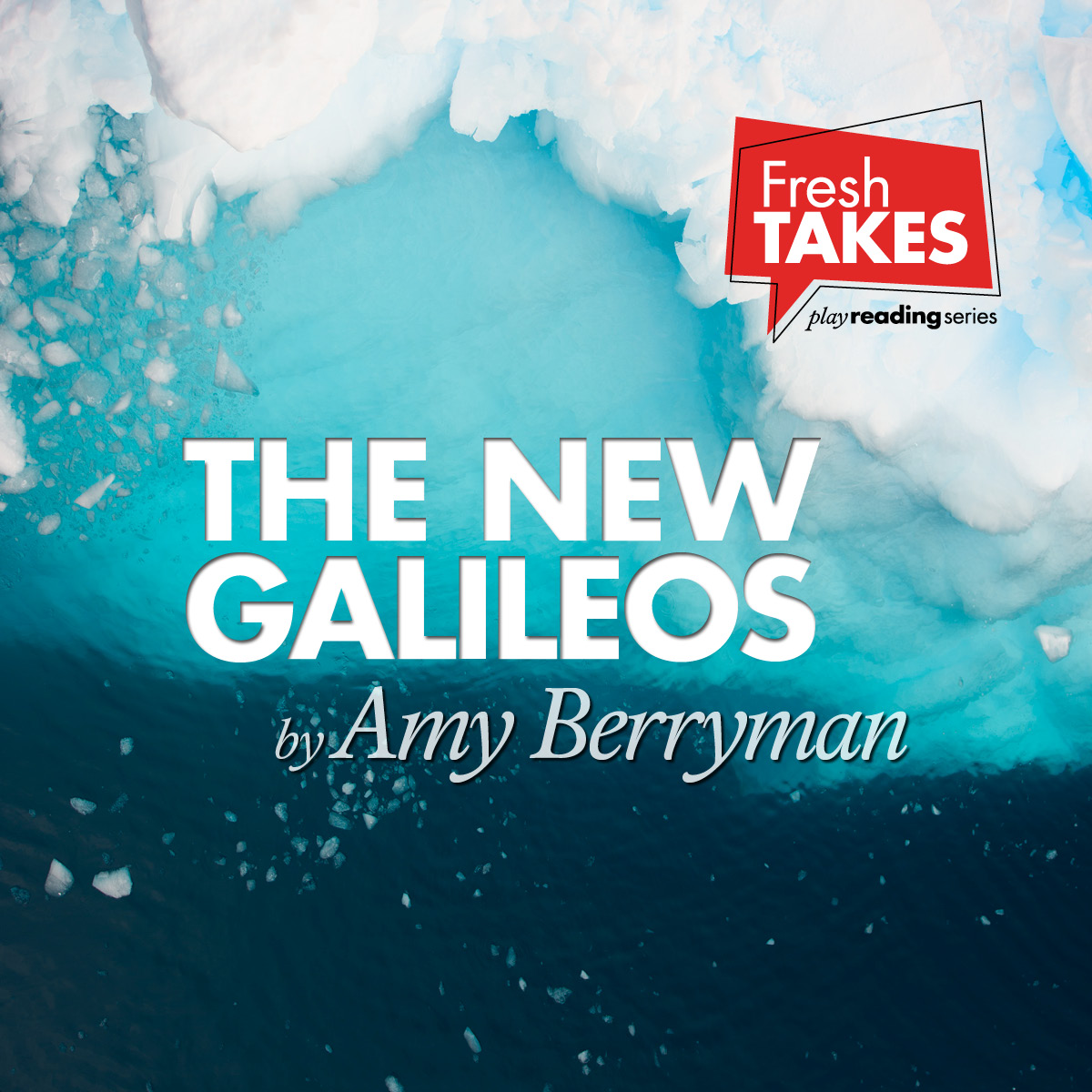 Performance on Sunday May 1

LENOX, MA (April 13, 2022) — WAM Theatre begins its 13th  season with a Fresh Takes Play Reading of  The New Galileos by Amy Berryman (Walden Theaterworks Hartford & London’s West End), directed by Megan Sandberg-Zakian (WAM’s Holy Laughter; Skeleton Crew at Huntington Theatre Co.) on Sunday, May 1, at 2pm at Berkshire Museum in Pittsfield and live streamed online. Tickets are on sale now.  This reading is being presented in partnership with the Berkshire Museum and Flying Cloud Institute’s Girls In Science Program.

In a future not too distant from our own, three female scientists—a marine biologist, a glaciologist, and a soil expert—are being held hostage by their government because of their work fighting climate change. As they are interrogated, the women face the ultimate question: what are they willing to sacrifice to defend the truth?  This edgy, gripping new play, by one of the country’s hottest playwrights, explores the interaction of science and capitalism.

“I’m thrilled to be returning to WAM, and especially to be digging into Amy Berryman’s vivid and gripping The New Galileos.” explains director Megan Sandberg-Zakian. “As the daughter of a molecular biologist mom, I am wildly moved and terrified by this brilliant intersection of a near-future authoritarian regime with the personal, professional, and ethical stakes that female scientists already face.”

Playwright Amy Berryman explained her motivation for writing this Science-Fiction play saying: “I wanted to explore the comparisons between Galileo and climate scientists of today whose work is often censored by the government.”

WAM Theatre is excited to be collaborating with two partner non-profit organizations in telling this story: Berkshire Museum, who will host the reading in connection with their current exhibit  “The Voyage to the Deep,” and Flying Cloud Institute, whose Young Women In Science Youth Mentors will be attending the performance.  “We are so excited about continuing our collaboration with WAM Theatre,” said Maria Rundle, Flying Cloud’s Executive Director. “These experiences that knit together creative expression, science exploration, and youth leadership create moments that change lives. We look forward to sharing this special moment with our next generation of scientists, artists, and engineers!”

The play features a stellar cast of diverse local professional performers: Nicole Orabona, a recent transplant to Pittsfield who works primarily in devised and interactive performance, will be playing marine biologist Nora Travers.  KD McTeigue, who was last seen in WAM’s digital production of ROE, will be playing various roles including the interrogator. Helen Matthews. Alika Hope, a singer and TV presenter (New England Perspective TV) who also appeared in Medea in Corinth off-Broadway, will be playing soil scientist Dr. Beth Whitney. The cast is rounded out with WAM’s Producing Artistic Director Kristen van Ginhoven making a return to the stage to play renowned glaciologist Elaine Tuck.

“When Talya called me to offer the opportunity to be part of this reading as an actor, I laughed out loud,” said van Ginhoven. “I was also secretly thrilled as this is a unique opportunity to wear a hat that I don’t wear much at WAM. So I’m a little nervous but mostly excited for the chance to collaborate in this way with such an incredible group of artists on this compelling story. See you on May 1 from the other side of the stage!”

Tickets are now on sale for THE NEW GALILEOS as well as our subsequent Fresh Takes Play Readings: BRIGHT HALF LIFE by Tanya Barfield directed by Gina Kaufmann at Mass MoCA on June 5 and ESCAPED ALONE by Caryl Churchill, directed by Kristen van Ginhoven at The Mount on August 7.  For more information or to reserve your tickets today, visit WAM online at wamtheatre.com or call 413.274.8122.

For tickets and more information about the 2022 Season and WAM Theatre’s programs, events, and artists, please visit www.WAMTheatre.com.

KD McTeigue as Helen Matthews & others.

For more information about the 2022 Season and WAM Theatre’s programs, events, and artists, please visit www.WAMTheatre.com.

Megan Sandberg-Zakian (she/her) is a theater director, author, and facilitator with a passion for the development of vital new American plays for the stage and the ear. Current Role with WAM: director (The New Galileos), Board Member. Previous WAM: Seven Homeless Mammoths Wander New England, Holy Laughter.  Favorite recent directing projects elsewhere include: Nat Turner in Jerusalem (New York Theatre Workshop), House of Joy (California Shakespeare Theatre), Skeleton Crew (Huntington Theatre Co), Mr. Parent (The Lyric Stage) and Audible Originals Rapture Season and Evil Eye (Audie Award for Best Original Work; Gracie Award for Original Online Programming). Writing: Her book, There Must Be Happy Endings: On a Theater of Optimism and Honesty is available from The 3rd Thing Press. Affiliations: Megan is the co-founder of creative leadership consultancy Humanstudio, an Associate at BIPOC-led executive search firm ALJP Consulting, and a co-founder of Maia Directors, supporting artists and organizations engaging with stories from the Middle East and beyond. Education: Megan is a graduate of Brown University and holds an MFA in Interdisciplinary Arts from Goddard College. She has taught classes and workshops at Brown University, Yale University, Harvard University, and Northeastern University. Awards/Memberships: She is a recipient of the Princess Grace Theater Award and the TCG Future Leaders fellowship, an alumna of the Lincoln Center Directors Lab, and a proud member of SDC, the union for professional stage directors and choreographers. Etc: Megan lives in Jamaica Plain, MA, with her wife Candice. Connect: megansz.com

Amy Berryman (she/her) is a writer and actor with roots in Washington State and West Texas. Current Role with WAM: playwright (The New Galileos) Playwriting: Amy’s play Walden recently premiered on the West End as a part of Sonia Friedman Productions’ RE:Emerge Season, directed by Ian Rickson, and received a production with Theaterworks Hartford directed by Mei Ann Teo (New York Times Critics Pick). Her other full-length plays include Three Year Summer, Epiphany, and The Whole of You. Her work has been developed at theatres all across the US and she has been a finalist for the O’Neill, NNPN’s National New Play Festival, and for Shakespeare’s New Contemporaries. Acting: Amy was seen off-Broadway in Jessica Dickey’s The Convent, directed by Daniel Talbott, as well as in Greg Kotis’ Lunchtime at the Brick, and Erin Courtney’s I Will Be Gone in the Humana Festival. Affiliations: Proud member of Rising Phoenix Rep. Upcoming: writer on the podcast VANTAGE with Gimlet and Composition 8. Connect: amy-berryman.com

Flying Cloud Institute’s mission is to inspire young people and educators through dynamic experiences with science and art that ignite creativity. FCI offers an array of programs in the arts and STEAM (Science, Technology, Engineering, Art, and Math) that serve over 2,000 youth and local educators annually. FCI offers classroom science and art residencies, after school Science Clubs and MakerSpaces, and vacation camps where youth step fully into their role as creators, makers, scientists, and artists. More information can be found at flyingcloudinstitute.org.

The Berkshire Museum combines art, science, and history to create thought-provoking experiences for visitors of all ages. The museum’s diverse collection of more than 40,000 objects is brought to life year round through exhibitions, educational programming, digital content, and community events. We truly are your community museum, offering access to education and culture to the residents of Pittsfield, the Berkshires, and beyond. More information can be found at: berkshiremuseum.org