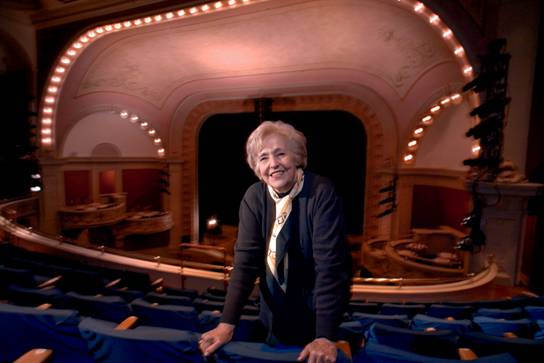 Great Barrington, Mass.—A celebration of the Mahaiwe Performing Art Center’s founder Lola Jaffe (1926 – 2021) will take place at the theater on Sunday, April 24 at 5 p.m. The celebration will include live performances by the Paul Taylor Dance Company and Deborah Grausman, as well as virtual tributes by Emanuel Ax and Pink Martini’s Thomas Lauderdale and China Forbes.

“Without Lola, there would not be this vibrant performing arts center anchoring Great Barrington today,” notes Executive Director Janis Martinson. “She foresaw the appetite for year-round programming, trusted that others would cherish the historic building as much as she did, and expected that high standards coupled with variety would win the day. And she was proven right on every count. Given Lola’s lifelong generosity to the communities in which she lived and her full-hearted dedication to the performing arts, it is fitting that this program, organized by her family and full of world-class performances, be open to all.”

Lola Jaffe was the Founding President of The Mahaiwe Performing Arts Center, Inc., where she headed the campaign to restore the 100-year-old Mahaiwe Theatre. Among her other cultural involvements, she was an Overseer Emeritus of the Boston Symphony Orchestra, the Vice President and Treasurer of The Jaffe Foundation; a member of the Board of Directors and Executive Committee at Jacob’s Pillow Dance Center in Becket, Mass.; Chair of the Board of Directors of the Berkshire Opera, Secretary of the Board of Directors of the American Friends of the Israel Philharmonic Orchestra, and a board member of the Board of Directors of the America-Israel Cultural Foundation. In addition, Lola was named 2006 Person of the Year by the Southern Berkshire Chamber of Commerce, the 2007 Citizen of the Year by the Great Barrington Rotary, in May of 2008 she received an Honorary Doctorate from the Massachusetts College of Liberal Arts (MCLA), the 2010 ISPA (International Society for the Performing Arts) Angel Award and the 2016 Berkshire Museum Berkshire Award. A special focus of Lola’s was the establishment of ALFEA (Anne Levinson Fund for Experiencing the Arts) a program, in which Lola participated with Berkshire high school students, to expose them to the fine arts and performing arts through trips to New York City during the school year. The program is supported by a fund established by Lola and her late husband Edwin at the Berkshire Taconic Community Foundation.

Paul Taylor Dance Company, Deborah Grausman, Emanuel Ax, and Pink Martini are all familiar favorites of the Mahaiwe stage. The dance company, which has appeared regularly at the theater since its reopening in 2005, will perform the piece “Company B.”

Attendance is free but registration is required at mahaiwe.org or 413-528-0100 during Box Office hours, Wednesday through Saturday at 12 p.m. to 4 p.m.