The LAVA Center Features “Most Dangerous Women,” Speaking and Singing for Peace 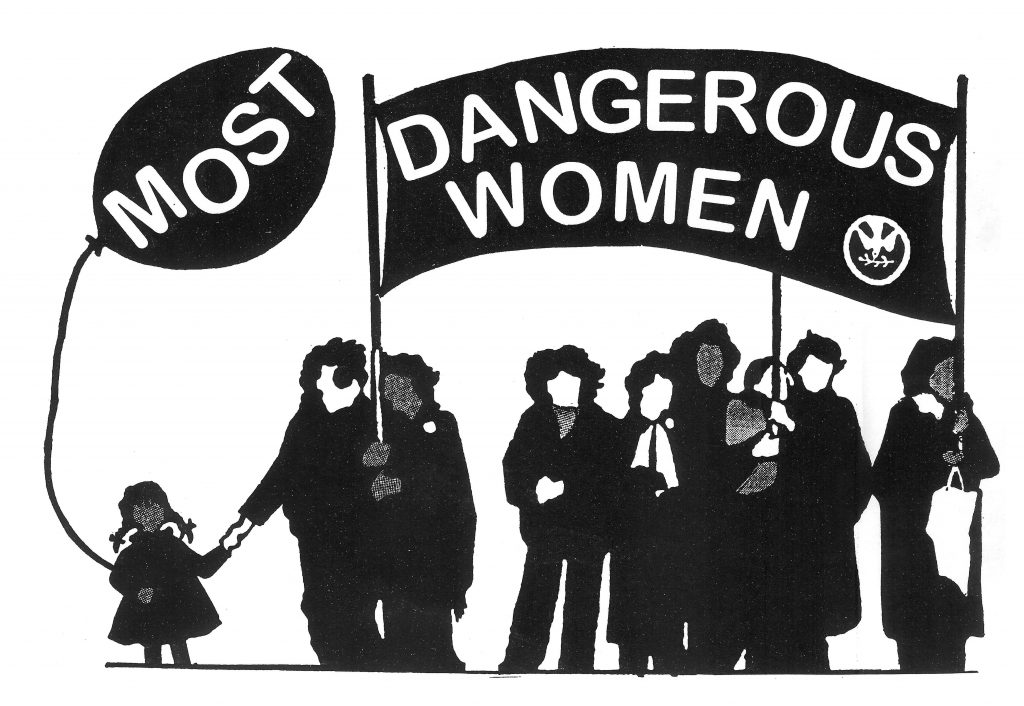 The LAVA Center Features “Most Dangerous Women,” Speaking and Singing for Peace

WHAT: Most Dangerous Women, written and directed by Jan Maher, part of LAVA’s Social Justice in the Arts and Media series

GREENFIELD, MA — The LAVA Center is proud to present Most Dangerous Women, written and directed by Jan Maher, as part of its Social Justice in the Arts and Media Series.

In the ninth month of the horrific First World War, a group of women from a dozen countries, determined to wage peace, gathered at The Hague and founded the world’s oldest continuous women’s peace organization. Most Dangerous Women tells the story of the founding of the Women’s International League for Peace and Freedom, and subsequent women’s activism for peace and social justice through over a century since, in a readers’ theater compilation of headlines, speech excerpts, stories, poems, and songs taken verbatim from the history makers featured in the play. From Jane Addams and Jeannette M. Rankin to Malala Yousafzai and Greta Thunberg, women of courage, conviction, and compassion have called the world to a higher standard than brute force and destruction as the way to solve disputes.

Historian Howard Zinn has said of the play, “An extraordinary assemblage of women speak about war and peace. They speak in clear and compelling language, often with song and poetry, and what they tell their audience both educates and inspires. Nobel Peace Laureate Jody Williams of Vermont comments, “If we want a more peaceful world, we have to teach people that such a world is possible and that it is both their right and their responsibility to take action to make it happen. This play contributes to those efforts and should be mandatory reading in our schools.”

Playwright Jan Maher notes, “Most Dangerous Women is a play that is never finished: as long as history keeps happening, it keeps being updated. Audiences can expect to hear about history being made right up to the date of the performances. The play brings the voices of so many who have worked for a better world to life through the reading and singing of the actors. Some of them are more typically known for other work, such as Jane Addams, founder of Hull House and called the mother of the profession of social work, but were ardent peace activists. Addams was the first American woman to be awarded the Nobel Peace Prize, a lesser known fact about her. Others are ordinary women who rose to the demands of history: women who resisted Naziism and Nazi occupation, for example, during World War II, and Leymah Gbowee who organized women across religious/ethnic divides in Liberia to stop a protracted civil war there. Still others victimized by the brutality of war and armed conflict survived to bear witness, such as Toyomi Hashimoto in Nagasaki and 11-year-old Zlata Filipovic in Bosnia. What they have in common is the conviction that war is not inevitable.

“Today, as wars increasingly threaten our existence as a species, not only directly but indirectly through the environmental degradation and loss of human dignity, ingenuity and community they cause, these women’s voices are needed more than ever.”

Maher is a co-director of The LAVA Center and a writer/director. She has created and/or directed many verbatim readers’ theater plays over the course of her career. Most recently she consulted on Every Moment of Every Day, Lindy Whiton’s play drawn verbatim from the stories of original mothers, and directed Christine Benvenuto’s play Bridges, drawn from compassionate listening sessions in Israel, the West Bank, and Gaza. Both plays have already been featured in The LAVA Center’s Social Justice in the Arts and Media series. “Plays based on the real words of real people have a particular power,” Maher says. “They capture the fact that the vast majority of humans who live in historic times have compelling but often overlooked points of view to share and important stories to tell that we can learn from.”

Most Dangerous Women is performed by Emily Gopen, Nina Gross, Kaia Jackson, Laura Josephs, Jean Koester, and Kirsten Levitt and directed by Jan Maher. Robby Moore stage manages, and Lucinda Kidder will facilitate post-performance discussion of the issues brought up by the play.

The play performances will be available both in-person and online. Reserve tickets for a donation of your choice ($5–$10 suggested; $1 minimum). Seating will be limited. Everyone who comes into The LAVA Center to see a presentation must show proof of Covid vaccination upon entry. Reservations can be made at https://thelavacenter.eventbrite.com.