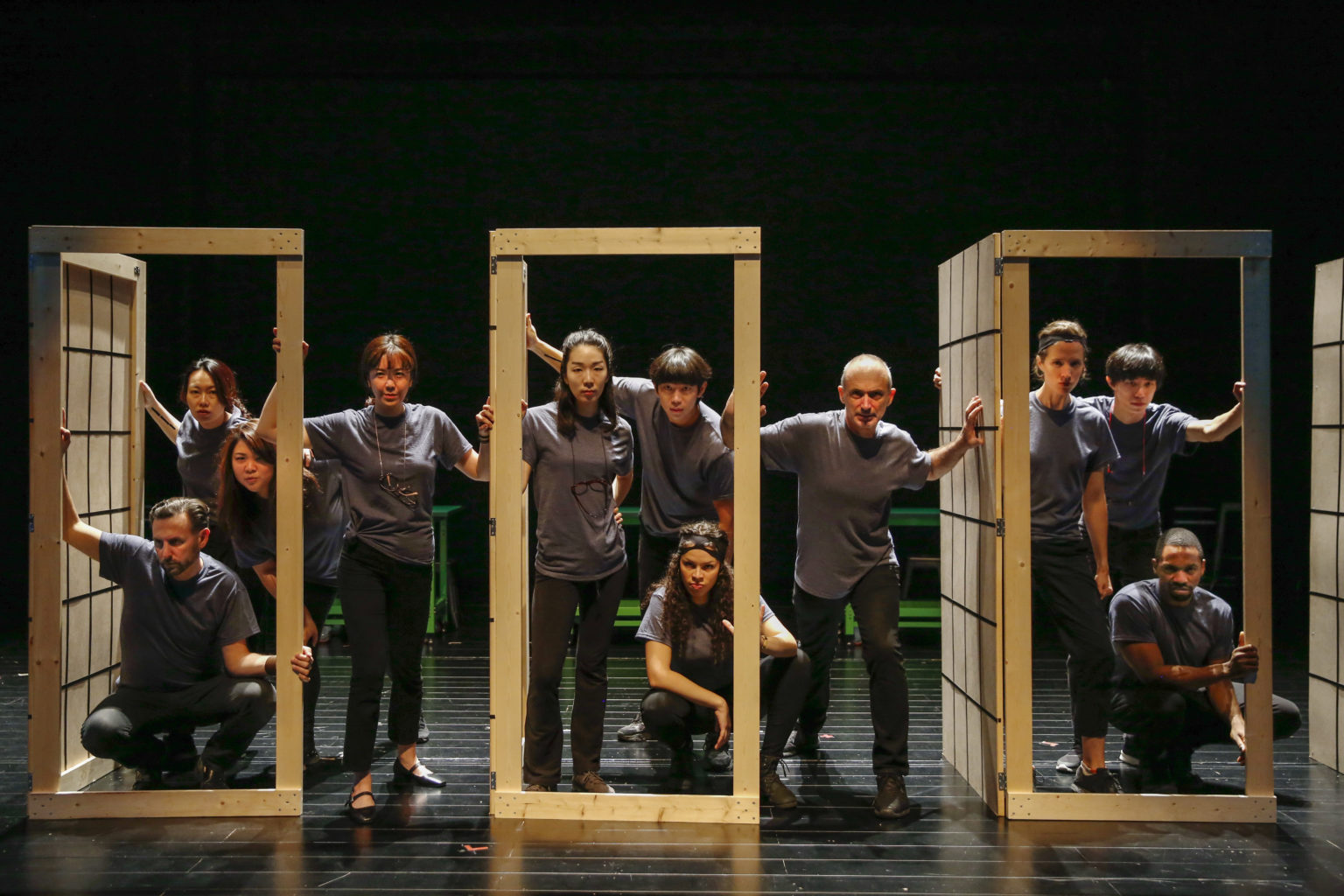 The Legend of the Waitress and the Robber
Concrete Temple Theatre, Playfactory Mabangzen, and Yellowbomb (Seoul, S. Korea)

In partnership with Korean Cultural Center NY, the groundbreaking creative collaboration between Concrete Temple Theatre, Seoul–based Playfactory Mabangzen, and Yellowbomb, will develop in residency and premiere at PS21.

“Imagine if you will, there’s a world much like ours. Maybe in the future. Or maybe even now. A world where every human lives separate and alone. The only interaction allowed – is on a phone.” These lyrics are from the opening song in The Legend of The Waitress & The Robber, written two years before Covid fundamentally changed the world and the ways we connect, and disconnect, with one another. Its playful, irreverent look at the isolation inherent in our complicated contemporary culture is made even more urgent now, after two years of pandemic separation.

Set in a dystopian society, The Legend of The Waitress & The Robber is a comic-book-style mash-up inspired by Friedrich Schiller’s play The Robbers and the Korean novel The Story of Hong Gildong, both Robin Hood-style stories of individuals betrayed by their families. With nods to Weill and Brecht, the characters sing and dance as they fight for what they believe, challenging the timeworn concepts of family and perceptions of ownership and justice.

The Waitress, fed up with watching her older customers be mistreated by their children, kidnaps these seniors so she can care for them. Meanwhile, the Second Son, accused by his brother of being a thief, becomes a robber who “liberates” people from their cellular devices. The Waitress & The Robber digs into technological isolation and aging with lighthearted humor, ultimately giving voice to people usually erased from society.

Concrete Temple Theater is a multi-disciplinary company, committed to the creation of compelling new theatrical works, incorporating drama, dance, puppetry, music, and the visual arts. Since 2004, Concrete Temple Theater has created devised visual theater that challenges the traditional relationship between design and text. Through touring original works and presenting workshops in NYC, nationally and internationally, they strive to bring myth and ritual back to the center of dialogue, by presenting works and workshops that address real issues within communities (grief, family relationships, environmental stewardship). They have presented their work for NYC audiences at venues like Ohio Theatre, HERE, and Barrow Street Theatre and have been artist-in-residence in NYC at The Flea Theater, Dixon Place, Mabou Mines, St. Ann’s Warehouse and Chashama. Concrete Temple has toured work nationally at venues like The Yard, Bard Summerscape, Detroit Institute of Arts, Pontine Theatre, Dairy Center for the Arts, Amphibian Stage Productions and internationally: London, Sri Lanka, India, Bulgaria, Turkey, Italy, Scotland, S. Korea and Costa Rica.

Playfactory Mabangzen (MBZ) was founded in 2005 by Playwright and Director Koh Sun-Woong. A seeker of magical realism, Koh is interested in writing about the strange realities and characters of the world. Playfactory Mabangzen’s aim is to find that which lies at the core of the piece, the essentiality, and recreate it. Currently, Playfactory Mabangzen actively works locally in South Korea and abroad. MBZ believes that “the value of pursuing a combination of illusions and fantasies in a realistic world” is the way in which plays can secure meaning in this age. Awards include: 2018: Gyeonggi Arts Performing Festa Best Collection 4, “The Tale of Rabbit,” 2017: Geochang Summer Festival of Theatre, Best Play, Best Actor (Lim Jin-gu),“Human Cannonball Show,” 2016: Gimcheon International Theater Festival for Family, Best Play, Best Director, Best Actor (Lim Jin-gu), “Human Cannonball Show” and SAC Awards, Best Play, Best Director, “Hong Do,” 2015:  E-daily Culture Awards, Best Play, “Hong Do” and Gyeonggi Arts Performing Festa Best Collection 3, “Hong Do,” 2012: The Korea Shakespeare Awards, Best Play, “Killbeth.”

Yellow Bomb Inc. is a multi-cultural company providing new artistic experiences where cultures collide. Based on Korean traditional music and musical theatre, the company has successfully organized, arranged, and planned many global events and performances. Operating both nationally and internationally, the company seeks to expand its business as a global event organizer.