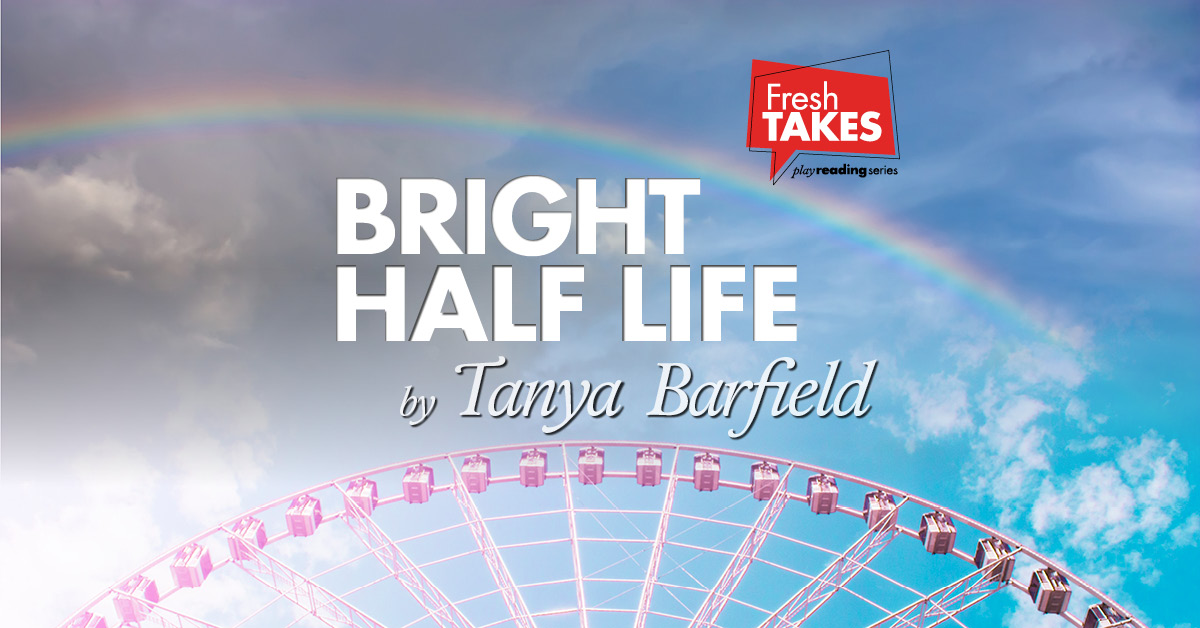 By popular demand, WAM Theatre’s Bright Half Life performance will be available as a digital stream (in addition to the live event). The digitally streamed performance goes live at 7:30pm EDT on Sunday, June 5, 2022.

Buy Tickets for Live or Streaming

LENOX, MA (May 11, 2022) — WAM Theatre joins the Berkshire Community in celebrating Pride Month with a Fresh Takes Play Reading of  Bright Half Life by Pulitzer Prize and Emmy Nominated writer Tanya Barfield (The Call, Blue Door). The play is directed by Gina Kaufmann (Professor of Performance and Directing at University of Massachusetts, Amherst) and will be presented on Sunday, June 5, at 2pm at MASS MoCA in North Adams. Tickets are on sale now.  This reading is being presented as part of Berkshire County’s annual LGBTQ+ Pride celebration in partnership with Berkshire Stonewall Community Coalition and MASS MoCA.

“I fell in love with Bright Half Life because it is about two women who feel real to me and who I can wholly root for,” explains director Gina Kaufmann. “The play asks whether love, even huge soulmate love, even love that includes family and kids, is enough to give our lives meaning.”

Bright Half Life is a kaleidoscopic play about love, heartbreak, skydiving, and the infinite moments that make a relationship. Hailed by The New Yorker as a “well-written portrayal of smart women finding, losing, and finding themselves and each other again,” Bright Half Life follows the deep and complicated love story of Vicky and Erica. Pause. Rewind. Fast forward. And hold on!

Helmed by Kaufmann (Tartuffe, the Musical at Shakespeare & Company), the play features two acclaimed performers making their WAM debuts: Erica will be played by Rachel F. Hirsch, an actor and co-founder of the Play Incubation Collective (PIC), where she recently developed and starred in Darcy Parker Bruce’s Piedmont Play Cycle. Kyle Boatwright, who will play Vicky, is a Pioneer Valley-based performer and director who works primarily in musical theater and is a long-time collaborator of director Gina Kaufmann.

Kyle Boatwright, who has played the role of Vicky before, spoke of her joy at inhabiting her again: “It’s such a gift to return to Vicky. So often Black actors need to focus on roles that carry a tremendous amount of Black trauma.”  Kyle explains that: “Vicky does carry the weight of being a Black female professional, but she’s also a well-rounded human with passions and relationship issues and aspirations and family problems. Barfield’s characters are the necessary future of BIPOC representation on stage: fully formed, with the appropriate level of focus on our social identities in addition to everything else that we are as individuals.”

WAM is excited to be collaborating with two new partner organizations in telling this story. MASS MoCA (Massachusetts Museum of Contemporary Arts), who will host the reading in their Club B10 space, and the Berkshire Stonewall Community Coalition, a non-profit organization supporting the well-being of LGBTQ+ people of the Berkshires.

“The board of the Berkshire Stonewall Community Coalition is thrilled to partner with WAM on their reading of Bright Half Life,” said Ashley Shade, Berkshire Stonewall’s President and a North Adams City Councilor. “WAM Theatre has been known to be extremely supportive of our community, and we look forward to presenting this play reading together as part of our Pride Weekend activities.”

Sue Killam, MASS MoCA’s Director of Performing Arts and Film, echoed this sentiment, stating, “We are excited to work with a new cultural colleague whose mission is to serve new work and emerging artists while addressing social justice topics, all of which align with our own mission. It’s always exciting to connect across the county as well!”

Tickets are now on sale for Bright Half Life, as well as our subsequent Fresh Takes Play Reading, Escaped Alone by Caryl Churchill, directed by Kristen van Ginhoven at The Mount on August 7.  For more information or to reserve your tickets today, visit WAM online at wamtheatre.com or call 413.274.8122.

For more information about the 2022 Season and ways you can participate with WAM Theatre, please visit wamtheatre.com.

Gina Kaufmann (she/her) is an Amherst, Massachusetts-based director and theater educator who revels in celebratory feminist work by and about women.  Current Role at WAM: director (Bright Half Life). Directing Elsewhere: She has worked as a director and acting coach in numerous regional venues, including The Williamstown Theatre Festival, Lake Tahoe Shakespeare Festival, Sacramento Theatre Company, and Shakespeare & Company.  In New York, she has directed for SoHo Rep, HOME for Contemporary Theatre and Art, Wings Theatre, and Dixon Place. Most recently, she directed The Beggar’s Opera Cabaret at Eastworks (her adaptation of The Beggar’s Opera for a three-woman cast) and Wild Thing for the 52nd Annual Siglo de Oro Festival in El Paso. For Silverthorne Theater, Gina directed Lauren Gunderson’s feminist comedy The Revolutionists in 2019 and Tanya Barfield’s Bright Half Life this past December. Affiliations: Gina is a member of the Stage Directors and Choreographers Society (SDC), Professor of Theater at the University of Massachusetts Amherst and co-director of the MFA Directing Program.  Connect: www.ginakaufmann.com

Tanya Barfield (she/her) is a playwright, screenwriter, and Juilliard faculty member whose works have been presented both nationally and internationally. Current Role with WAM: playwright (Bright Half Life). Plays: The Call (premiered at Playwrights Horizons in co-production with Primary Stages), Blue Door (nominated for a Pulitzer Prize and AUDELCO Award and was seen at numerous theaters around the country), Of Equal Measure (Center Theatre Group in Los Angeles and was nominated for an NAACP Image Award). Tanya’s short plays include: Medallion (Women’s Project/Antigone Project), Foul Play (Royal Court Theatre, Cultural Center Bank of Brazil), The Wolves and Wanting North (Guthrie Theatre Lab, published in: Best 10-Minute Plays of 2003). Tanya wrote the book for the Theatreworks/USA children’s musical Civil War: The First Black Regiment which toured public schools around the country. TV/Film: Tanya also writes for television (HBO, FX, Showtime) and shares Writers Guild of America Awards for her work on season four of FX’s The Americans and for the episode on Shirley Chisholm in Mrs America. Theater Awards: Barfield has been a recipient of a 2013 Lilly Award and the first inaugural Lilly Award Commission, a 2003 Helen Merrill Award for Emerging Playwrights, a 2005 Honorable Mention for the Kesselring Prize for Drama, a 2006 Lark Play Development/NYSCA grant, and she has twice been a Finalist for the Princess Grace Award. Affiliations: She is a proud alumna of New Dramatists and a member of The Dramatist Guild Council.

Kyle Boatwright (she/her) is an actor, musician, and writer based in the Pioneer Valley. Current Role at WAM: Vicky (Bright Half Life). WAM Theatre: debut. Selected Theatre Credits: The Revolutionists (Marianne), Significant Other (Vanessa), Boeing Boeing (Gloria), Seminar (Izzy), RENT (Mimi), A Year with Frog and Toad (Frog). Affiliations: Kyle is the co-founder of Rise Up Productions, an Amherst-based collective of performing artists that produces shows to support social justice organizations. She also works as a developmental editor and sensitivity reader for new musical and literary works, and is on the creative team of Legacy Boy: The Musical. Final Word: Kyle is thrilled to be returning to the role of Vicky in Bright Half Life, a past favorite.

Rachel F. Hirsch (she/her) is originally from Alabama, moved to Northampton by way of New York City, and is proud to now be a Pioneer Valley-based theater, music, and voice over artist. WAM Theatre: Rachel is proud to make her WAM debut as Erica in Bright Half Life. Selected Theater Credits Elsewhere: Soldier Poet (Chester and Silverthorne Theatre); Piedmont Plays Cycle (Play Incubation Collective); My Heart In a Suitcase (ArtsPower Touring Theater); Nutcracker! The Musical (Holson Productions); Love, Labor, Loss (National Yiddish Theatre Folksbiene); Footloose (Red Mountain Theatre Company) Additional Artistic Credits: Co-Founder and Co-Producer: Play Incubation Collective; Opera: Democracy, an American Comedy (Washington National Opera); Voice Over: Audiobook narrator for works by NYT Best Selling Authors, Other selected VO Credits- AT&T, PJ Library, Have I Got a Story for You Podcast; Teaching artist with Golden Bird and formerly with Spellbound Theater Company. Community Engagement/Activist work: Rachel is proud to be working toward creating a more equitable landscape for new play development and for all theater artists through her work with PIC. Membership/Affiliations: AEA, Sag-Aftra, Professional Audiobook Narrators Association  Selected training: BA in Music, George Washington University; Cap21. Final word: Thanks to Will, Aya, and Max for being the best support team in the world, and thank you to my new WAMily for inviting me to be a part of this beautiful play. Connect: rachelfhirsch.com, Facebook, IG, and Twitter @rachelfhirsch; playincubation.org, Facebook and IG @playincubationcollective

ABOUT THE BERKSHIRE STONEWALL COMMUNITY COALITION:

The Berkshire Stonewall Community Coalition exists to promote the wellbeing of all LGBTQ+ people in the Berkshires.  More information and a calendar of events can be found at berkshirestonewall.org

Through innovative collaborations, the Massachusetts Museum of Contemporary Arts (MASS MoCA) helps artists and their supporters create and show important new work, bringing to our visitors bold visual and performing art in all stages of production, while also creating a stimulating center of creativity and commerce that brings life and economic vibrancy to its hometown. More information can be found at massmoca.org