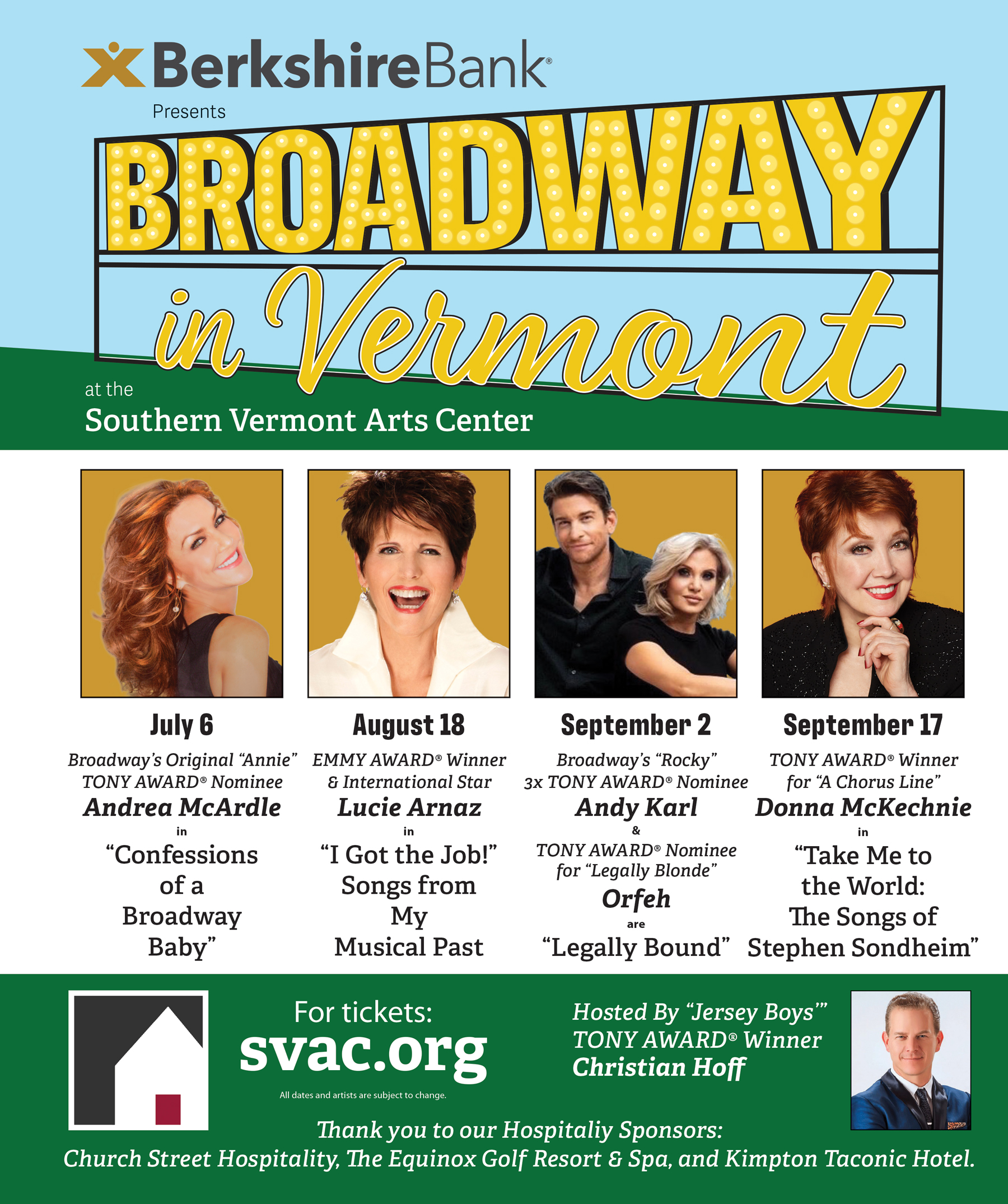 – EMMY AWARD® Winner and International Star, LUCIE ARNAZ in I GOT THE JOB! SONGS FROM MY MUSICAL PAST on Thursday, August 18, 2022.

– TONY AWARD®️ Winner for A Chorus Line, DONNA McKECHNIE in TAKE ME TO THE WORLD: THE SONGS OF STEPHEN SONDHEIM on Saturday, September 17, 2022.

“We are thrilled to bring Broadway’s best, live-in-concert to Southern Vermont with the help of our own resident TONY AWARD®️ Winner Christian Hoff and Old Mill Road Media, and we’re beyond grateful to our presenting sponsor, Berkshire Bank,” says Anne Corso, Executive Director, SVAC.

TONY AWARD®️ Winner Christian Hoff added, “As a newcomer to Vermont, I wanted to bring my Broadway pals and fellow talents to entertain us here in Southern Vermont. Special thanks to SVAC and our presenting sponsor, Berkshire Bank, and our hospitality sponsors, Church Street Hospitality, Equinox Golf Resort and Spa, and Kimpton Taconic Hotel for making this wonderful series possible.”

Andrea McArdle rocketed to stardom as Broadway’s original “Annie,” for which she was the youngest performer ever nominated for the TONY AWARD®️ for Best Actress in a Musical, winning both the Theatre World and Outer Critics’ Circle Awards for her performance. On Broadway, she originated the roles of Ashley in Starlight Express and Margy in State Fair, and she was seen as Belle in Beauty and the Beast and as Fantine in Les Miserables. On tour, she starred in Jerry’s Girls, The Wizard of Oz, and Peter Pan. Andrea has performed in concert halls from Carnegie Hall to the best showrooms in Las Vegas to the Metropolitan Opera House, as well as The White House. On PBS, she appeared in Andrea McArdle on Broadway and The Leading Ladies of Broadway. Get ready for a great evening of song with Andrea and musical director Steve Marzullo.

Celebrating a life on stage, EMMY AWARD® Winner Lucie Arnaz (Lucy & Desi: A Home Movie) returns to her theatre roots, looking back at some of the roles she has had on stages throughout the world. From her first role at 14 as “The Cheshire Cat” in Alice in Wonderland to a grandmother hanging upside down on a trapeze while singing about the preciousness of life in Pippin, Lucie and Musical Director Ron Abel offer audiences this brand-new concert, sharing stories and songs that Lucie has long been known for. With anecdotes and fond memories about her co-stars, directors, and musical collaborators, Lucie offers iconic songs and hidden treasures from some of Broadway’s greatest shows and a look at the backstage magic it takes to create them. A not-to-be missed evening of entertainment celebrating our great American Musical Theatre. luciearnaz.com

Together, Orfeh and Andy Karl have had an impressive run as one of Broadway’s greatest couples, both on and off the stage. She has a “powerhouse voice” (The New York Times). He is “a theater world heartthrob” (The New York Times). Although they met while doing the Broadway production of Saturday Night Fever, their irrepressible chemistry became the stuff of legend when they co-starred in Legally Blonde, which garnered Orfeh a TONY®️ nomination. Karl earned his own TONY®️ nods for Rocky, On the Twentieth Century, and Groundhog Day (for which he received an OLIVIER AWARD®️). After appearing in their 3rd Broadway show together, Pretty Woman, as Kit De Luca and Edward Lewis, this power couple is back again with their own show Legally Bound. The sexy, funny, and enormously talented duo tear through an eclectic mix of pop, R&B, and Broadway show tunes that are sure to excite and delight! Directed by Charles Randolph-Wright with music direction by the incomparable Steven Jamail. andykarl.com and orfeh.com

Donna McKechnie, who received a TONY AWARD®️ for her performance in the original company of A Chorus Line, is regarded internationally as one of Broadway’s foremost singing and dancing leading ladies. Donna has starred in and choreographed productions in London’s West End, along with theatrical productions in Tokyo and Paris. Some of Ms. McKechnie’s Broadway credits include How to Succeed in Business Without Really Trying; The Education of Hyman Kaplan; Sondheim, A Musical Tribute (which she also choreographed); Promises, Promises; Company; On the Town; State Fair (Fred Astaire Award); and The Visit. She has starred in and/or choreographed numerous regional plays and musicals, including Follies, Mack and Mabel, Gypsy, The Glass Menagerie, Sweet Charity, Six Dance Lessons in Six Weeks, Guys and Dolls, and can be seen in concert and with Symphony Orchestras as well as TV Specials and dramatic series including Fame, Cheers, and Dark Shadows. She was featured in the film Every Little Step and played the Rose in the film The Little Prince. Donna will be performing her new, one woman show, Take Me To The World – The Songs of Stephen Sondheim, which celebrates the greatest Broadway composer and lyricist of our time: Stephen Sondheim. In the show, she performs songs from A Funny Thing Happened on the Way to the Forum, Company, Follies, A Little Night Music, Anyone Can Whistle, and Sunday in the Park with George and shares stories of her time working with Sondheim and the great influence he had in her life, both professionally and personally. Ms. McKechnie’s memoir, Time Steps: My Musical Comedy Life, was published by Simon and Schuster. Donna was inducted into the American Theatre Hall of Fame in 2019. donnamckechnie.com

Berkshire Bank is transforming what it means to bank its neighbors socially, humanly, and digitally to empower the financial potential of people, families, and businesses in its communities as it pursues its vision of being the leading socially responsible omni-channel community bank in the markets it serves.

Berkshire provides business and consumer banking, mortgage, wealth management, and investment services. The Bank has approximately $12.1 billion in assets and operates 105 branch offices in New England and New York. Headquartered in Boston, Berkshire Hills Bancorp (NYSE:BHLB) is the parent of Berkshire Bank and is a member of the Bloomberg Gender-Equality Index. To learn more, call 800-773-5601 or follow us on Facebook, Twitter, Instagram, and LinkedIn.

The Southern Vermont Arts Center (SVAC) is a multidisciplinary arts organization in Manchester, VT, with a mission to promote and nurture the arts. SVAC strives to provide opportunities for local and regional artists, to introduce the wider community to artwork and performances of national relevance, and to engage diverse audiences. svac.org

Christian Hoff is a multi-talented entertainer and producer, known for his TONY®️-winning role in Jersey Boys and life-spanning career in the arts. He is the host of Jazz ‘n TÖST on WEQX, 102.7, sponsored by Vermont’s TÖST Beverages and produced by Old Mill Road Recording. christianhoff.com