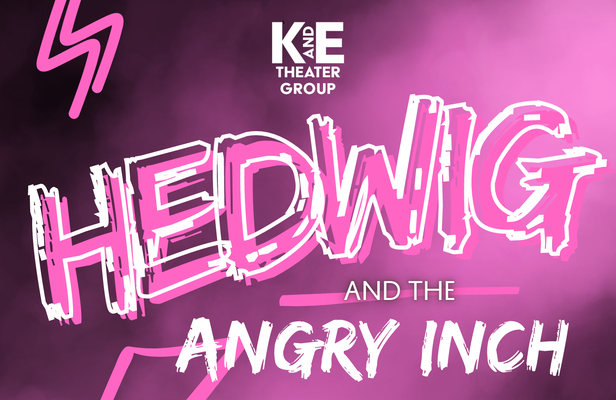 K and E Theater Group Presents “Hedwig and the Angry Inch” at Northampton Center for the Arts, June 23-25, 2022 for 5 Performances Only!

NORTHAMPTON, MA – COVID can try to tear her down, but Hedwig is going to give Northampton the whole Angry Inch! The Tony Award-winning glam rock musical Hedwig and the Angry Inch comes to Northampton Center for the Arts for 5 performances this summer, June 23-25, 2022. Marking its fourth full mainstage production of its Supersized Season Two, K and E Theater Group is also presenting this show as an inaugural production of their Coming out with Pride series, presented this June in an annual event, celebrating queer-forward stories.

Innovative, heartbreaking, and savagely funny, Hedwig and the Angry Inch is the landmark rock’n’roll musical with text by John Cameron Mitchell and music and lyrics by Stephen Trask that broke the mold and captured Broadway. This genre-bending, fourth-wall-smashing musical sensation, with a pulsing score and electrifying performances, tells the story of Hedwig Schmidt, an East German punk rock goddess whose botched sex change operation left her with just “an angry inch.” Now, she and her band are out to right many wrongs.

The K and E Theater production of Hedwig and the Angry Inch is directed and choreographed by K and E Theater Group President and Artistic Director Eddie Zitka, who has also directed and staged the company’s previous productions of Sweeney Todd, Songs for a New World, Assassins, Hello Again, Cabaret, and Altar Boyz. His performance credits include the first national tour of The Wedding Singer and numerous regional productions, including Ogunquit Playhouse’s Cinderella and All Shook Up, Thoroughly Modern Millie at Greater Boston Stage Company and Hoop Dee Doo Revue at Walt Disney World. Ken Comia serves as producer. The season’s supporting sponsor is INSIGHT Structures, Inc., based in Houston, Texas, and Heads Up Coaching and Consulting, based in Suffield, CT.

K and E Theater Group’s production of Hedwig and the Angry Inch features Eddie Zitka as Hedwig, Kelly Gagner as Yitzhak, and David Webber as The Angry Inch. The band is led by musical director Devi Badea, and features Justin Rodzen, Charlotte Ross, and Mitch Tilghman.

All performances are at Northampton Center for the Arts, located at 33 Hawley Street in Northampton, Massachusetts.

Proof of vaccination and face coverings that cover the nose and mouth will be required for entrance and while seated at the Northampton Center for the Arts.

Tickets and performance information for Hedwig and the Angry Inch are available at www.KETG.org.