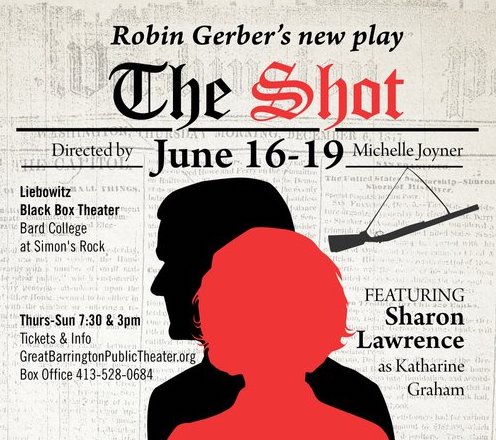 GB Public Theater punctuates the 2022 stage season with four new, solo performances that run for five weeks, themed to stories of humanity and the power of a single voice to tell them.

The third show opening in the series is the world premiere of Robin Gerber’s new play, The Shot (June 16-19), directed by Michelle Joyner and starring Emmy Award-winning actress Sharon Lawrence as Katharine Graham, whose journey from an isolated, abused young mother to powerful publisher of The Washington Post, brought down Richard Nixon’s White House. Her backstory takes audiences into the shadows of an abusive marriage that led to a stunning, life-altering trauma. Katharine’s struggle to discover herself leads her to become the woman who shook up Washington and became a model of determination and power.

Before her celebrity, Graham was consigned and resigned to the shadows of male dominion, expected to follow the patterns of quiet if not servile wifely domestication common to the time. Obedient to rules and standard roles, she married young and began a family, even stepping docilely aside when her father turned the family finances and publishing business over to her husband, although she had long aspired to be a writer and journalist. From there followed child-rearing, domestic abuse, a publicly, demeaning spousal affair, societal humiliation, a broken-down marriage and the eventual violent trauma that changed her forever. On her own, she resurrected herself, marshalling her mettle to return to writing and the iron will to take control of her life and the family company, and to strategize and assemble the publishing empire that made her name and changed the country.

The Shot is a work of fiction based on playwright Robin Gerber’s book, Katharine Graham: The Leadership Journey of An American Icon. The backstory exposes the scourge of intimate partner abuse and domestic violence, and deals with issues that still define our times–gender bias; financial power; guns in America; and power structures that subjugate women. Along the way, The Shot explores Katharine Graham’s distinct, winning character, inner conflicts, fear, and deep faith in love and duty. Her struggles to persevere and persist exemplifies survival and triumph against overwhelming odds.

In playwright Robin Gerber’s words, “The Shot is a story for this moment. The #metoo focus on harassment and abuse outside the home must look inside as well. The first refuge for sexism and misogyny is the treatment of women as objects for abuse in their domestic life. If we can be abused with impunity, we can be paid less, denied opportunity and control over our bodies.”

In choosing The Shot to show the power of a single human voice Jim Frangione, GB Public Artistic Director, explains, “The Shot is a personal story of a famed person who faces and conquers harrowing circumstance that too many women are forced and expected to face every day. She took on gender shaming, grappled with self-conflict and mastered self-discovery. It’s a story of human character that makes us all exceptional.”

After earning a degree in journalism from the UNC-Chapel Hill, Sharon went on become a prominently featured on stage and screen actor. Her television work includes her multiple EMMY nominated and SAG award-winning run on NYPD Blue, work in THE GAZE on YouTube earned a 5th Emmy nomination. Her series, JOE PICKETT, on Spectrum and Paramount+ is in its 2nd season of production and her Hallmark movies THE CHRISTMAS HOUSE 1 & 2 have both earned GLAAD nominations. Notable stints on hit shows such as  REBEL, QUEEN SUGAR, SHAMELESS, DYNASTY, ON BECOMING A GOD IN CENTRAL FLORIDA, DESPERATE HOUSEWIVES, RIZZOLI & ILES and GREY’S ANATOMY which earning her an EMMY nomination. Film work includes the indie hits MIDDLE OF NOWHERE from Ava DuVernay and THE LOST HUSBAND, both on Netflix.  Sharon spent 10 years on Broadway in Cabaret, Fiddler on the  Roof and as Velma in Chicago and since in LA at The Mark Taper Forum, in Poor Behavior and The Mystery Of Love and Sex,  the cabaret, Love, Noel, at the Wallis Annenberg Center for the Performing Arts, in several roles at the Geffen Playhouse and at the Pasadena Playhouse in A Song At Twilight, A Kid Like Jake and Orson’s Shadow, for which she was nominated for an Ovation Award and won the LA Drama Critics Circle Award.

She has been part of THE SHOT’s creative team since it’s first reading at Ojai Playwright’s Conference in 2017. Non-profit service plays a major role in Sharon’s life as former Chair of  the Women in Film Foundation, current Chair the BoD of Heal The Bay and as a Trustee of the Screen Actors Guild Foundation.

Michelle has had a career as a successful hyphenate for over 30 years in New York, Los Angeles, and more recently, the Berkshires. As an actor she enjoys a prolific career in television and film including numerous series regular roles, guest stars, has dozens of commercials and feature films. She is probably best remembered by those with vertigo as the girl who fell from Sylvester Stallone’s grasp in CLIFFHANGER.

Theater credits include originating the lead in LIFE SENTENCES by Richard Nelson at Second Stage NY, ANNAPURNA at The Chester Theater in the Berkshires, 8: THE PLAY at The Public Theater, ROMEO AND JULIET at Indiana Rep, opposite Michael Cerveris and Viggo Mortensen, as well as many Los Angeles productions. Since returning to western Mass, Michelle has worked at PS21 performing an original piece in SHE/HER last season which she will be taking to Edinburgh this summer. She is also a member of Shakespeare and Co and there was recently in THE APPROACH. Michelle has written, directed and performed in many plays at Berkshire Playwrights Lab and is a member of Berkshire Voices.

As a screenwriter, Michelle has written 10 studio films for FOX SEARCHLIGHT, WORKING TITLE, UNIVERSAL, MIRAMAX, and HBO FILMS. She has done film adaptations from books by best-selling authors Jane Smiley, DH Lawrence, Katherine Harrison, Richard Bausch and many others. She wrote and performed the short play ASKING FOR A FRIEND for Berkshire Playwrights Lab, and recently completed her first full-length play IODINE.

As a director, Michelle has helmed plays with Shakespeare and Co, most recently THE WAVERLY GALLERY; Santa Monica Rep; Greenlight Productions; The Edinburgh Fringe Festival; Ojai Playwrights Conference and others. She directed the short film SWEET NOTHINGS and a filmed version of THE SHOT. She will direct THE SHOT in the United Solo Festival in New York City in the fall, with Sharon Lawrence.

She is also a spoken word performer and a repeat performer on THE MOTH and other story salons on the west coast. She is a professional acting coach and dramaturg, and leads THE LONG TABLE, a women’s writing group.

The Shot, Robin’s first play, was selected for the 2017 Ojai Playwrights Conference. After a well-spent youth involving drugs, sex and feminist activism, Robin took the next logical step and became a Washington, D.C. lawyer. She worked on Capitol Hill for a legendary leader of the House of Representatives, before leaving to be a union lobbyist during the Clinton years. Robin’s post-politics writing life includes: The bestselling advice book, Leadership the Eleanor Roosevelt Way (Penguin), Katharine Graham (Penguin), Barbie and Ruth, about the founder of Mattel (HarperCollins), and the novel Eleanor vs. Ike, which imagines Eleanor Roosevelt running for President in 1952 (HarperAvon). Robin has toured the professional speaking circuit, motivating audiences at many Fortune 500 companies with stories from the lives of great women leaders. She has also appeared as a guest historian for the Biography and History channels and as a featured historian on the CNN/HBO documentary series First Ladies speaking about Eleanor Roosevelt. robingerber.com