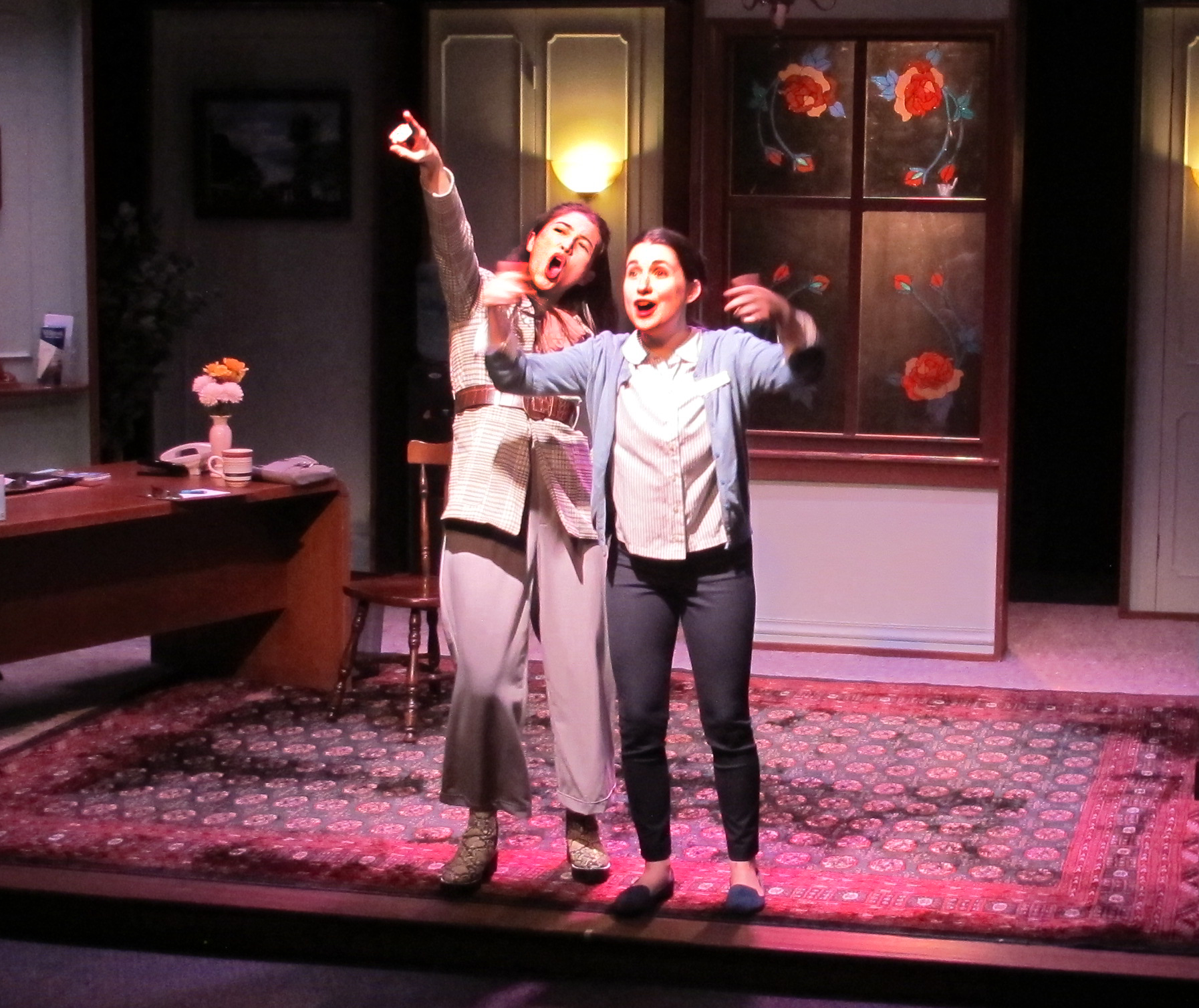 The entire Fitchwoods clan of fourteen people from Blissfield, Indiana, has been wiped out by a massive explosion.  An estranged member of the family has responded to a phone call to return and to participate in the funerals.  This is the initial premise of “Fourteen Funerals” by Eric Pfeffinger that is receiving a comic and provocative production at Bridge Street Theatre in Catskill, New York.

Sienna (Haley Wong) has come to the small Indiana town at the request of Millie (Montana Lampert Hoover) the receptionist at Blissfield’s Martin Mortuary.  Siena knows no one from her recently discovered extended family, yet Millie, representing her father who is the owner of the mortuary, expects her to deliver a eulogy for each of the victims.  Despite their first argumentative meeting the two women discover a commonality in their lives despite the fact that Sienna was raised and lives in Chicago and Millie has never left her small town of six thousand people.  What follows is a humorous and compassionate series of conversations and eulogies laced with witticisms and humanity.

In this beautifully textured script the playwright addresses several contentious subjects including racial prejudice in that Ms. Wong, who is Chinese, actually portrays a Chinese woman.   The disparity of big city and small town life styles is  bandied back and forth with each on the receiving end support and criticism.  Both women are in search of their personal lives and identities which creates disputations between them as well as respect and love.

The actresses bounce beautifully off one another.  Their conversations and reactions  evoke real life.  Even the humorous lines come out realistically.  The one caveat is that occasionally Ms.Wong’s articulation is compromised due to either a too rapid delivery of lines or swallowed words.  Still, the performances are deeply emotional and touching.

The direction by Sara Lampert Hoover is brisk justifiably except for the several scenes to which she brings a poignant considerate and gentle tone.  Her staging is fluid especially as the play moves into the various eulogies.  John Sowle’s set has the feel of a conservative, small town mortuary reception area.  His lighting design is simple including the effective transitions into the tributes.  Though the story takes place over two weeks, costume designer Alexis Costa has created fittingly characteristic clothing but has not employed costume changes that would slow the pace of the production.

There are many comic moments in the play, but the core is in the humanity of the eulogies, their insights into human nature, and the personal journeys of Sienna and Milllie.