REVIEW: “An Iliad” at Shakespeare & Company 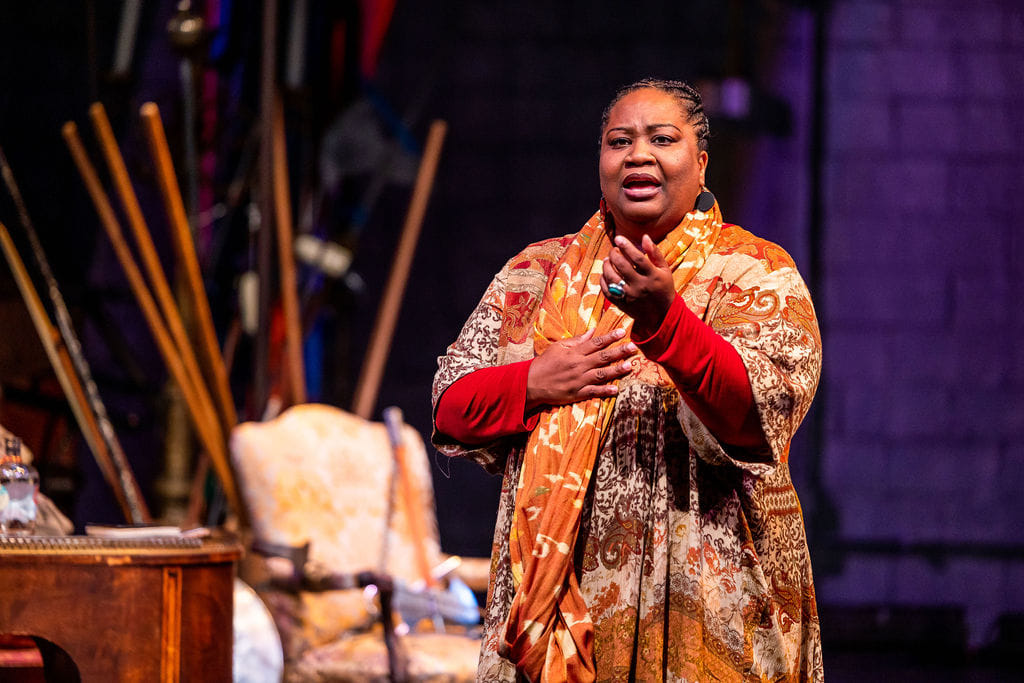 REVIEW: “An Iliad” at Shakespeare & Company

MaConnia Chesser is delivering a riveting performance in Shakespeare and Company’s one-woman play An Iliad by Lisa Peterson and Denis O’Hare.  It was previously performed by Chesser at the Ancram Opera House where the director of this production, Jeffrey Mousseau, originally staged it and is that company’s co-director.

The Poet (Chesser) tells us the story of Homer’s The Iliad with contemporary references that are relevant to the plot of the Greek classic, written circa 8th century B.C.  The actress’s power as she relates the story kept the audience, including a busload of students, absolutely enthralled.  There are gentle moments amidst the descriptions of battles, bloodletting and profoundly human emotions.  She slides from one scene to another effortlessly as she touches our contrasting emotions.

But it is her storytelling prowess that captures us.  Her voice is a powerful instrument as she transitions  from simple narrations to graphic descriptions of confrontations and intimacies.  She brings life to several characters including Achilles, Agamemnon, Hector, Priam, Andromache, Patroclus and others by modifying the timbre and phrasing of their voices.  Her physical being also changes moment to moment.  The refernce to modern elements, i.e. cars, is given the same import as Homer’s ancient words.  The word “rage” permeates the script as motivation for the Trojan war, not only as a shared human experience but as to what we should feel about war.  She also interacts with members of the audience.  We get the feeling that she is talking to us, not at us, because we are important to her and it is vital that we understand her.

Peterson and O’Hare have given us an anti-war play, very fitting for today.  Early in the play The Poet ruminates about the young men from a list of American city after American city who have been called to fight for our country.  This brings the pain of war home to us.  A memorable and poignant moment comes near the end of the play when she recites the litany of wars that have plagued civilization for 3000 years culminating with Ukraine. In this speech you can feel her anguish.  She delivers these lists in a somber recitation.  All of this is intended to bring centuries of bloody hostilities to the fore.

The program describes the set as “Here, a theater.”  Designed by Sarah Edkins the stage is open to the theatre’s black-painted back wall.  It is populated by myriad pieces of furniture… chairs, tables, a ladder, a step unit, and clothes and props, some of which are used as weapons at one point or another, including her costume designed by Govane Lohbauer.

The sound designed by Alexander Sovronsky complements the flavor of each moment, yet it is unobtrusive.  The music is painful or tender when warranted adding to The Poet’s insightful and dramatic storytelling.  James McNamara’s lighting subtly enhances the tone of the stage pictures as Chesser unfolds the ugliness and the beauty of the tale.  Whereas technical elements are often used to serve as background features, these designs are intrinsic to the power of the drama.

Mousseau’s direction is precise.  There’s not a wasted moment.  Given that the actress has the entire stage at their disposal, he always uses the space and the props to dramatize the story.  Though the play runs for approximately 110 minutes, the pace of the production is swift without any lagging moments.

This is a production strengthened by Chesser’s tour de force performance.to be relished and to cause us to reflect about the world we all live in