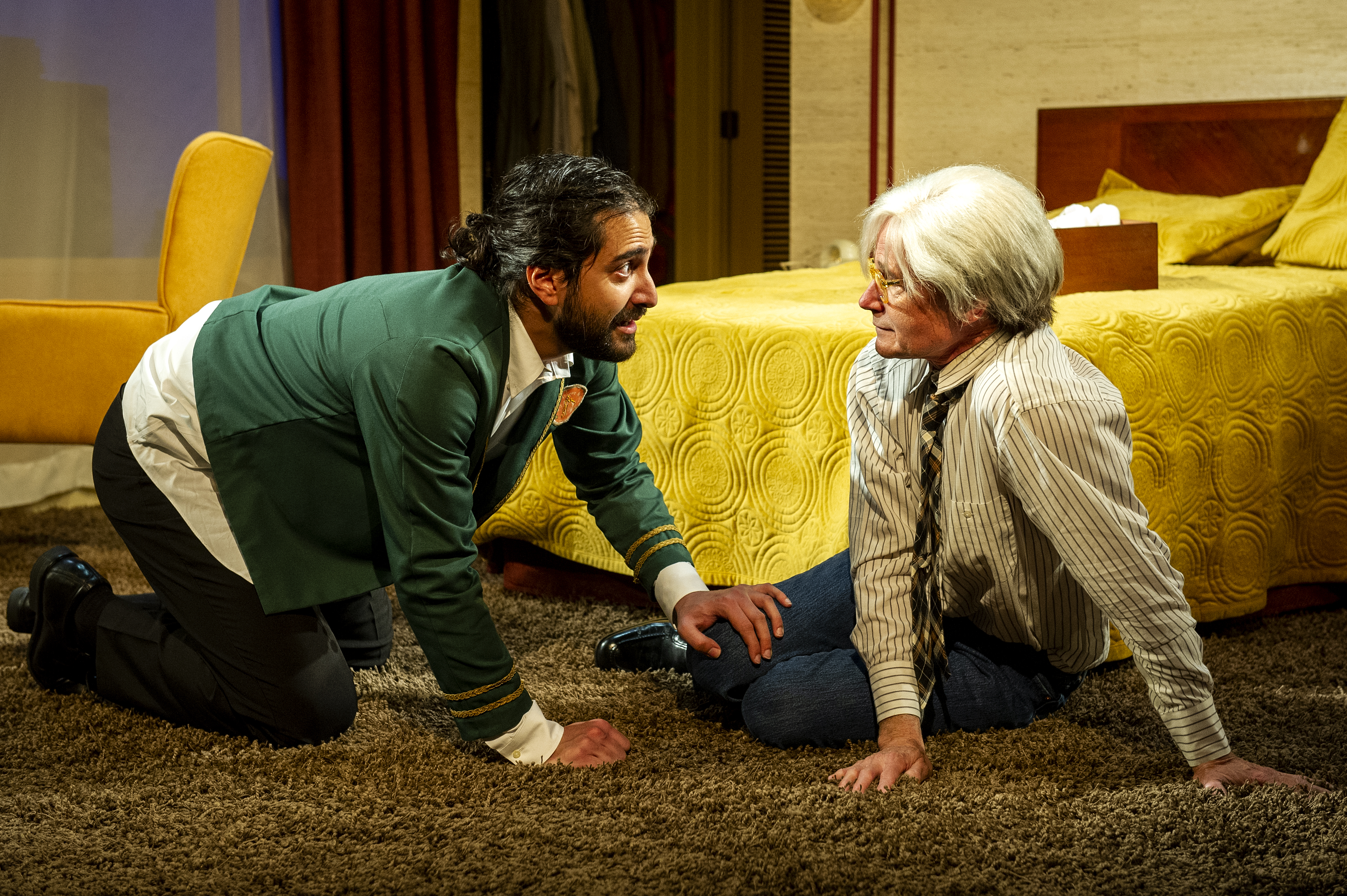 In 1976, Andy Warhol was invited to a White House state dinner in honor of the Shah of Iran. Warhol chatted briefly with the Shah’s wife, Empress Farah Pahlavi, and soon after, he was invited to Tehran to create a portrait of her.

Warhol was joined on the trip by Bob Colacello, a longtime Vanity Fair contributor who was also Warhol’s biographer. Warhol and Colacello were widely criticized for consorting with the violent regime.

I will say unreservedly that every element of this production is synchronized to create what is, for me, an ideal evening of theater. Askari’s script presents a pulse-quickening confrontation between two people who’d appear to be diametrically opposed. Warhol, a pop artist and celebrity portrait painter, is fully embodied by Stram in a finely shaded performance that might have easily become a caricature in lesser hands. Warhol was, after all, remembered for his unique appearance, for his fascination with celebrity, for the devotees with whom he surrounded himself. Stram guides us in understanding that Warhol was also a sensitive, damaged, solitary man.

As the radical Farhad, Rakhshanifar is terrifying and, ultimately, vulnerable. He enters Warhol’s hotel room posing as a bellman delivering caviar, abruptly revealing his intention to kidnap Warhol with the help of a group of fellow radicals who plan to meet them in a car outside. His desperation is as palpable as Warhol’s panic.

Skip Geer’s direction propels the action unerringly, and within all this turmoil, elegantly reveals the common humanity within these two paradoxical men. The visual elements of the play deftly enhance the action, from the physical contrasts of the two men (Warhol, ghostly pale, white-wigged, and delicate; Ahmal, swarthy, solid, and imposing) to the changing, slyly repetitious projections of Warhol paintings, ingeniously designed by Yana Biryukova. Brian Prather’s handsome set, with its 1970s conception of elegance, is marvelous (although the constraints of the small stage perhaps inhibited what I would imagine would be a large and luxurious suite). Joyce Liao’s lighting and Dan Roach’s sound design were innovative and augmented the action superbly, and Nicole Wee’s costumes were utterly authentic.

This world premiere runs through June 25th. While I’m one of those people who feel that the standing ovation has become too commonplace and has lost its significance, I felt the extended standing ovation this play received on opening night was well deserved. Kudos to this exceptional company.