REVIEW: Harper Lee’s “To Kill a Mockingbird” at Proctors 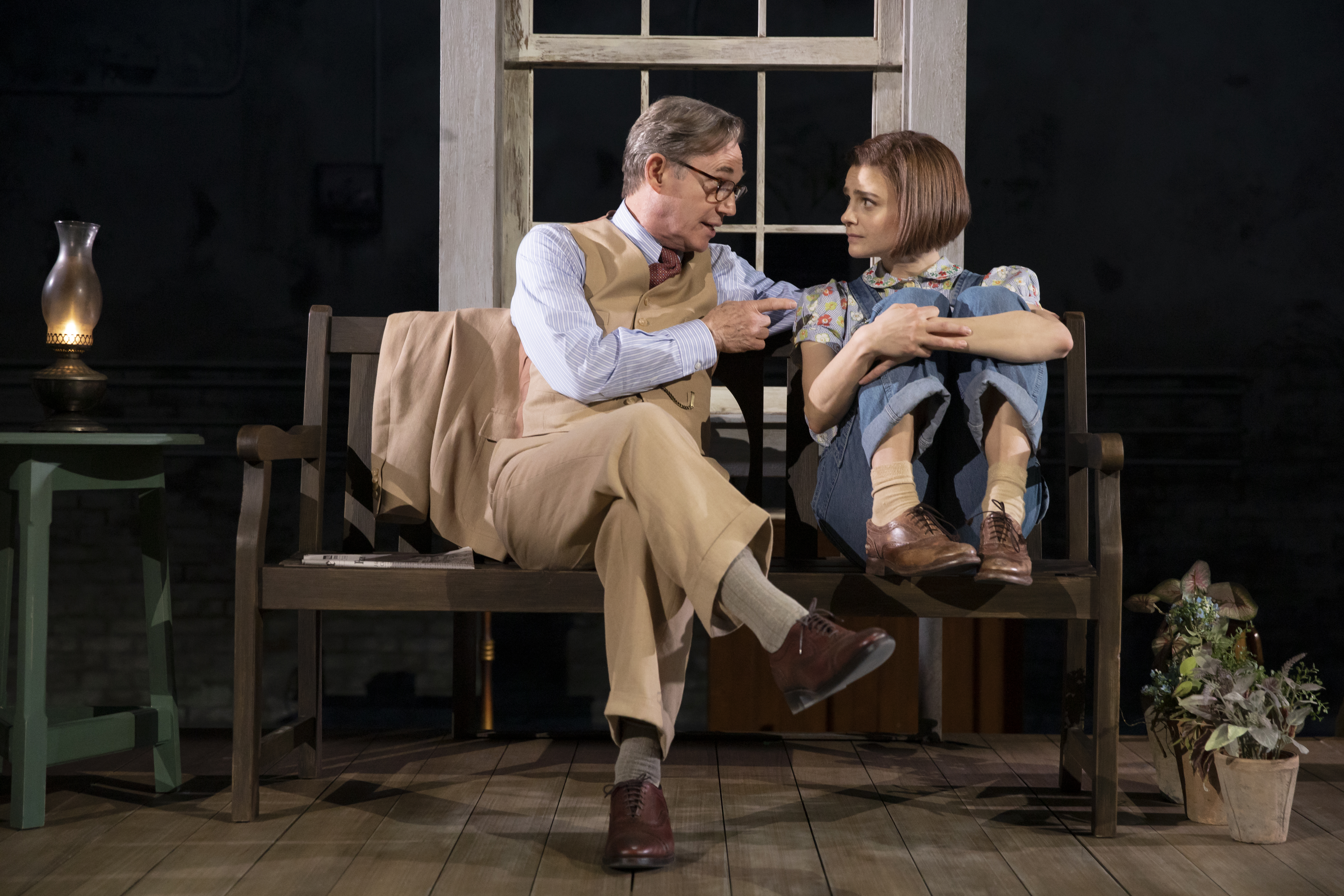 REVIEW: Harper Lee’s “To Kill a Mockingbird” at Proctors

I am but one of many who consider To Kill a Mockingbird a favorite novel, and the 1962 film adaptation a favorite movie. Stage adaptations I’ve seen over the years have pretty much left me cold.

Now the superb road company of Aaron Sorkin’s most recent, highly acclaimed version is gracing the stage at Proctors, and keeping in mind that it will be there only through June 19, I would urge you to seize the opportunity to see it.

Under Bartlett Sher’s graceful, seamless direction, Sorkin’s adaptation captures the heart and soul of the original work. As Atticus Finch, Richard Thomas delivers a bravura performance of a kind, courageous, flawed human being. The flaws make Atticus’s decency more deeply felt. Thomas conveys Atticus’s goodness and his internal struggles in a manner that is nothing short of magnificent, and the entire company is just as wonderful.

Sorkin’s device of using the three children, Scout (Melanie Moore), her brother Jem (Justin Mark), and their friend Dill (Steven Lee Johnson), as narrators of sorts is as affecting as it is clever. I was initially taken aback by the physical heights of these three–they are clearly young adults–but they are such fine actors that within moments I completely believed that they were the children I remembered from the novel.

Sorkin’s adaptation also succeeds because he tweaks the timeline of events. The play begins in a courtroom, and subsequent scenes go back in time. The children, with their constant questioning and probing, expand the play, and, not incidentally,  provide a graceful strategy for making us aware of Atticus’s flaws.

In 2018, the Harper Lee estate filed a suit, saying that Sorkin’s proposed play varied too much from the book, claiming that Atticus was presented as being far less dignified. Fortunately, the suit was settled out of court. I suspect that representatives of the estate confused idealization with dignity.

As Calpurnia, Jacqueline Williams is outstanding in her strength of character. I was gratified that Sorkin enhanced the role of the woman who runs the Finch household and cares for the children. Williams gives us a complex and complete human being with a powerful stage presence. I did have a problem with some of the dialogue Sorkin created, most likely stemming from his understandable desire to elevate Calpurnia to a fully realized character. The action takes place in the small town of Maycomb, Alabama in 1934. During a spirited exchange with Atticus, Calpurnia admits to being “passive-aggressive.” I cannot find any use of that expression before World War II, and even then, it was quite some time before it entered the mainstream. Sorkin also has one of the children describe Atticus and Calpurnia as being “like brother and sister.” I cannot believe that description would have been used in 1934 Alabama, no matter how progressive the household. To Kill a Mockingbird is harshly, necessarily realistic, and I only wish that Sorkin had created more realistic methods to honor Calpurnia.

Yaegel T. Welch is heartbreakingly vital as Tom Robinson. In Sorkin’s version, Robinson’s morality–and dignity– is so solid he knowingly testifies in the courtroom in a way that he realizes could seal his terrible fate. As Bob Ewell, Joey Collins is terrifying yet three-dimensional. We may find him hateful, but we have some insight into his deep rage. Arianna Gayle Stucki is superlative as Mayella Ewell, a terribly damaged young woman at the mercy of her father.

It was a particular treat to watch Mary Badham, who played Scout in the 1962 film, give a fine performance as the vinegary Mrs. Henry Dubose.

All of the technical aspects of To Kill a Mockingbird are top-drawer, from Miriam Buether’s cleverly morphing set design, to Jennifer Tipton’s deeply effective lighting design, to Scott Lehrer’s potent sound design. Ann Roth’s costumes are flawless. Adam Guettel’s original music, evocative and sumptuous, would have enhanced the play so much more had Proctors done a better job balancing the sound and dialogue. I felt a real sense of loss when this music was played at such a high volume that it obliterated the spoken dialogue. Unfortunately, this is often a problem at Proctors.

All in all, I can’t recall such outstanding across-the-board talent in such a large cast, and with Bartlett Sher’s superb direction, and Aaron Sorkin’s fine adaptation, To Kill a Mockingbird is a gift.

The show run time is two hours and 35 minutes, including one 15-min intermission.

Tickets to Harper Lee’s To Kill a Mockingbird are available from the Proctors box office by visiting Proctors.org, or by calling 518-346-6204. For more information, please visit proctors.org.