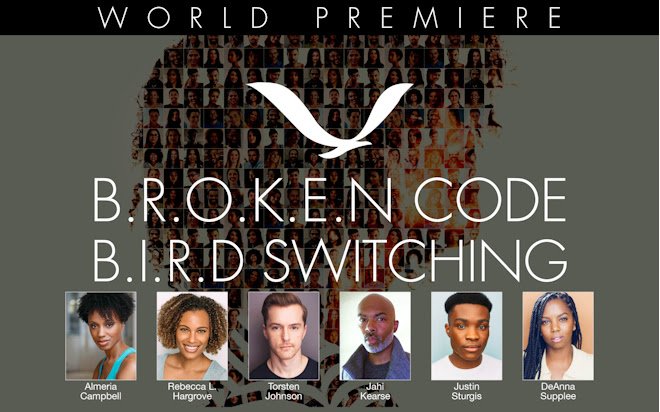 A timely story about a woman, representing a black teenager accused of murder, who is forced to face truths about her marriage, race and choices she’s made.

Pittsfield, MA – The world premiere of B.R.O.K.E.N code B.I.R.D switching written by Tara L. Wilson Noth and directed by Kimille Howard will take place June 23 through July 9 at the Berkshire Theatre Group‘s Unicorn Theatre. This project is an award recipient of the Grants For Arts Projects from the National Endowment for the Arts.

In this timely play, a woman representing a black teenager accused of murder is forced to face truths about marriage, race and the choices she has made and the unspoken lies she told herself to conform. Wilson Noth says, “I believe in the power of words. I believe they are the greatest strength this world has… I feel very fortunate that I could use my words to craft this story. It is a story of race and identity, of promise and purpose… but perhaps more importantly, it is the story of the potency of being seen. The universal need to be seen for who we are. When we truly see each other, we can begin an honest dialogue… I hope this play can succeed in beginning that conversation.”

For the 2022 Season, BTG is offering a BTG Bundle. With this bundle, purchase one ticket to four of the upcoming BTG produced shows for $200 (fees included), equalling a discount of up to 66%. This offer is good for any seat to any produced performance. The discount is not retroactive and must be applied at point of purchase. This offer is available by phone or in person only.

Tickets for all of BTG’s exciting summer season productions are on sale now. All plays, schedules, casting and prices are subject to change. To purchase tickets, visit www.BerkshireTheatreGroup.org or contact the Colonial Ticket Office by calling 413-997-4444.

The ticket office is open Tuesday through Sunday 12pm-5pm or on any performance day from 12pm until curtain.

After unbearable loss, a grieving attorney takes a pro bono case representing a black teenager accused of murder. When an alluring stranger steps in to help, she is left questioning who she is and what she wants. While fighting for the young man’s innocence, she is forced to confront the devastating truth about marriage, race and the woman she has chosen to be.

B.R.O.K.E.N code B.I.R.D switching, written by Tara L. Wilson Noth, is a play about the choices we make and the unspoken lies we tell ourselves to make peace with those choices. This World Premiere and National Endowment for the Arts Grants For Arts Project award recipient will be directed by Kimille Howard (Regional: Quamino’s Map, Highway 1, USA, Night Trip, The Visit, The Passion of Mary Cardwell Dawson) and will feature Almeria Campbell (Off Broadway: Night Club Cantata; TV: Law & Order Criminal Intent) as Evelyn Payne; Rebecca L. Hargrove (Regional: In the Parlour, Evita and Cabin in the Sky, Aquanetta; National Tour: The Mikado; TV/Film: House of Cards, Random Acts of Flyness, My Asian Auntie, The Fix, Single Record) as Katherine Morgan; Torsten Johnson (Off Broadway: Dying City, Macbeth, A Connecticut Yankee in King Arthur’s Court. Regional: Lion in Winter, Sense and Sensibility, Hay Fever, A Christmas Carol) as Mark Bennett; Jahi Kearse (Broadway: Ain’t Too Proud, Holler If Ya Hear Me!, Baby It’s You!; Off Broadway: The Total Bent, The Fortress of Solitude) as Olen Porter; Justin Sturgis (The Scottsboro Boys, Spring Awakening, Into the Woods, Elegies For Angels, Punks and Raging Queens, Disaster!) as DeShawn Payne; and DeAnna Supplee (Off Broadway: The Winter’s Tale, On Strivers Row, Much Ado About Nothing, The Trojan Women, Fires in the Mirror, Laundry & Bourbon, Platanos Y Collard Greens, Romeo & Juliet) as Olivia Bennett.

Almeria Campbell (Evelyn Payne) grew up in Texas where she began acting—first in high school, and then at Texas Christian University. After attending Mason Gross School of Performing Arts at Rutgers University, Almeria made her TV debut on Law & Order Criminal Intent. Most recently she was in Night Club Cantata at the cell theater and also in New Amsterdam.

Rebecca L. Hargrove (Katherine Morgan) is pleased to join the cast of B.R.O.K.E.N code B.I.R.D switching in her first season with Berkshire Theatre Group. Previous productions include: In the Parlour (National Black Theater), Evita and Cabin in the Sky (City Center Encores!), Aquanetta (Bard Summerscape) and The Mikado (National Tour). Rebecca has also spent the past two seasons at The Metropolitan Opera in their productions of Die Meistersinger (Wagner), Fire Shut up in My Bones (Blanchard), and the 2020 Grammy Award-Winning Porgy and Bess (Gershwin). She has performed in concerts at Carnegie Hall, John F. Kennedy Center, David Geffen Hall and 54 Below. Her TV/Film credits include: House of Cards (Netflix), Random Acts of Flyness (HBO), My Asian Auntie (Amazon Prime), The Fix (Short Film) and Single Record (Revry).

Jahi Kearse (Olen Porter) is thrilled to be making his Berkshire Theatre debut as a part of this exciting work. Broadway credits: Ain’t Too Proud (The Imperial), Holler If Ya Hear Me! (The Palace), Baby It’s You! (The Broadhurst). Off Broadway credits: The Total Bent, The Fortress of Solitude (The Public Theater). Select Regional Credits: A Christmas Carol (DTC), Lungs; Satchmo at the Waldorf, Bars & Measures (B Street), IndianJoe (Goodspeed), Maurice Hines’ Yo Alice (Radio City Music Hall), Debbie Allen’s Souls Possessed, Seussical (The Alliance Theater), Passing Strange;, Motherf**ker with the Hat, Topdog/Underdog (Studio Theater), Gut Bucket Blues; Sty Of The Blind Pig, Two Trains Running (True Colors). Jahi is a proud alumni of (YEA): The Freddie Hendricks Youth Ensemble of Atlanta and (TCHS): Tri-Cities High School For the Visual and Performing Arts.

Justin Sturgis (Deshawn Payne) is a recent graduate of NYU Tisch School of the Arts in the Department of Drama’s New Studio on Broadway and is excited to be working with Berkshire Theatre Group this summer. Justin previously appeared in Playhouse on Park’s production of The Scottsboro Boys (Roy Wright) and Capital Rep’s Next Act! New Play Summit in The Luckiest Trilogy (Josh). Other past performances include: Spring Awakening (Georg), Into the Woods (Jack), Elegies For Angels, Punks and Raging Queens (Lamar) and Disaster! (Scott).

ABOUT THE CREATIVE TEAM

Tara L. Wilson Noth (Playwright) is a graduate of The American Academy of Dramatic Arts in NYC and furthered her studies in playwriting at UCLA Ext Writer’s Program. She has several scripts in development including Riders of the Storm, based on the book Requiem and Storyville, based on the first American Red Light District. Tara’s play B.R.O.K.E.N code B.I.R.D switching was awarded the 2022 National Endowment of the Arts grant. (www.arts.gov). It was workshopped at The Berkshire Theatre Group before it enjoyed a sold out limited run in Los Angeles. The play returns to BTG for its world premiere this summer season.

Joseph Poulson (Fight Choreographer) is originally from Philadelphia, PA and received undergraduate and graduate degrees from the University of Iowa and Bennington College respectively.  A rehearsal director and performer in Punchdrunk’s New York Production of Sleep No More, between 2000 and 2015, he was a member of Bill T. Jones/Arnie Zane Dance Company, Susan Marshall & Company, David Dorfman Dance, Bill Young/Colleen Thomas and Dancers, Creach/Co. and Aconarytorsi. He received a New York Dance and Performance “Bessie” award in 2009.

Caroline Stamm (Stage Manager) Originally from central North Carolina, Caroline relocated to the beautiful Berkshires to continue pursuing her career in Stage Management with Berkshire Theatre Group. This summer at BTG, Caroline will also stage manage B.R.O.K.E.N code B.I.R.D switching. Recent BTG credits include: Footloose (SM), Magic Tree House: Dinosaurs Before Dark (SM), White Christmas (PA), The Wizard of Oz (SM), Holiday Memories (PA), Godspell (PA), A Christmas Carol (2019 SM, 2018 SM, 2017 ASM), Other favorite regional credits include: The Barber of Seville (ASM) at The Greensboro Opera and Beautiful Star (ASM) at Triad Stage. Caroline is a graduate from the University of North Carolina at Greensboro (‘17), where she obtained her BFA in Technical Production (with an emphasis in Stage Management) and minored in American Sign Language.

Alan Filderman (Casting Director) This is Alan’s 30th season casting for Berkshire Theatre Group, where he also directed You’re A Good Man, Charlie Brown and Godspell. Casting credits include Broadway and Off Broadway: 33 Variations, Grey Gardens, Marie Christine, Master Class, Once on This Island, Fiorello, Dessa Rose, Here Lies Jenny, A New Brain, A Beautiful Thing, Three Tall Women, From the Mississippi Delta, Song of Singapore, The Sum of Us. In addition, Alan has cast for regional theatres all over the country. Films include: Ice Age, Broadway Damage and Anastasia.

The Colonial Theatre, founded in 1903, and Berkshire Theatre Festival, founded in 1928, are two of the oldest cultural organizations in the Berkshires. In 2010, under the leadership of Artistic Director and CEO Kate Maguire, the two organizations merged to form Berkshire Theatre Group (BTG). Berkshire Theatre Group’s mission is to support wide ranging artistic exploration and acclaimed performances in theatre, dance, music and entertainment. Every year, BTG produces and presents performances to over 68,000 attendees and, through our Educational Program, serves over 11,000 Berkshire County school children annually. In July

2020, Berkshire Theatre was the first company in the United States to earn approval from