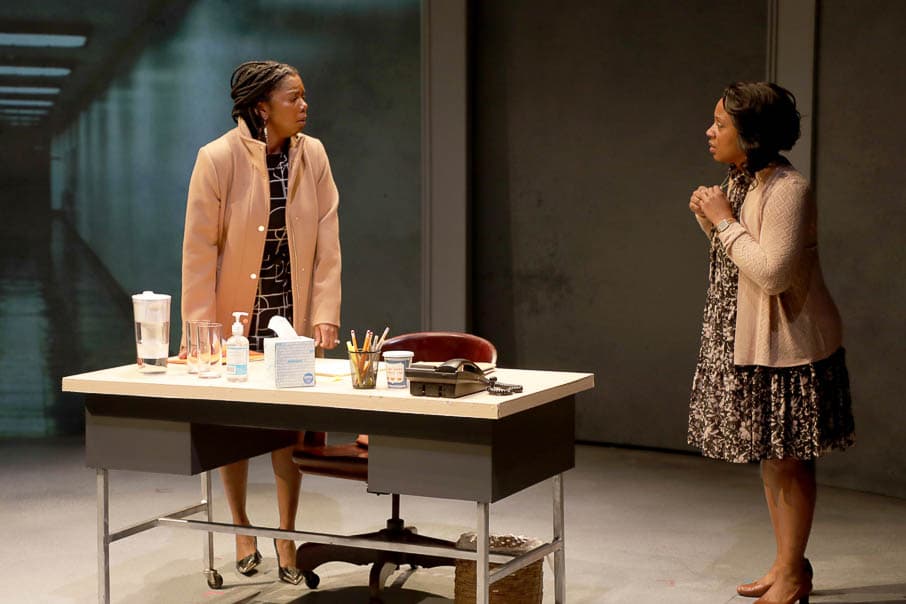 In a program interview Tara L. Wilson Noth, the author of “B.R.O.K.E.N code B.I.R.D switching” says, “I would love for people to acknowledge that change is not possible if we aren’t willing to see that different realities and different truths exist and that’s what informs choices, outlooks and outcomes.”  This multi-plotted play is receiving an engrossing production at Berkshire Theatre Group’s Unicorn Theatre in Stockbridge, Massachusetts.

(Note: “B.R.O.K.E.N B.I.R.D” refers to “A Dream Deferred,” a poem by Langston Hughes that is used in the play;  “Code Switching” is a phrase that means one may speak in a particular vernacular but will adopt another method when conversing with a person of a different origin.  There are scenes between highly educated people (attorneys) and clients who are not as sophisticated )

Olivia Bennett (DeAnna Supplee) is a criminal defense attorney.  She is visited by Evelyn Payne (Almeria Campbell) whose teen-age son Deshawn (Justin Sturgis) is in jail accused of murdering a white man.  Reluctantly, Olivia takes on the case.  At home with her husband Mark (Torsten Johnson,) also a lawyer, their bantering about a social gathering turns into an argument in which their perspectives of the issue are attributed to the fact that he is white and she is African-American.

This is the beginning of an extensive series of conflicts that brings drama to Noth’s comment.  Not only are the Bennetts at odds but Olivia finds Deshawn to be an uncooperative client.  During one of her interviews with him Porter, (Jahi Kearse) an independent photographer, arrives, with Evelyn’s permission, to follow the developing case.  At his office, Mark meets with a colleague, Katherine Morgan (Rebecca L. Hargrave) who has more on her mind than simply working with him.

One of the strengths of this script is that these several plots intertwine giving credence to Noth’s comment “…different realities and different truths exist and that’s what informs choices, outlooks and outcomes.”  This, by the way, is what is called “life.”  As the play evolves, back- stories and character traits are revealed giving depth to the characters, their relationships and the story line.  Toward the latter part of the play there are some melodramatic moments, but they do not minimize the intense impact of the production.

The acting is uniformly excellent, though, at times, Ms. Hargraves is difficult to hear.  Ms. Supplee is magnetic.  She carries the bulk of the story as Olivia faces the greatest of the conflicts and grows in strength despite the problems she confronts.  Much of her development occurs subtly.  Mr. Johnson’s Mark, in contrast, doesn’t have Olivia’s passion.  In their quarrels he is rational opposed to her intensity.  Both of them receive our empathy.  Mr. Sturgis and Mr. Kearse do gritty work while Ms. Campbell draws our sympathy as the deeply distressed mother.

Kimille Howard’s direction is solid.  The pace never flags, though the scene changes could be quicker.  For some scenes there is excessive furniture when a couple of chairs would suffice.  She covers some of this by having the characters miming onstage.  Also, there are manifold projections of photographs, graphics and written messages designed by David Murakami that have a dramatic impact.  The strength of the acting and the stage pictures she creates are extremely effective.

All the technical elements support Noth’s and Howard’s interpretation.  Baron E. Pugh’s basic set is simple… four sliding doors with a gray and white wash on the surrounding walls keeps the focus on the actors and the action.  The neutral colored walls allow for the projections to be seen clearly and quite large.  The lighting, designed by John D. Alexander, is intriguing employing varying hues from delicate to vivid  underlining the emotional quality of each scene as well as giving the transitions texture.

The costumes by Danielle Preston inform us of each character’s personality and station in life.  Michael Keck’s sound also supports the various tones of the production.

In addition to focusing on relationships, The script also dramatizes other themes: racism imprisonment, and the law.  This play is rife with ideas.  The work by Noth, Howard and their cast is overwhelming in its honesty and power.  This is a play to see if you are ready for an emotional and touching experience.