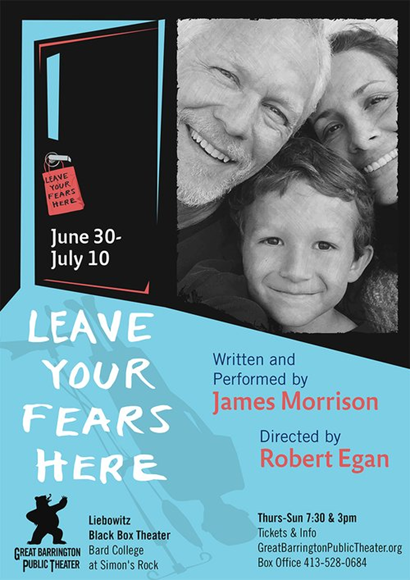 The Great Barrington Public Theater‘s 2022 four-title Solo Fest concludes with Leave Your Fears Here (June 30 – July 10), a loving memoir written and performed by accomplished stage and screen actor James Morrison. In a touching performance that legendary producer Norman Lear called “An extremely moving play by an extremely moving performer”,the actor recounts his 10-year-old son Seamus’s brain cancer diagnosis through treatment to recovery, and how he brought courage and change in others, most notably his father. It’s a heroic poetic expression of the power of hope and triumph in the darkest hours.

When Seamus suddenly faced physical debilities and a life-threatening diagnosis, Morrison, his wife and family had to face hard reality while simultaneously navigating the daunting medical processes. They found themselves transcended by Seamus’s courage, brightness and ability to face his harrowing experiences with strength, humor and poetic nature.

Directed by Robert Egan, Leave Your Fears Here was developed and first staged at the multi-award-winning Ojai Playwrights Conference, where Egan has been Artistic Director since 2002

Audiences will recognize James Morrison from 24, Law and Order SVU, The West Wing, Six Feet Under, Twin Peaks: The Return and other series and movies. He notes, “If making our journey public allows one person to feel hope or gratitude as they navigate, battle and conquer their fears, I’ve succeeded beyond measure.”

Leave Your Fears Here will be staged ten times only, from June 30-July 10, Thurs.-Sun., 7:30pm and 3pm, in the Liebowitz Black Box Theater, Bard College at Simon’s Rock, 84 Alford Rd, Great Barrington, MA 01230. Advance tickets are encouraged and can be made on the Great Barrington Public Theater website.

James Morrison has played hundreds of roles on stage, film and television in the last 45 years, most notably on 24 as Bill Buchanan and Twin Peaks: The Return. For his work onstage he received the Los Angeles Drama Critics Circle Award and appeared at the Mark Taper Forum, McCarter Theatre, the Old Globe, La Jolla Playhouse, London’s Donmar Warehouse and Riverside Studios, and the Alaska Repertory Theatre (in his hometown of Anchorage) where he served his apprenticeship. As a filmmaker, James co-produced/directed the documentary, Showing Up: A Conversation About the Audition with his wife, Riad Galayini.