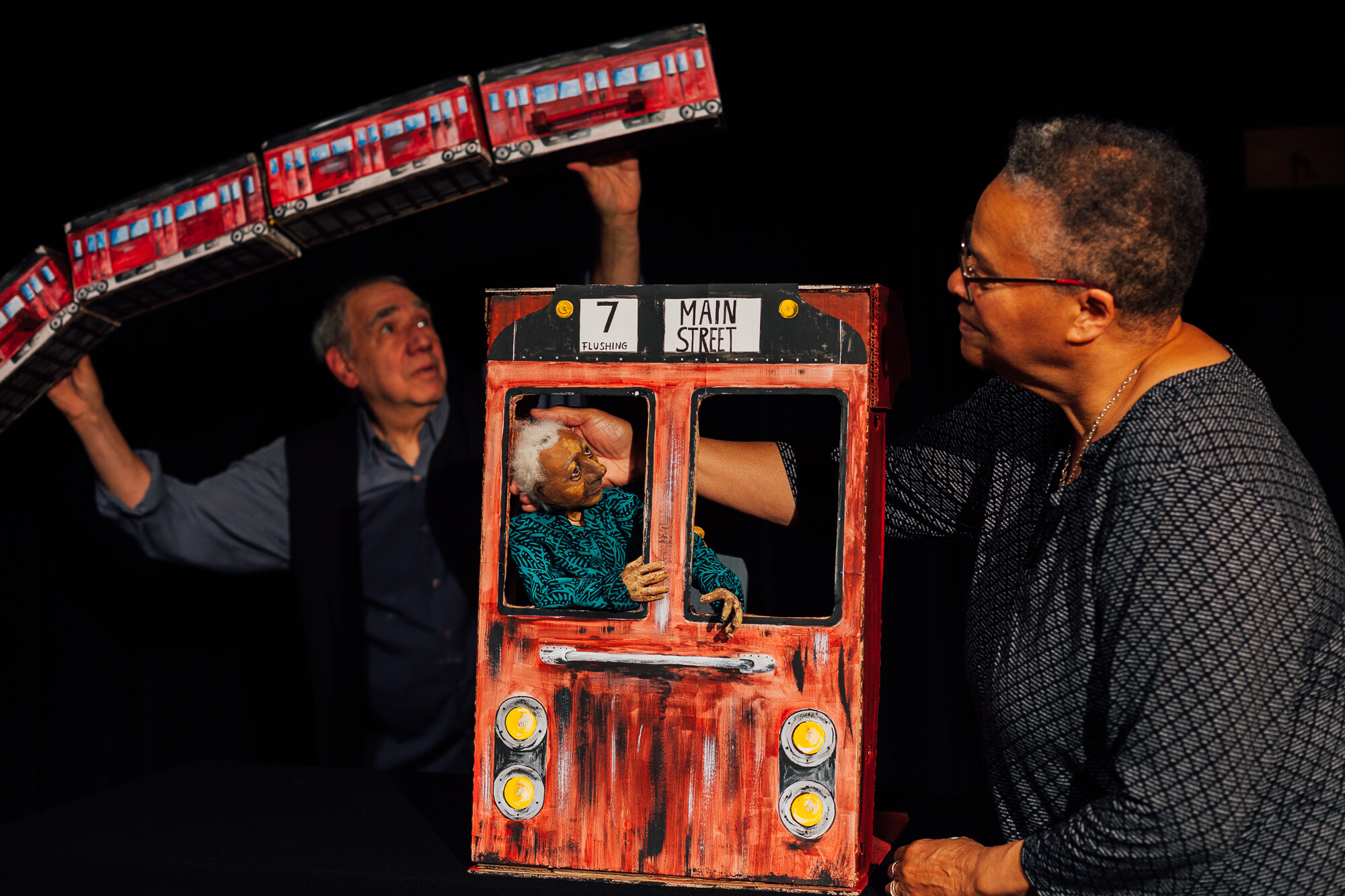 A story told with puppets, with songs, and with a deep personal investigation of how Time brings us all to moments of truth and inevitable change, “Flushing”begins at the Brink, where two theater directors are passing the leadership of their ensembles to the next generation. This moment sparks a reflection on what it means to retire and what it might mean to inherit. For those stepping down, what do we leave and who do we become? And for those stepping up, how do we take what is given and make it our own?

After years of knowing each other as theater colleagues, Linda and Eric discovered by chance that they grew up only a few miles apart at around the same time in Flushing, NY. Though their life paths took them in different directions and to different parts of the globe, they once again find themselves in a similar place–in the process of handing their theater companies to a younger generation of leaders and facing the Brink of leadership succession. “Flushing” is a journey that the audience takes with Linda and Eric from present to past to present and engages with issues of race, legacy, and identity. As the co-creators put it, “Together, we look into the abyss, sometimes from the edge of a South American volcano, sometimes from the window of a speeding subway train, sometimes through our parent’s nightmares to connect with where we come from and how we got here.”

“Flushing”was developed over a series of workshop residencies in Vermont, Maryland, and Tennessee.  The production team for this performance also includes puppet designer Ines Zeller Bass and lighting designer Sabrina Hamilton, with additional recorded music by Julian Gerstein and choreographic support by Shoshana Bass. Post-show discussions with the artists and special guests, about the show and the themes it raises, will follow each performance.

We welcome back the “KoFest Story Slam & Celebration” on the Sunday, July 24 at 8pm. A celebration of KoFest’s three decades, fit will feature true stories on the season’s theme of “Stepping Up / Stepping Back.” There will be some ringers, and also some wild-card slots, for these stories about transitions. Potential storytellers can email info@kofest.com to pitch a story. After all the competing storytellers have gone, while the audience votes are being counted, there will be a special interlude with Sara Felder, solo performer, juggler extraordinaire, and KoFest audience favorite (“Out of Sight,” “A Queer Divine,” and “If I Can’t Juggle,” “It’s Not My Revolution”). Felder is flying in from the Bay Area for this special performance.  After the prizes have been awarded, the audience is invited to stay for a celebration of KoFest’s three decades of bringing outstanding performances to the Valley.

LINDA PARRIS-BAILEY is a Playwright, Director and Actor with more than 46 years of experience. She served as the Executive/Artistic Director of Carpetbag Theatre and was their primary playwright from 1974-2019. As an independent playwright and artist, she has been commissioned by professional and community-based partners such as Touchstone Theater, The Higher Ground Project and Junebug Productions. Parris-Bailey has curated events and festivals for several organizations including Women’s Playwrights International, American Festival Project and Performing Americas (NET). She has provided culturally-driven facilitation services to organizations such as The Highlander Center, The W. K. Kellogg Foundation and the African Theatre Association (AfTA) International Conference. Her company, Parris-Bailey Arts, supports diverse voices and the work of playwrights, solo artists and ensembles in the development of new performance works by creating opportunities for mentoring, networking and sharing of resources during the creation process.  Linda was previously at the Ko Festival in 2011 with Carpetbag Theatre developing her script, “Speed Killed My Cousin.”

ERIC BASS is Co-Founding/Co-Artistic Director of Sandglass, has worked for over forty years as a director, playwright, performer and mask and puppet maker. In 1982, Mr. Bass founded Sandglass Theater in Munich, Germany, with his wife, Ines Zeller Bass. As a stage director, Eric has worked on four continents and his signature solo work, “Autumn Portraits,” toured around the world for three decades. His international projects include co-directing “The Story of the Dog” with Sovanna Phum Theater in Cambodia, “Natan el Sabio” with Teatro Luis Poma in El Salvador, and a puppet production of Tennessee Williams’ “Glass Menagerie” for Theater Waidspeicher in Germany. Eric toured for six years in the Sandglass production of “D-Generation: An Exaltation of Larks,” a piece about people with dementia that premiered at the Ko Festival in 2012. He continues to travel with “Babylon, journeys of refugees,” Sandglass’ puppetry and music exploration of the issues of fleeing war and violence and of how asylum seekers are received in a new homeland. Eric served for five years on the board of the Network of Ensemble Theaters. In 2010, he received the Vermont Governor’s Award for Excellence in the Arts. He first appeared at the Ko festival in 2003.

INES ZELLER BASS (Puppet and Stage Design) is a Co-Founder of Sandglass, has been performing with puppets since 1968, when she became a member of the Munich marionette theater, Kleines Spiel. In 1978, she created her children’s hand puppet theater, “Punschi” which has toured Europe, Australia and the US. In 1982, Ines co-founded Sandglass Theater with husband Eric in Germany and moved the theater to Vermont in the mid-1980s. Ines started Sandglass Theater’s program for family audiences. Together with Eric, she teaches their approach to puppetry performance and devised composition in workshops in Vermont abroad, and at the Ko Festival. She designed the puppets and set for “Natan El Sabio,” a collaborative project with Teatro Luis Poma in El Salvador. Ines’ puppets and design for “Babylon: Journeys of Refugees,” Sandglass Theater’s production, include two of her many crankies. Ines has last been touring with Sandglass’ production of “D-Generation, An Exaltation of Larks,” a piece about people with dementia. She is an UNIMA citation winner and in 2010, received the Vermont Governor’s Award for Excellence in the Arts. Ines has retired from touring but is still very connected to Sandglass through her designs and puppet building. Ines has also built the Little Merrill puppet for Tune Yard’s new music video.

KATHIE deNOBRIGA is a founding member of Alternate ROOTS, a service organization for community-based artists in the South; she served as ROOTS’ executive director and planning/development director for ten years. Raised in Kingsport TN, deNobriga holds theatre degrees from Wake Forest University in Winston-Salem, NC. She has directed scores of community and professional theatre productions across Tennessee, North Carolina and Georgia, including short puppet plays at the Center for Puppetry Arts and 7Stages in Atlanta. DeNobriga served as Mayor for the City of Pine Lake, where she is an advocate for and practitioner of arts and community development. She recently semi-retired as a consultant specializing in strategic planning.

KIRK MURPHY, long associated with Sandglass Theater, is a puppeteer and musician based in southern Vermont. He has toured extensively with the company, performing first with Sandglass Theater in their collaboration with Cambodian shadow puppet theater Sovannah Phum beginning in 2005. He last appeared at the Ko Festival in “D-Generation, An Exaltation of Larks,” Sandglass’ award winning piece that explored the creative potential of people living with mid to late stage dementia.

SABRINA HAMILTON co-founded and is the Artistic Director of the Ko Festival of Performance in Amherst, MA. For many years she worked with the New York theatre company Mabou Mines as Lighting Designer, Production Manager, Stage Manager, Performer, and Assistant Director.  This June she was invited to create an installation version of Starcock for the “Mabou Mines 50th Anniversary Celebration,” a piece she first worked on in 1985. She has spent much of the past several years lighting shows and touring with Sandglass Theater. Collaborations with Sandglass include lighting “Autumn Portraits,” “All Weather Ballads,” “D-Generation: An Exaltation of Larks,” the show that closed Ko’s season on “Age & Aging,” and “When I Put On Your Glove.”