REVIEW: “Urinetown” at the Mac-Haydn Theatre 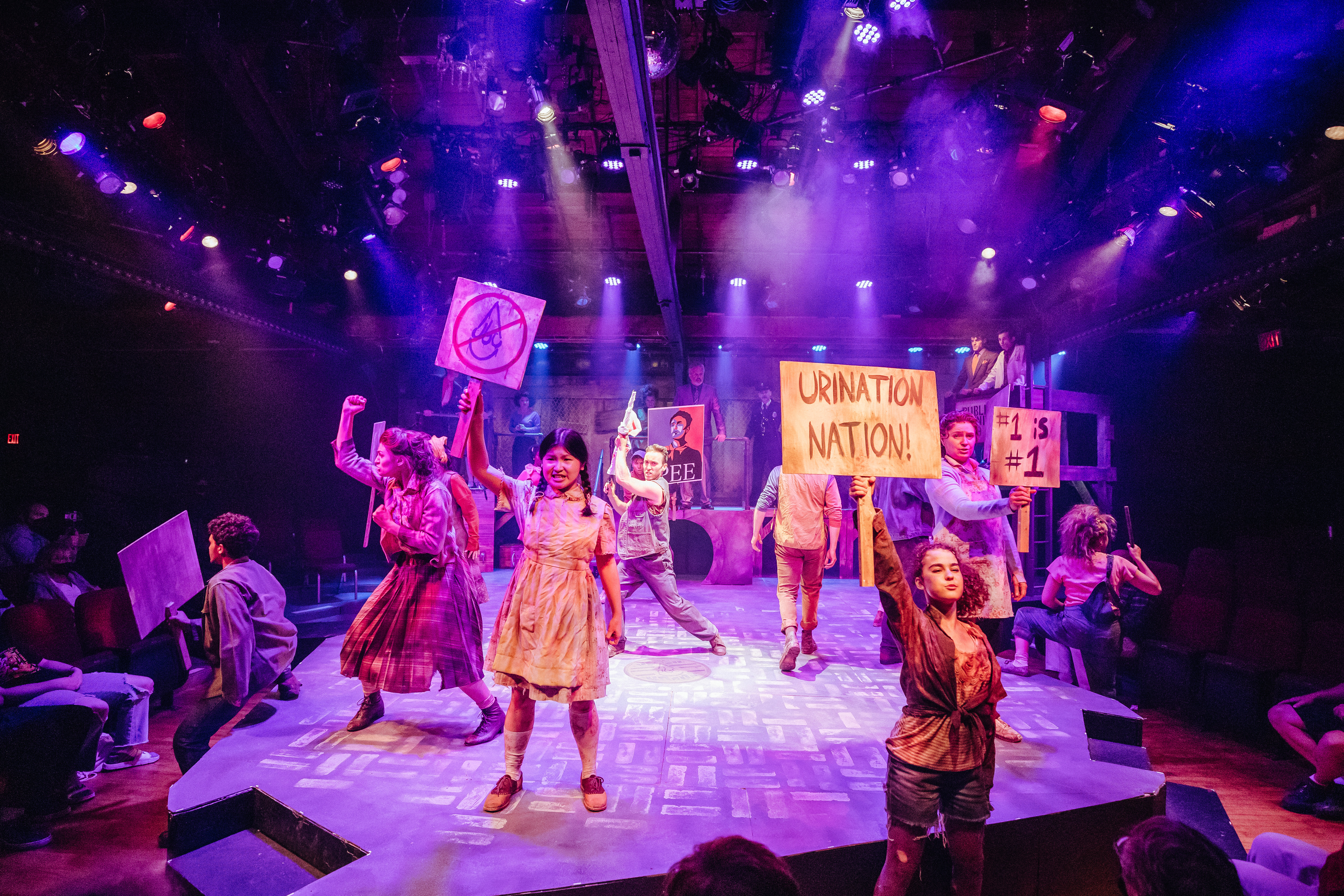 REVIEW: “Urinetown” at the Mac-Haydn Theatre

Satire? Farce? Social Commentary? Political humor? Ecological & Environmental Propaganda ? Black comedy? Don’t bother trying to slot the Mac-Haydn‘s first-ever production of Urinetown into its “proper place” in musical theatre; it doesn’t have one. What it does have is a place as a show that checks all of the above boxes, and over the course of 2 hours, provides a thought-provoking, highly entertaining, often-hilarious, energetic, enthusiastically performed evening of theatre. The Number 2 show of the season, about the performance of Number 1 in the Bathroom Ablutions World, is a lovely treat to be enjoyed on a hot summer night.

There is really no way to clearly explain what passes for a plot. Reduced to dry bones basics, a drought has caused such a severe water shortage that private toilets are forbidden, public facilities are controlled by the evil Urine Good Company,and frankly, and inevitably, the natives are getting restless. Rebellion, conflict, protest, bribery, revelations, confessions, and true love ensue, framed by not just a little singing and dancing, gasping and prancing along the way. At one point, Officer Lockstock declares “This isn;t a happy musical”; he’s not wrong—SPOILER ALERT—Everybody dies—but it most assuredly has its moments. There is the requisite Girl Meets Boy love story, the good vs. evil story line, the dancing of the revolting peasant/unwashed masses/rebel rabble, the periodic interjection of Greek chorus-like commentary, and enough dynamic tension to keep the plot, and the cast, moving toward the inevitable Grand Finale.

As one of my former English professors would say, Urinetown is great good fun, It is also a show with layers of meaning to be extracted. As the audience, our best choice is to simply sit back,and let the layers of this show peel away like an onion that undoubtedly smells better than the putrid atmosphere permeating the air at Public Amenity #19, where the huddled masses have gathered, anxiously waiting their turn to relieve themselves. As a side note, this time the “harmless chemical effect” haze which wafts through the theater at appropriate moments is perfectly suited to the setting of a seedy, steamy, filthy town where its citizens have gathered waiting for the “Privilege to Pee.” Would that this trend continues for the duration of the season.

Directing for the first time at the Mac, Trey Compton hits this production all the way out of Urinetown…wherever, or whatever, that may be. He offers up a tight, taut, and razor-sharp show, and seems to have a natural, instinctive knack for making the best use of the Mac’s performance space, virtually writing a textbook on how to make the most effective use of the larger, reconfigured stage unveiled last season. He puts the cast through their considerable paces with precision and flair, extracting their best efforts through every layer of this show.

Audiences will relish the return of favorite Gabe Belyeu in a vocal role as Officer Lockstock, the narrator of the piece and Keeper of the Pee-ce in “Urinetown, the musical…not Urinetown, the place”, as he repeatedly takes pains to distinguish between the two. With many a wink, frequent quick step-turns to address the audience, great panache,and sharp comedic timing, Belyeu positively oozes with the droll irony needed to carry off Officer Lockstock’s unctuous and zealously crime-deterrent character. He is perhaps at his best in the moments spent in conversation with Little Sally, played with aplomb, and great earnestness, by Sarah Chiu. Little Sally provides us, and Officer Lockstock, with those Greek-chorus moments so essential to “real” theatre–”Your critic said, tongue firmly in cheek”, serving as the Voice of Conscience and pointedly assuring that we do not miss the themes of love, greed, corporate corruption, righteousness, justice, the legal system, and personal toilet habits as they unfold before us. Sadly, though, we are never to learn just exactly WHAT “metaphysical” means in Little Sally’s world, as she manages to successfully escape Lockstock’s loose clutches before such wisdom can be imparted. Perhaps that is to the good–to each our own interpretation….

As Caldwell B. Cladwell George Dvorsky offers up his best impression of Snidely Whiplash as the smarmy, self-serving,essentially heartless CEO of the Urine Good Company (UGC), commanding,and indeed,demanding adulation and total subservience from both his unctuous, sycophantic office staff as well as the hapless Senator Flipp, who is firmly in Cladwell’s pocket as well as under his thumb. He clearly revels in the paean to his greatness “offered”–at his finger-snapped command—by his employees, as they welcome his daughter Hope to the office and into Daddy’s empire and its ill-gotten gains. The sheer malicious glee and greed with which Dvorsky delivers “Don’t be the Bunny” evokes shivers and smiles in equal measure. It is always a joy to have Dvorsky back on the Mac-Haydn stage; he adds Cladwell to his ever-growing list of signature roles.

Kylan Ross seems to be making quite a career at the Mac cast in an ever-growing succession of Everyman– Boy Next Door—All-American Hero—Faithful Sidekick—Hapless Lover roles to great effect, and here his Bobby Strong gives us yet another gem as the Tragic Heroic Figure ultimately doomed to unrequited love, and a fate worse than death, being exiled to Urinetown. Oh. Wait. That IS death. In any case, Ross seethes and bursts with all the fervor a rebel leader should possess as he leads a revolution against the tyranny of toileting inflicted by the UGC. He passionately implores his followers to “Run Freedom Run”, before things take a dark turn, and Bobby is summarily dispatched from Urinetown—the Musical—to Urinetown—The Hadean Hall of Death, martyred for the cause he so enthusiastically and even recklessly championed. Ross always commits every ounce of his considerable talents to every role he undertakes; Bobby Strong is the latest addition to his growing repertoire of signature characters.

Nina Laing as Hope Cladwell is the quintessence of the dewy-eyed, idealistic ingenue, falling head over heels for the clear Hero of the Piece Bobby Strong, while still maintaining a most literal outlook on life and love as she begins to “Follow your Heart”, She is the very personification of her character’s name, brimming and chirping with optimism throughout her ardous journey from naivete to disillusionment, clinging fast to Bobby’s injunction to “Follow your Heart” even as she is eventually doomed to suffer the same fate as her beloved Bobby.

Janet Dickinson as the Iron Fisted Keeper of the Privies Penelope Pennywise looks so much like Helena Bonham Carter Gone Grunge, if such a thing is even possible, that I half-expected a cameo appearance by Sweeney Todd, or a snippet of “Master of the House” to break out. She struts and blusters and and barrels her way around the stage, smacking her toilet brush with as much relish as the gusto with which she crushes the downtrodden under her boot-clad feet. Even when it is eventually revealed that she is—GASP!–Hope Cladwell’s mother, and offers herself in exchange for Hope’s life,her brash, domineering nature stands her in good stead as she and Hope lead the revolting poor onward to victory and the overthrow, quite literally, of Caldwell B. Caldwell, and the UGC. Dickinson is clearly enjoying her debut at the Mac with this role; she sinks her teeth, and her considerable vocal and acting chops, into Pennywise, and never lets go.

In a variety of supporting roles, the ensemble company is delightful. Singing, acting, moving, dancing, kidnapping, revolting, protesting, contemplating and otherwise whirling their way through the show,their enthusiasm and sheer happiness at treading the boards at the Mac is a joy to behold.

The attention to production value displayed in this production is as impressive as the performances. The quality of lighting, scenic design, and costumes is first-rate all around, and worthy of taking their own bows. There is absolutely nothing “piss-poor” abut Andrew Gmoser’s lighting, or Nick Caburis’s sound design. The pre-show lighting, with its perfectly pissy shades of yellow,fluorescent, neon greens, and dingy greys, literally bathes the stage for the story about to unfold. The show itself is perfectly lighted –harsh, unflattering white lights bathe the scenes at the UGC,clearly attempting to expose the “raw underbelly of the beast” of corporate corruption, while harsh reds, orange, and the afore-mentioned colors add menace, impending doom, pending tragedy at the appropriate pivotal moments.

The entering audience can’t help but be slowly mesmerized by the steady drip, drip, drip, plunk, FLUSH sounds not-so-subtly enhancing the atmosphere, and undoubtedly subliminally urging the audience to answer the siren call of nature to avail themselves of the facilities before the house lights flash for last call before curtain.

The costumes designed by Bethany Marx are done to a “T”, for both toilet and toilette. In the case of the oppressed and pee-repressed citizens, you can almost see the rank stench billowing off the attire of the Great Unwashed—or at least Unrelieved– population gathered at Public Amenity #19, and her dressing of the corporate lackeys in the employ of Cladwell is spot-on. Caldwell B. Cladwell is most certainly clad well with stunning touches of turquoise against a literally shiny grey suit, and Miss Pennywise’s ensemble, accessorized with filthy toilet brush and a stunning belt headband, is worthy of awards. The stunning hot pink dress for Hope Cladwell perfectly embodies the character’s bright, hope-filled outlook on life…even when bound, gagged, and hobbled in the throes of a kidnapping. Kudos all around !

Choreographer Elizabeth McGuire has built a production where,particularly in Act 1, much of the physical action is more structured, precisely timed movement than actual dance moves. The ensemble cast does a brilliant job of executing these moments, none more so than with the slow-motion Act 1 Finale. Act 2 brings more “traditional” choreography, again done to perfection by the cast under McGuire’s obviously expert tutelage. “RunFreedom Run” is the highlight of Act 2, with perfectly executed moves.

When the end has come, for Bobby, Hope,Cladwell, and virtually the entire company of Urinetown….the place, not the musical, as Officer Lockstock would be quick to note, will you leave humming the score, or indeed, any of the songs, from the show? Probably not. Will you think long and hard about the Rights of Man-and Woman, the corruption of politics, corporate greed, the future of our ecosystem, and other pressing social ramifications and ruminations? Highly unlikely,at least in the long range scheme of things. Will you be a little more appreciative of indoor plumbing, the freedom to flush at will and the God-given right to pee, the next time nature calls? Possibly, particularly as you head home from the theatre, and ironically, listen to news reports of potential pending drought conditions in New York and Massachusetts. It really doesn’t matter if you don’t take away A Big Message. What does matter is how highly disappointed you will be with yourself if you aren’t “privy” to seeing this delight of a show . Director Trey Compton and the Mac-Haydn Theatre should be “flush” with pride (you KNEW it had to be said !) offering up this absolute winner of a show.

Running time is 2 hours and 15 minutes, including intermission. COVID protocols in place include required proof of vaccination, and masking for audience members while in the theater.