REVIEW: “Man of God” at the Williamstown Theatre Festival 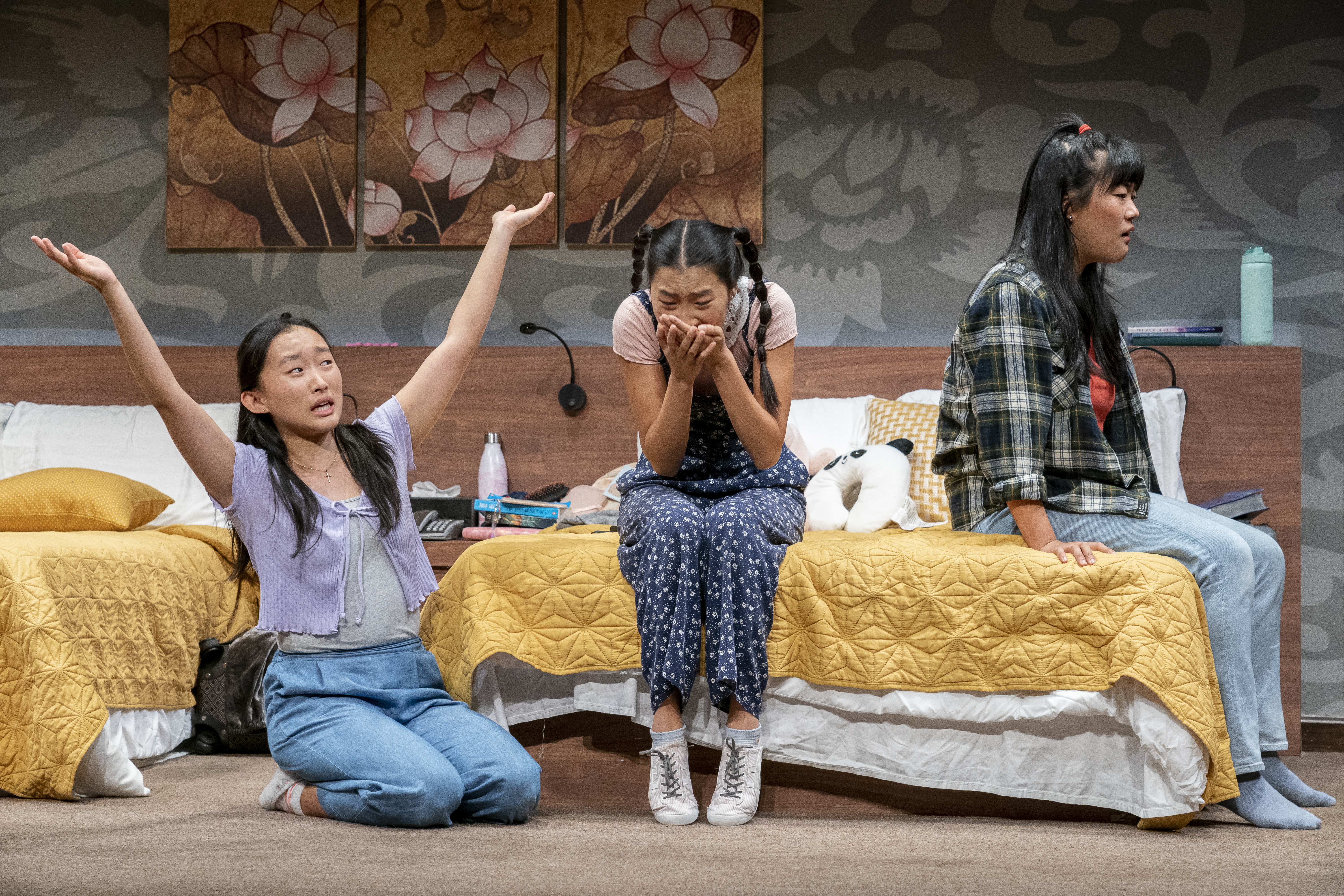 REVIEW: “Man of God” at the Williamstown Theatre Festival

MAN OF GOD by Anna Ouyang Moench, currently on the Nikos Stage at the Williamstown Theatre Festival, is an astonishing theatrical adventure. With a burst of K-Pop music, the lights come up on a hotel room in Bangkok and four Korean-American teenagers in a super big crisis. There is no exposition as we jump right into the chaos as the girls (all California Asian Americans on a mission trip to Thailand) screech and wail over their discovery of a camera hidden in their bathroom. It doesn’t take long for them to deduce that the camera was placed there by the pastor who has brought them to a questionable Thai neighborhood to save souls.

Described as a “funny feminist thriller” the play delivers as a black comedy that examines the full range of issues. The four roommates are all Korean teenagers but have vastly different backgrounds, which causes them to react to the crisis in different ways.

Samantha and Kyung-Hwa are pious and reserved and devoted to God and their mission. Whereas Mimi is up for a fun time in Bangkok, Jen is concerned with her dual career goals to become a lawyer and a doctor. None of them are entirely clear on what they are doing here—is it handling out religious pamphlets or saving pedophiles from sin.

Especially for Kyung-Hwa and Samantha, the revelation that the pastor is not what he seemed to be is shocking and deeply disturbing on multiple levels. “He’s a man of God!” they protest, but Mimi—the realist—tells Kyung-Hwa, “You may just need to recalibrate what you think that means.”

And recalibrate they do. In the process of deciding how to handle the violent assault on their privacy and core beliefs the girls attack one another but eventually gain a mutual understanding as they reveal past abuse and insecurities about sex and their place in the world. Moench’s script burns like a firecracker, with rapid repartee and brilliant humor. The energy never stops. It is especially effective as the young women indulge in fantasies of mayhem envisioning how to exact their revenge on the pastor.

This performance featured a highly talent cast of Asian American actors. Shirley Chen is terrifically funny and forceful as Samantha, the self-centered, beauty-conscious waif who transforms into a woman warrior in her revenge fantasy. Emma Galbraith brings a dignity and depth to the role of Jen, the over-achiever who fears the cost of the secret videos if they get shared on social media. Erin Rae Li is a force to be reckoned with in the role of Mimi—the foul-mouthed and angry teen who has a greater knowledge of the real world than the others. Li’s portrayal grounds the play as the four women come to grips with the violence on their privacy and sense of self. Most affecting is the sweet and moving performance of Ji-young Yoo as Kyung-Hwa. The most deeply religious of the four, the character of Kyung-Hwa has the greatest transformation in facing their impossible situation. Finally, Moench brings on the despicable perpetrator of the crime—the pastor. Albert Park perfectly portrays the gentlemanly fellow who reveals his darker side with more than a soupçon of creepiness.

Director Maggie Burrows pulls together these remarkable performances in a jam-packed 90 minutes of terrific theatre. The staging is immensely creative and illustrative and the ensemble work is top-notch. The moments of leaden silence are perfectly timed and the fantasy sequences are appropriately over the top. Burrows has a great design team too. The impressive setting by Se Hyun Oh offers a realistic hotel room with a glassed-in bath and it elegantly transforms into the fantasy locations. The scenic design is augmented by the evocative lighting by Lap Chi Chu and the original music and sound design by Jonathan Snipes. Denitsa Bliznakova’s costumes are right on the money – from the pigtails and Peter Pan collar worn by Samantha to the rough jeans and plaid shirt of Mimi.

MAN OF GOD is a hilarious jaunt that carries us to dark places and forces us to ask serious questions about young women (especially Asian American women in these times) and the world that confronts them. The ending of the play brings home that reality all too well. While we were entertained, we also were confronted with truths that will not dissipate. MAN OF GOD is a play that makes you think and it is a theatrical event not to be missed.

Directed by Maggie Burrows in association with Geffen Playhouse

MAN OF GOD runs July 5 through July 22. Performance times vary; contact box office or website for details. For tickets call the Box Office at (413) 458-3253. Check with the theatre regarding Covid restrictions.