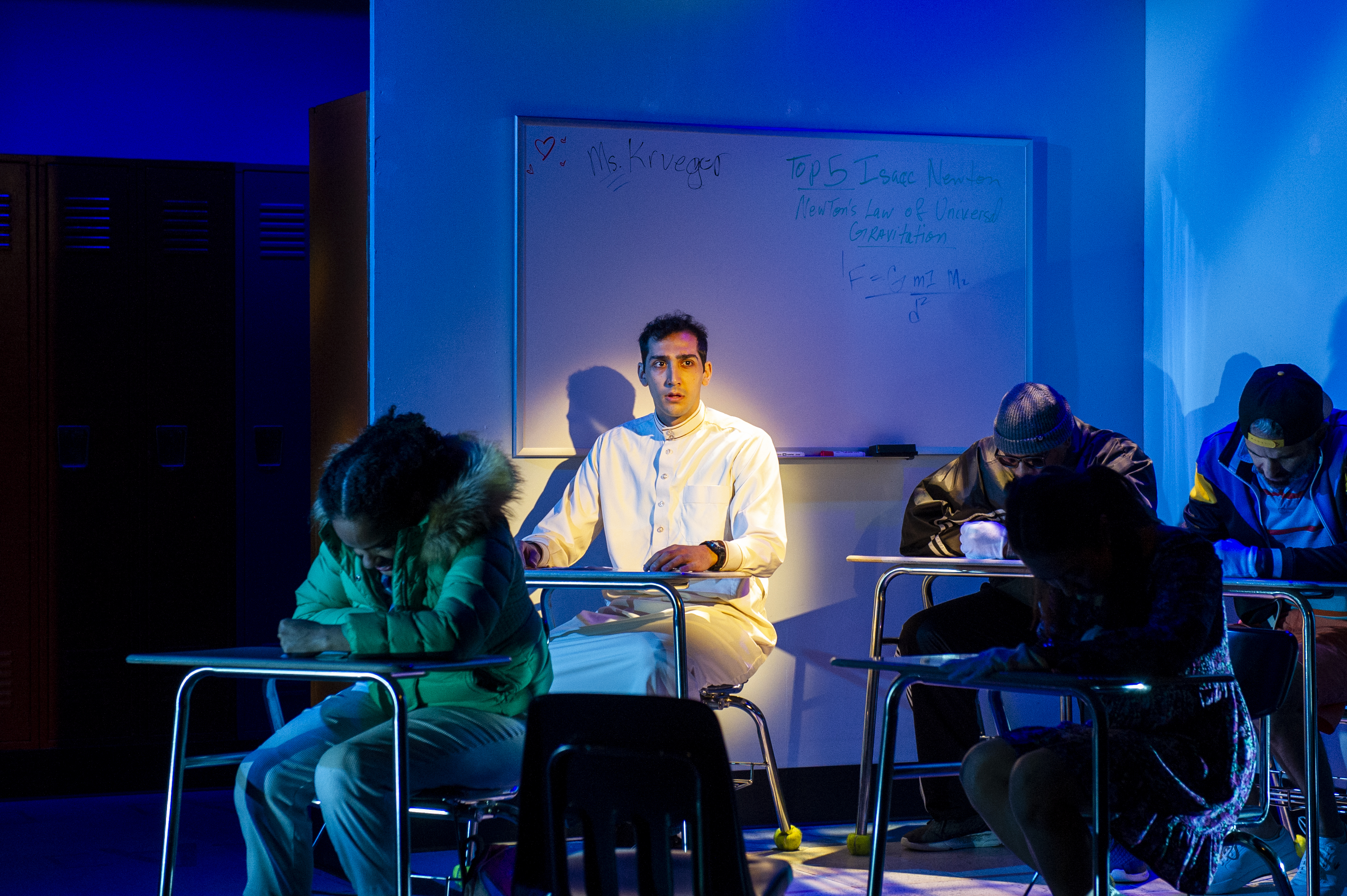 Barrington Stage Company’s ABCD is a slick World Premiere filled with a great deal of action but not much substance.   The first-ever production of playwright May Treuhaft-Ali, its subject is the failure of an educational system that encourages cheating by both teachers and students.

George Bush’s No Child Left Behind Act of 2001 established new standardized testing requirements for grades 3-8 as well as for high school students, with federally mandated consequences for schools that scored poorly on these tests.  The ABCD program includes an excerpt from Rachel Aviv’s article “Wrong Answer” in The New Yorker, claiming that “countless Black educators have been convicted and incarcerated” for changing students’ responses on standardized tests in order to prevent their schools from being shut down for lack of funding.  Citing another article, “Cheating Upwards” by Robert Kolker for New York Magazine, the program describes the cheating scandal at New York’s elite Stuyvesant High School, where a majority of white and Asian-American students feel pressure to maintain near-perfect grades in order to be accepted by Ivy League colleges.  Finally, at the exclusive Hunter College High School, which the playwright attended, a young 2010 graduation speaker refers to students of color whose applications are rejected as being “discarded like refuse. . . And we have the audacity to say they deserved it.”  After fourteen years of No Child Left Behind, the Every Student Succeeds Act, signed in 2015, ended strict reliance on standardized tests and left it to the states and their schools to establish their own assessment criteria.

Inspired by these articles and speeches, Treuhaft-Ali, according to a Berkshire Eagle interview, is “interested in forgiveness as a theme; who gets it, who doesn’t.” But the play, which takes place in two schools:  a middle school in a low-income district and an elite and highly selective high school, tries to tackle too many issues at once.  Among these are:  conflating one school’s problems with another;  exploring the roles of race, class and socio-economics in school admissions; examining the pressures faced by teachers, parents, students and administrators in deciding who gets federal funding and why; evaluating the importance of “teaching to the test” and whether students are actually learning to think for themselves.  As a result of trying to cover everything, the play doesn’t truly examine any of them, never really digging below the surface.

However, the surface in this case is unusually glossy:  Scenic Designer Baron E. Pugh provides three banks of lockers in coral and royal blue, two of which rotate as they open impressively into offices, classrooms, and even a double seat on a bus.  Composer and Sound Designer Fabian Obispo offers energetic musical transitions as the scenes alternate between middle and high school, accompanied by Jason Lynch’s lighting shifts (not to mention Lynch’s use of special effects that highlight the white latex gloves worn by the teachers as they replace wrong answers with correct ones).  Director Daniel J. Bryant speeds up the transitions, as the performers rush from one scene to another.  He re-creates the atmosphere of a school, with students racing through the halls, stopping at their lockers or checking their phones, on the way to their next classes.  Bryant cleverly transforms some of the older actors into students, joining with their younger counterparts, in order to populate the stage.  Finally, Movement Director Kevin lega Jeff, keeps this circus going, choreographing a Cheating Dance, a school dance, and a Vodka Slap Make-Out game between two tipsy students.

The actors inhabit their roles with varying degrees of success:  Melvin Abston is strong as a middle-school principal trying to save his school by persuading his faculty (several of whom are his former students) to cheat; Chavez Ravine is convincing as a high school teacher who has seen it all and will not compromise her integrity despite the pressure she faces from students and parents. Justin Ahdoot and Pearl Shin work well together though (and maybe because) they are polar opposites.  Shin can be over-the-top in her excessive portrayal of an Asian-American musical theatre major who has no compunctions about cheating, while Ahdoot, the school’s only Muslim student, has no friends, is under pressure to get into Harvard, slouches when he walks and seems to have no affect except with Shin, who is responsible for his initiation into the world of cheaters.

It is admirable that this young playwright tries to address serious problems in our schools, but these are complex questions and Treuhaft-Ali needs to narrow her focus and bring more depth to her investigation.  The production, however, makes bold and creative choices as it illuminates the world of the play.

ABCD runs from July 1-July 23 at Barrington’s St. Germain Stage.  Tickets may be purchased by calling 413-236-8888 or online at barringtonstageco.org/Tickets.