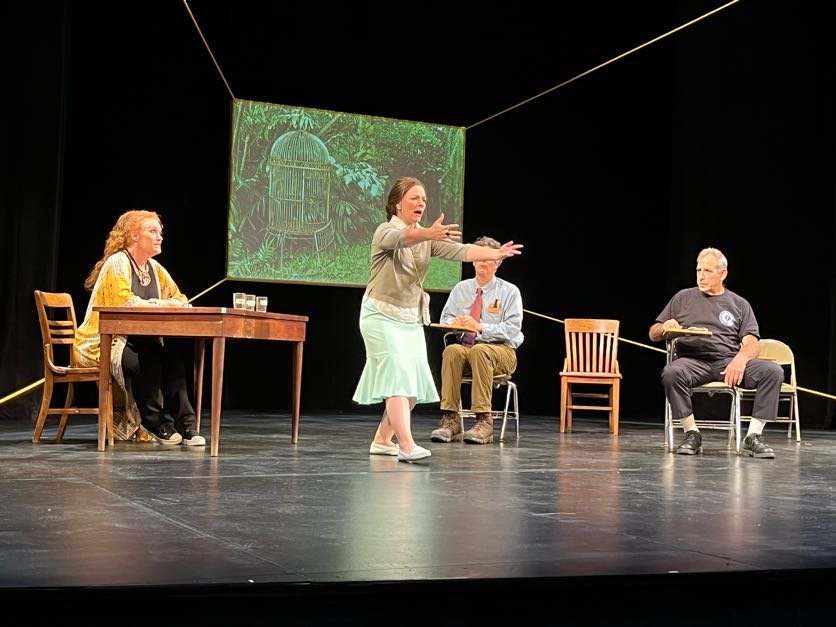 They say that the fear of public speaking is, for most people, greater than the fear of death. As such, this fear is a topic that is perfectly relatable and a great subject for comedy, as demonstrated by Mark St. Germain’s new play, PUBLIC SPEAKING 101. The world premiere of St. Germain’s comedy opened this week at the Great Barrington Public Theater as part of its second season.

The setting is a community college class where four forlorn, non-traditional students convene to meet their greatest fear. There is Sergeant Mike Gallion, who struggles with malapropisms and is the butt of jokes back at the precinct for his unsophisticated speech. Motivated by an upcoming assignment at an Easter celebration, he begrudgingly enrolls in the class. Fletcher Tuft is an expert on rocks—be they igneous, metamorphic, or sedimentary. He is a talented writer on the subject, but when his company decides to start a video blog he is discounted because of his monotonic delivery and buttoned-up personality, which are as interesting to watch as paint drying. Another classmate, Millie Harrow, is a petite and shy nerd who works in her father’s funeral home and is much more comfortable among the corpses than with real people. “At least I can put a smile on their faces,” she tells us. Although she longs for a life beyond the mortuary, she cannot broach the subject with her father and thus finds herself at the Public Speaking class. The one other student is the Reverend Montavius Lister, an articulate speaker when he can bring himself to speak, but he is so intimated by the memory of his father and grandfather (both renowned for their eloquent sermons) that he cannot speak at the pulpit but resorts to singing his sermons.

These lonely and fearful people are drawn to the class in a desperate hope to find their voice and express what has been held inside for so long. Their instructor, Sunny Strut, has just been assigned the class because the original teacher died in an unfortunate “poodle accident.” Sunny’s personality matches her name. In spite of being ill-prepared for the last-minute class, her positive attitude is inspiring. This is all the more commendable when we learn she has never taught before (she is a local community theatre star) and she is trying to hold everything together while her own world is falling apart.

Together the group pulls together, eventually learning the root cause of their anxiety and each discovers a new lease on life as they discover their own voices. Along the way we learn the value of community college, not the least of which is finding commonalities and making new friendships.

Peggy Pharr Wilson is energetic and charming as Sunny, sporting theatrical dress and gesture, she comes off as genuine in her caring for her charges and in her personal suffering. David Smilow portrays Sgt. Gallion with suitable gruffness and lumbering gait and is touching as he opens up to reveal how being a star athlete in high school failed to set him on the path to success. Rachel Burttram as Millie, Nathan Hinton as Rev. Lister, and Brendan Powers as Fletcher are at their best once the characters begin to share their real feelings. But initially their portrayals seem two-dimensional; they display the up-tight physicality and annoying vocal attributes, but seem to be playing at being afraid rather than being truly in the moment. This is primarily due to the material they are working with.

Although St. Germain’s script has many laugh-out-loud moments (he knows how to set up a laugh), the play is somewhat unformed or as suppressed as the fearful characters are. Except for the role of Sunny, the stakes are too low to really give the characters dynamic emotional arcs. All four students fear confronting specific other people (fathers, co-workers) and when they have their breakthrough moment, the confrontation is in the form of a monologue to the audience. The ending is anticlimactic and feels like an afterthought.

Jim Fragione, the director of PUBLIC SPEAKING 101 and Artistic Director of the Great Barrington Public Theater, is to be commended for bringing to the regional stage a world premiere by a significant playwright. He has pulled together a fine cast and staged the work nicely in a simple but effective setting by Jim Youngerman.  The scenic design is augmented by lovely lighting by Lara Dubin and some inspired costuming by George Veale. However, the imperfect script has limited what could be accomplished. It is hoped that the play will continue to develop in future production that would lead to a stronger ending that builds upon the new strengths the characters have gained through their class. The courage to return to the classroom and to pursue education to re-direct one’s course in life is a very noble subject and one that merits further exploration.

PUBLIC SPEAKING 101 runs July 15 through July 24th, Thursday through Saturday at 7:30 p.m. and Saturday and Sunday at 3:00 p.m. Tickets & info: greatbarringtonpublictheater.org. Box Office: 413-528-0684. Check with the theatre regarding Covid restrictions.