REVIEW: “Much Ado About Nothing” at Shakespeare & Company 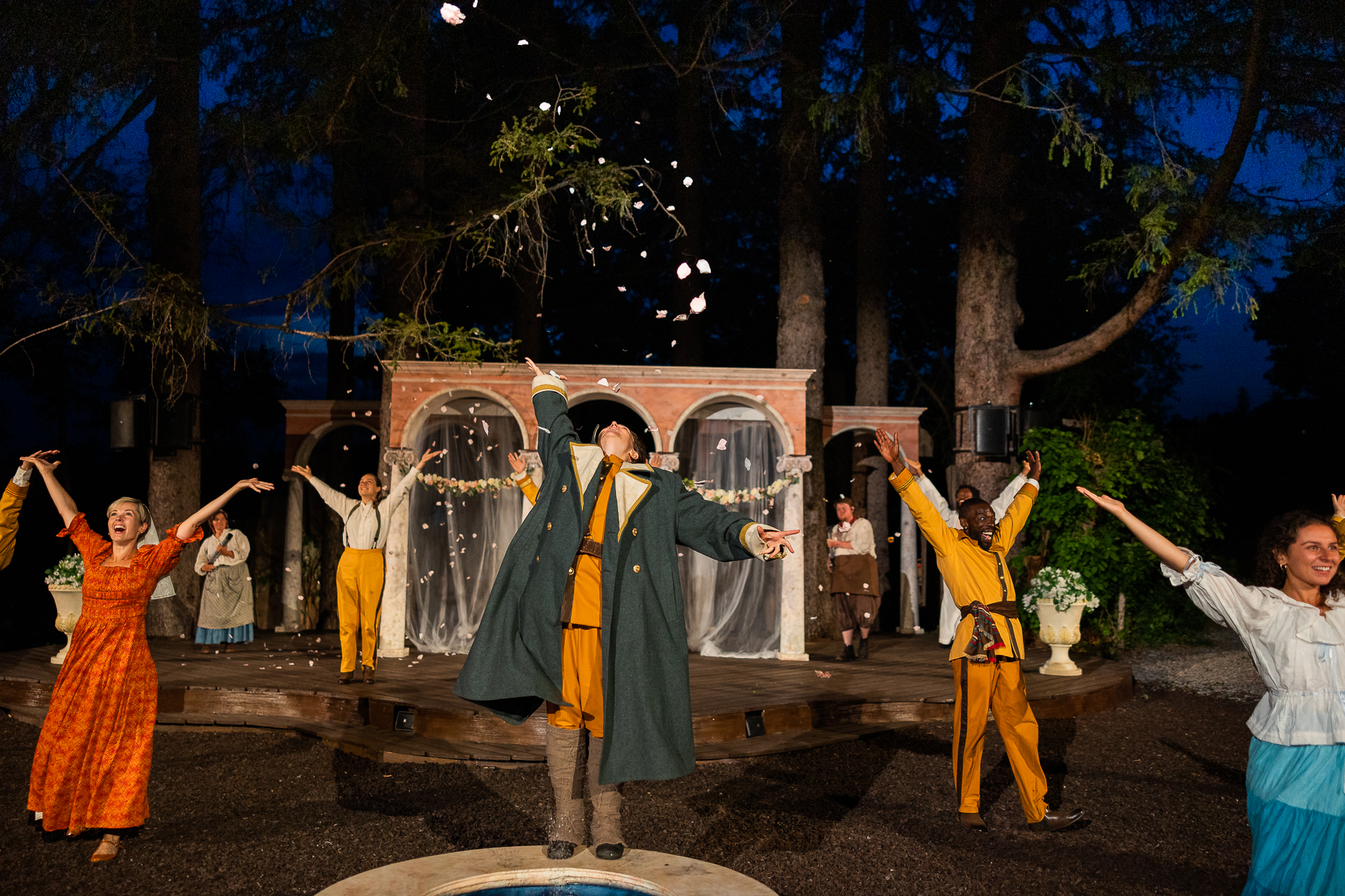 REVIEW: “Much Ado About Nothing” at Shakespeare & Company

Every once in a while a production comes along in which all of its elements coalesce perfectly, creating a whole world in which you’d like to remain long after the lights dim.  Kelly Galvin’s production of Much Ado About Nothing at Shakespeare & Company is such a one.

Written in 1599, the play features perhaps the wittiest couple found in Shakespeare:  Beatrice (Tamara Hickey) and Benedick (L. James), who cannot keep from insulting one another when they meet, though their friends all know what the couple doesn’t:  that underneath the bluster, they actually love one another.  In one of the funniest scenes in this comedy, Benedick’s friends:  Don Pedro (Jake Waid), Claudio (Gregory Boover), and Leonato (the marvelous veteran company member Nigel Gore), knowing Benedick is eavesdropping on their purposefully loud conversation, insist that Beatrice is in love with him.  Both their comic invention and James’ farcical reactions, coupled with his antic movements, are reminiscent of the Commedia dell’arte—the professional improvised Italian comedy troupes popular from the sixteenth through eighteenth centuries, whose influence is felt throughout this production (which takes place in Messina, Italy).  A bit later Beatrice’s friends play the same trick on her, as Hickey’s spunky Beatrice crawls under a bench in her attempt to pretend not to listen.

The secondary plot is much more serious:  Claudio, a soldier and young lord of Florence, falls in love with Hero (Gina Fonseca), daughter of Leonato (governor of Messina).  Don Pedro, prince of Aragon, woos her, disguised as Claudio, and arranges the marriage.  Unfortunately, Don Pedro has an evil brother, Don John, the bastard (Madeleine Rose Maggio), who is determined to destroy the union between Hero and Claudio and nearly does.  Fortunately, the clowns–Dogberry, the constable (Caroline Calkins) and assistant, lieutenant Verges (Gina Fonseca, again) uncover the villainous plot, despite their complete ineptitude.  Their interrogations of Don John’s accomplices:  Borachio (Michael F. Toomey) and Conrad (Devante Owens, who doubles as a Friar), add such fun to the play that every word, every look hits its mark.

In Shakespeare’s time boys (whose voices had not yet deepened) played women’s roles because females were not permitted onstage.  It is fascinating to see how many women are cast in male roles in this production, beginning with Calkins’ Dogberry, with her brilliant comic timing, her Napoleon-like hat and coat, and her riotous malapropisms, accompanied by Fonseca’s very old Verges, using Harlequin’s famous slapstick to bop the villains on the head.  Fonseca not only excels as a comedienne but her Hero, rather than a shrinking violet, is a woman who loudly and proudly defends her honor.  Madeleine Rose Maggio is Don Pedro’s brother (not sister); and Bella Merlin and Naire Poole double as both men and women, serious and comic.  The doubling of roles is smooth and seamless, including Claudio, who also portrays the First Watchman (another amusing clown).  The versatility of this adept cast keeps us guessing, checking our programs as we try to figure out who is who.

References to Shakespeare’s other plays abound in Much Ado About Nothing:  Don John resembles Iago in Othello, his wicked plot and its aftermath is repeated in A Winter’s Tale, the Friar’s role and advice is reminiscent of Romeo and Juliet, and there is a strong similarity between the wit and intelligence of Beatrice and that of Rosalind in As You Like It.  Yet many people are less familiar with this play than with the others—Shakespeare & Company hasn’t performed it on their main stage since 2003.

But this production has been well worth waiting for:  Sound designer Elizabeth Cahill’s music enriches every part of it, from soothing Italian guitar selections to bells chiming, to rousing dance music, transporting both the audience from scene to scene as well as the actors, who utilize nearly every nook and cranny of the New Spruce Theatre–entering and exiting via the steps of the aisles, the paths on stage right and left, and the upstage area of Leonato’s home.  Director Kelly Galvin’s pacing is extraordinary, allowing enough time for each interaction (sometimes directly with the audience), yet always surprising us with the speed of the alternation between the lovers, the clowns, and the dark plotting of the villains.  Movement director Sheila Bandyopadhyay choreographs a gorgeous masked dance, with actors dressed by Kiki Smith in elaborate and colorful costumes.  Their movements and sounds correspond to the Commedia and Carnival masks they wear, both animal and human.

Set designer Patrick Brennan’s lovely Italian villa contains graceful arches supported by Greek columns that inspire further comic business and are decorated for Hero and Claudio’s upcoming wedding by stagehands dressed as members of the household.  Also onstage is a beautifully draped table laden with fruits and other edibles, and tall plants in white pots (also fodder for these imaginative actors).  In Leonato’s garden (the large area below the stage), are two benches and a round white well that invites innumerable possibilities, featuring a fountain in its center.  Though the place is clearly defined, the time period is not.  Both the set and costumes could be contemporary (except for the golden color of the soldiers’ uniforms, with black feathered plumes on their hats).

One of the most distinguishing features of Shakespeare & Company has always been the inventiveness of its comic actors.  That’s not an easy thing to do when the jokes of Shakespeare’s time can threaten to fall flat with an audience not familiar with his words or references.  But Galvin’s enchanting production has showcased that skill once more, especially with the introduction of L. James, whose deeply resonant voice and remarkable talent enliven the New Spruce Theatre.

MUCH ADO ABOUT NOTHING runs from July 2—August 14 at Shakespeare & Company’s New Spruce Theatre.  Tickets may be purchased by calling 413-637-3353 or online at SHAKESPEARE.ORG.