REVIEW: “Anna in the Tropics” at Barrington Stage 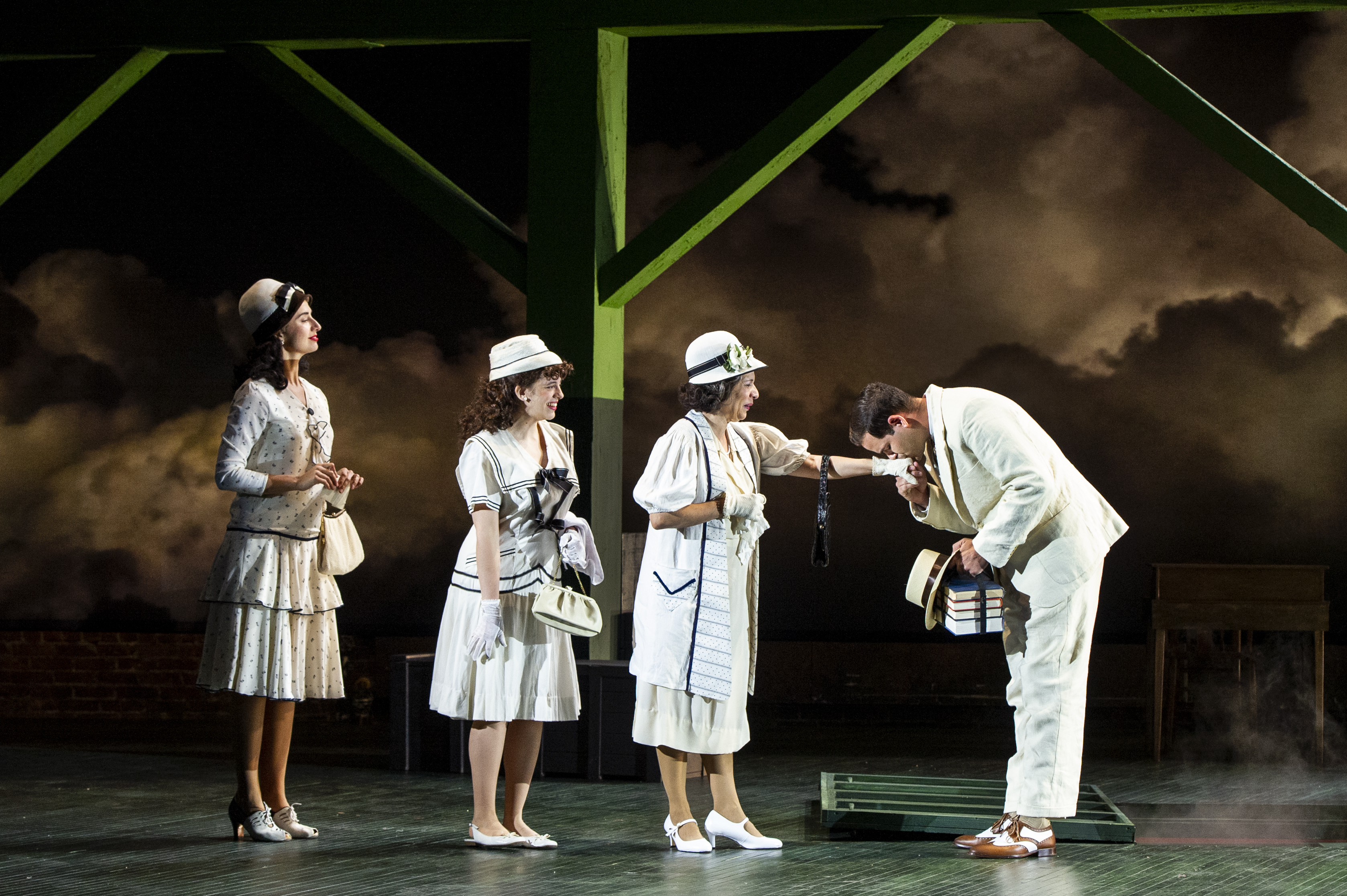 REVIEW: “Anna in the Tropics” at Barrington Stage

If you love the theater, and you haven’t yet reserved a ticket for Anna in the Tropics, I’d urge you to do so posthaste. The play ends its run at the Barrington Stage Company on July 30, and I can’t imagine that there will be many seats available.

This Pulitzer Prize-winning play by Nilo Cruz, exquisitely directed by Elena Araoz, tells of one of last remaining hand-rolled cigar factories in 1929 Tampa, Florida. The family who runs this factory continues the long-standing Cuban tradition of hiring lectors to read to the workers to alleviate the monotony of their work. As the play opens we see the rapid staggering of two scenes: in one, Santiago (Gilbert Cruz), the patriarch and owner of the small factory, and Cheché (Alexis Cruz), his half-brother, rowdily make bets on a cockfight; in the other, Santiago’s wife, Ofelia (Blanca Camacho), and her two daughters, Marela (Gabriela Saker) and Conchita (Marina Pires), wait with white handkerchiefs at a seaport, bouncing with excitement. The new lector, Juan Julián (Alex Rodriguez), is about to arrive. Playwright Cruz delivers shrewd commentary on gender differences in prosperous men and women in 1929.

Cruz’s play has so many elements of wide audience appeal, yet he fortifies Anna with an abundance of commentary and literary references. The primary focus is the Anna of the title: Tolstoy’s story of doomed love, Anna Karenina. It is this novel that Juan reads to the workers, and in doing so, ignites a series of events in the lives of this family. Cruz pays witty homage to Anton Chekhov (look for the references to The Three Sisters and to the dramatic principle of Chekhov’s gun). As the play progressed I was reminded of one of my favorite childhood playthings, the surprise ball, also known as the Christmas ball, where you carefully unravel lengths of crepe paper and little gifts (plastic charms, rubber animals, candies, and the like) drop out as you pull away at the crepe paper.

But as I mentioned, Anna in the Tropics has what I see as wide audience appeal. It is a beautifully crafted story of a family of immigrants who are proud of their roots, it is an authentic glimpse into industrial America in 1929, it’s sexy and sensual and full of humor. The entire cast is outstanding. Wilson Jermaine Heredia, who plays both Eliades, the cockfight organizer, and the larger role of Palomo, Conchita’s husband, transmits such depth of feeling that I felt as frightened as I did sympathetic. Every member of the cast embodies a distinctive, complicated human being, with passionate feeling that’s exciting as it is heart wrenching.

Costume designer Christopher Vergara and wig, hair, and makeup designer J. Jared Janas have not only been faithful to the people, place, and period, they surround each player with elegance, in rich, deep colors that are dazzling. Justin Townsend, the scenic designer, has done a masterful job in creating a set that is as pleasing to the eye as it is adaptable, and whether we’re watching a cockfight (no animals are harmed, I assure you) or observing the lector reading to the mesmerized women or observing a celebration in the warehouse, the streamlined sets thoroughly engage and transport us. María-Cristina Fusté’s lighting design enhances every nuance of the action on stage. Sound designer Nathan Leigh’s work is astonishingly good, not only with specific sound effects, but with the sumptuous Cuban music of the era.

Anna in the Tropics, now at the Boyd-Quinson Mainstage of the Barrington Stage Company, runs for two hours and 20 minutes, with one intermission.

Pricing for the 2022 summer season is $25–85 for the Boyd-Quinson Stage. Preview performance tickets for musicals are $45 and all other previews are $35. Please call the Box Office by calling 413-236-8888 or visiting barringtonstageco.org/Tickets.