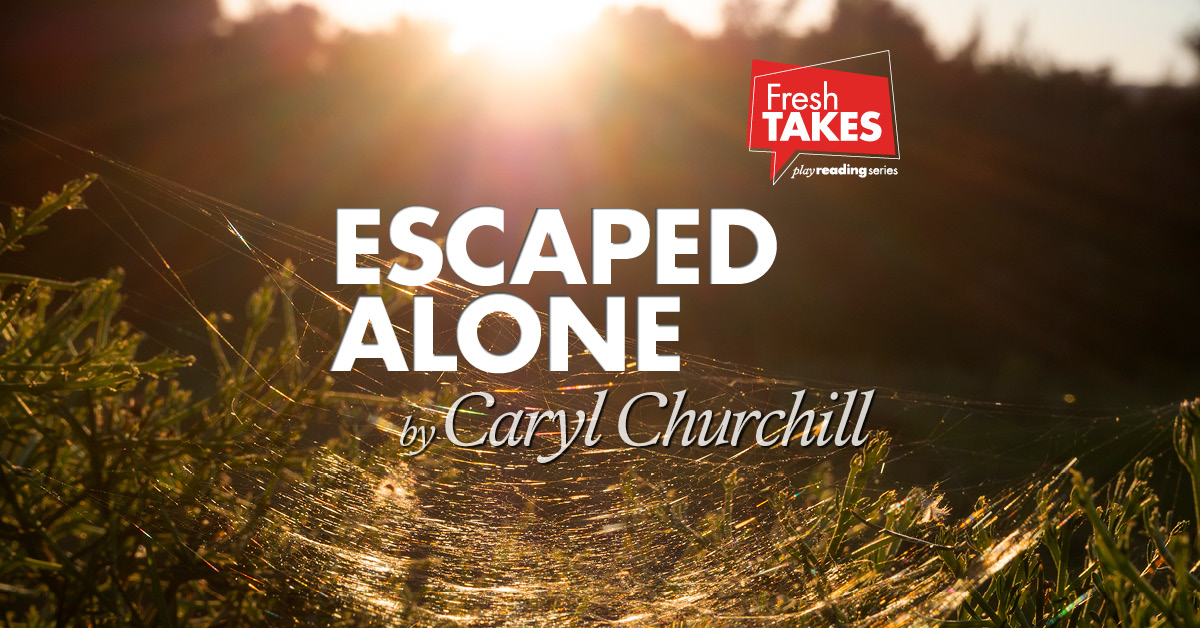 LENOX, MA (July 25, 2022) — WAM Theatre concludes their 2022 Fresh Takes Play Reading Season with Escaped Alone, written by one of the most prolific living playwrights, Caryl Churchill (Top Girls, Cloud 9, Far Away). The play is directed by WAM’s Producing Artistic Director Kristen van Ginhoven and will be presented live (and live-streamed) on Sunday, August 7, at 2pm at The Mount, Edith Wharton’s Home in Lenox. Tickets are on sale now.

“While written before this pandemic, Escaped Alone provides a resonant opportunity to use humor and absurdity to look at what’s going on in our world. If we can’t laugh at all we are facing in our inner and outer worlds, then what do we have?” explains director Kristen van Ginhoven. “I am excited to explore how one of our most esteemed contemporary female playwrights defies convention to explore how we navigate catastrophe.”

Back by popular demand, Escaped Alone, by iconic feminist playwright Caryl Churchill, brings us to a backyard where three old friends and a neighbor spend a series of summer afternoons chatting, while visions of apocalyptic horror play out inside their minds. Deemed “the most dazzlingly inventive living dramatist in the English language” by The New York Times, Churchill entwines histories, laughter, and song over tea and catastrophe.

The play presents conversation between four women around the same age as the then-77 year old Caryl Churchill.  Helmed by van Ginhoven, the WAM reading will feature an ensemble of celebrated regional actors: Mrs. J is played by Candace Barrett-Birk (Guthrie Theatre’s Romeo and Juliet, To Kill A Mockingbird, Chester Theatre’s recent Tiny Beautiful Things), who is making her WAM debut;  Joan Coombs (Emilie, Tartuffe, Tale of the Allergist’s Wife) returns to the WAM Stage to play Vi; Lena is played by Eileen Schuyler (4000 Miles, Blithe Spirit), seen at WAM as Alyssa in The Old Mezzo, and the role of Sally is played by another local actor making her WAM debut, TAMIR (Solo performer of Now and In the Land of Israel, and the title role of Medea).

Candace Barrett-Birk, who is playing the role of Mrs. J, stated that she is: “drawn particularly to this scaffolding of a play because it speaks with such grace, ease, humor and urgency about so many things that are important right now… It is about the importance of community.” Barrett-Birk, who has previously directed this play goes on to explain that: “Mostly, it is about the power of story-telling—and story-listening.  It presents the very real notion that our conversations—our stories—affect not only us and the people around us, but also the future of the world.”

WAM is excited to be once again collaborating with, and performing at The Mount, Edith Wharton’s Home in Lenox, where WAM has previously presented events with their Intergenerational Ensemble.

Tickets are now on sale for Escaped Alone by Caryl Churchill, directed by Kristen van Ginhoven at The Mount on August 7.  For more information or to reserve your tickets today, visit WAM online at wamtheatre.com or call 413.274.8122.

For more information about the 2022 Season and ways you can participate with WAM Theatre, please visit wamtheatre.com.

Eileen Schuyler (she/her) is an actor, director, and theater teacher based in New York’s capital region. WAM Theatre: Eileen is delighted to return to WAM Theatre to reprise the role of Lena in Escaped Alone. Previous WAM Theatre: Alyssa in The Old Mezzo. Selected Theatre Credits Elsewhere: Eileen has performed frequently at Capital Repertory Theatre in 4000 Miles, 33 Variations and Blithe Spirit among others; Studio Arena Theater (Greetings, Lake Effect); Fulton Opera House (Sherlock’s Secret Life); Theatre Company at Hubbard Hall (Heartbreak House); eight seasons with Stageworks/Hudson (Play by Play, A Wedding Story); Proctors Theatre; Queens Theater in the Park, Soho Rep and 25 shows with NYSTI, where she was a founding member.  Teaching/Directing: Eileen directed Our Town, The Diary of Anne Frank and The Laramie Project at Theatre Institute at Sage, where she also teaches acting. Previous teaching experience includes almost a decade at UAlbany, and as a Communications Coach for Public Defenders at the NYS Defenders Institute. Additional Artistic Credits: Artistic Director of Theater Voices, now in its 33rd season, Eileen has frequently performed and directed for the company. She wrote and directed original adaptations of Spoon River Anthology at Siena College and A BINTEL BRIEF: Letters from the Lower East Side to the Jewish Daily Forward at the Yiddish Book Center, Amherst, and the Arts Center for the Capital Region. Selected Training: Eileen received her BA from Suffolk University, and her MA at SUNY Empire State College, as well as additional training at Shakespeare & Company, HB Studios and the School for Film & Television. Awards/Memberships: An AUDIE winner, she’s a proud member of AEA and SAG/AFTRA.

Joan Coombs (she/her) is a Berkshire based actor with a long career history in Planned Parenthood and reproductive health and rights. Current role with WAM Theatre: Vi in Escaped Alone. WAM Theatre: Escaped Alone (first reading), Emilie (New England Premiere and reprise) Selected Theatre Credits Elsewhere: Pride and Prejudice (Dorset Theatre Festival), Tartuffe, Tale of the Allergist’s Wife (Shakespeare and Company), All My Sons (Hubbard Hall), Don’t Talk to the Actors, Moon Over Buffalo, The Hollow (The Theater Barn), Death of a Salesman (Curtain Call Theatre). Film: Like Lambs, Narration: Thousand Years to Wait, Kingdom of Hamelot. Creative inspiration: In her other work as a nonprofit consultant, she is inspired by her clients’ missions, and experiences their work and service as stories every bit as compelling as the stories we tell on stage. Membership/Affiliations: Actors Equity Association. Selected training: Shakespeare & Co, Michael Chekhov School. Proudest achievement: Radically reinvented herself three times, and at 60 – as an actor.

The Mount is a turn-of-the-century home, designed and built by Edith Wharton in 1902. A National Historic Landmark, today The Mount is a cultural center that celebrates the intellectual, artistic and humanitarian legacy of Edith Wharton.