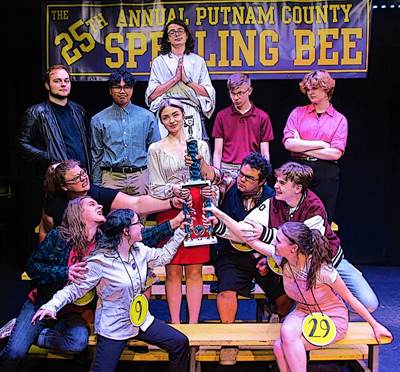 Following the enormous success of last year’s “The Addams Family Musical: Quarantine Edition”, Catskill’s Bridge Street Theatre has made the decision to turn their Summer Youth Musical an annual event! This year’s production, featuring an all-student cast and slated for a two-weekend run August 4-14, will be the Tony and Drama Desk Award-winning musical “The 25th Annual Putnam County Spelling Bee”.

With a book by Rachel Sheinkin and music and lyrics by William Finn, “Spelling Bee” tells the story of an eclectic group of sixth-graders engaged in the most cut-throat competition of their young lifetimes. These hapless tweens attempt to spell their way through a series of (potentially made-up) words, hoping against hope not to hear the soul-crushing, pout-inducing, life un-affirming “ding” of the bell that signals the fact that they’ve made a competition-ending mistake, all while sharing hilarious and touching stories of their extremely complicated personal lives. Six finalists enter – only one can come out on top! But which one will it be? A riotous roller coaster of a show (complete with audience participation!), “The 25th Annual Putnam County Spelling Bee” is guaranteed to be a crowd-pleasing comic delight!

Performances of “The 25th Annual Putnam County Spelling Bee” will take place Thursdays – Sundays, August 4-14, 2022, on Bridge Street Theatre’s “Priscilla” Mainstage, located at 44 West Bridge Street in the Village of Catskill. Eight performances only. Thursday, Friday, and Saturday performances are at 7:30pm, with Sunday matinees at 2:00pm. Thursday, August 4 and Sunday, August 7 are “Pay-What-You-Will” performances. Admission at the door is $25, Students and Children ages 18 and under are only $10. Discounted advance tickets (highly recommended) are available for $22/$10 (+ a small service fee) at bridgest.org/spelling-tickets/.

For the safety of the performers and all attendees, Bridge Street Theatre encourages patrons to remain masked during the performance. For details on BST’s current safety precautions, check the theatre’s website at bridgest.org/covid-safety-rules-at-bst/. And for more info about the show, visit bridgest.org/spelling-bee/.

Note: Many of the show’s characters are coping with typical pubescent issues and some material may not be suitable for children under the age of 12. Parental discretion is advised.

Financial assistance for production of “The 25th Annual Putnam County Spelling Bee” has been provided by Price Chopper’s Golub Foundation and a Walmart Community Grant.