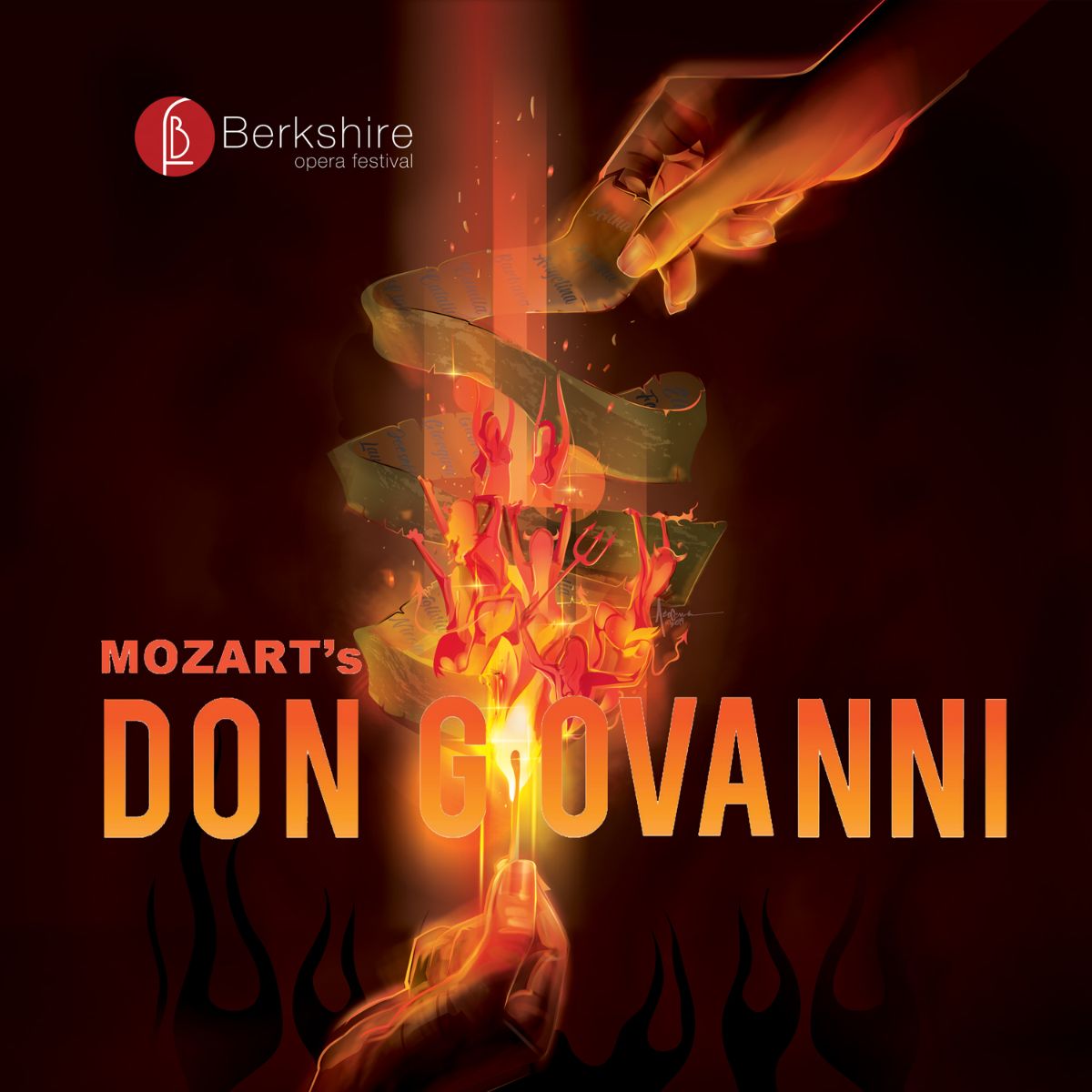 Don Giovanni, often considered to be Mozart’s greatest work, is based on the legend of Don Juan and tells the story of antihero Giovanni’s slow demise. Stage Director Jonathon Loy says: “This production of Giovanni is not defined by place or a time period. We will be forced to see inside the depths of Giovanni’s soul for what he truly is, a devastatingly flawed, lecherous man who yields great influence over his surroundings. Through the addition of dance we’ll take the journey with Giovanni as he makes his way to the depths of hell, as he tries to take everyone down with him.”

This production was originally scheduled for the 2020 fifth anniversary season, but was cancelled due to the COVID-19 pandemic. In a quick pivot, the cast collaborated on a virtual concert recorded in their homes and studios, which streamed in August 2020. The majority of this original cast returns.

André Courville makes his Berkshire Opera Festival debut in the lead role of Don Giovanni. Courville is a rising star in the opera world and has been praised by Opera News for his “splendid, lush bass-baritone.” Of Courville’s recent role in a 2019 production of Gaspare Spontini’s Fernand Cortez, Operawire said: “The American bass-baritone produced an excellent performance in the role of the High Priest of the Mexicans…His voice is powerful and authoritative. Recitatives were carefully molded and sung with an uncompromising edge. What also impressed was the beauty of voice; it has a full-bodied, rounded sound underpinned by an inviting warmth which is able to draw the listener towards him.”

Opposite Courville is Christian Zaremba in the role of Leporello. The French-American bass has been seen in recent productions of Puccini’s Tosca and Gianni Schicchi at the Metropolitan Opera, as well as in lead roles with Austin Opera. The cast also features 2019 Richard Tucker Foundation career grant recipient Laura Wilde in the role of Donna Anna, who has been hailed by Opera News for having “a ravishingly beautiful sound, [and] a fine sense of style and character.” The fast-rising British-American tenor Joshua Blue sings Don Ottavio. Opera News has raved about “Joshua Blue, whose saints-raising tenor and complete embodiment of his songs were revelatory.” Blue makes multiple role and house debuts this season, including the Metropolitan Opera as Peter in Gershwin’s Porgy and Bess, Los Angeles Opera singing the Evangelist in Bach’s St. Matthew Passion, and Opera Philadelphia as the Duke of Mantua in the Lindy Hume production of Rigoletto.

Preceding the August 20 matinee is a free pre-performance talk with dramaturg Cori Ellison at 12pm (11:45am doors) for all ticket holders. Cori is a leading creative figure in the opera world and has served as staff Dramaturg at Santa Fe Opera, the Glyndebourne Festival, and New York City Opera. She is a member of the Vocal Arts Faculty at The Juilliard School and Ravinia Steans Music Institute and has taught and lectured for schools, performance organizations, and media outlets worldwide. Cori’s supertitles have been seen in all BOF mainstage productions since Madama Butterfly in 2016.

Opera News praises Garman’s conducting & casting after last year’s Falstaff:
“Berkshire Opera’s Falstaff at the Mahaiwe Theater was terrific, reminding a fully vaccinated, masked audience of why we attend opera in the first place. Artistic director Brian Garman led an impressive forty-piece orchestra through a propulsive reading of Verdi’s ingenious, tricky score. I have rarely if ever heard such an aptly balanced Falstaff cast, with no weaknesses.”

And featuring the Berkshire Opera Festival Orchestra and Chorus

Berkshire Opera Festival (BOF) is a fully-producing summer festival founded by Jonathon Loy and Brian Garman which presented its first season in 2016. The mission of Berkshire Opera Festival is to entertain and enrich the lives of people of all ages and backgrounds throughout the Berkshire region by providing accessible and affordable performances of a broad range of operas with the highest artistic standards. Each summer, BOF presents musically and dramatically compelling operatic productions, in addition to recitals and other related musical events. Recent productions include Verdi’s Falstaff, Tom Cipullo’s Glory Denied, Puccini’s Madama Butterfly, Strauss’s Ariadne auf Naxos, Verdi’s Rigoletto, and Donizetti’s Don Pasquale.

Garman and Loy have been friends for over 20 years since their early career days at Pittsburgh Opera, with combined experience at the Metropolitan Opera, Santa Fe Opera, Seattle Opera, and New York City Opera. Loy has deep family ties in the Berkshires, and the Iowa-born Garman credits Loy for convincing him to take root in the bucolic Berkshires, finding the area revelatory in its beauty and depth of culture. In September 2019, Abigail Rollins joined the leadership of BOF in the role of Executive Director, helping Loy and Garman realize their dream and build on it year by year, carefully and with purpose.