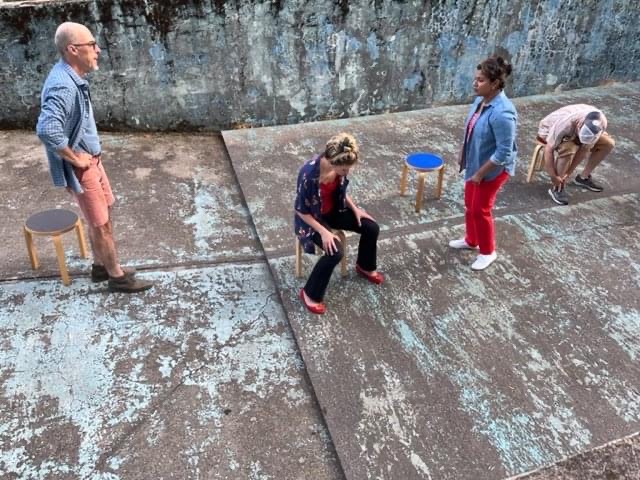 Nick Payne’s “Constellations,” currently being staged by Living Room Theatre in North Bennington, Vermont, was written to be played by two actors working through the relationship of physicist Marianne and beekeeper Roland. LRT utilizes six actors (three for each part), which might be confusing in any other play but this one.

A central point is the concept of parallel universes and how any and every circumstance there is could play out multiple times with multiple possibilities, and many of the scenes are replayed several times with different outcomes. With that in mind, having numerous actors portray the two characters works perfectly and is not at all confusing thanks to the organizational skills of director Kirk Jackson, who moves his actors deftly around the swimming pool. Yes — a swimming pool. LRT has set its production in the unused swimming pool on the grounds of the Park-McCullough Historic Governor’s Mansion, which allows for an intriguing and unusual vantage point while furthering LRT’s mission of producing innovative performances that invite the audience to develop personal connections to the material.

The actors are costumed in similar clothing that varies slightly in style and color, giving yet more credence to the idea that anything could and might happen to these characters under infinite probability. Choreographer Randolyn Zinn, who also portrays one of the Mariannes, has placed echoes of waltzing in the characters’ movements throughout the production so that when Roland and Marianne meet up at a ballroom dance class, a deja vu-type revelation of multiple possibilities is extremely palpable.

The completeness of the experience is worth noting: The swimming pool is not immediately visible upon arrival at the beautiful grounds; and the short, peaceful walk that ends in the discovery of an unconventional set is the start of the notion of myriad possibilities. This is a fascinating play made even more so by LRT’s perceptive staging and attention to detail.

“Constellations” runs through Saturday, Aug. 6, and is staged by Living Room Theatre on the campus of the Park-McCullough Historic Governor’s Mansion, 1 Park St., North Bennington, Vermont. For tickets and more information, go online or call (802) 442-5322. http://www.lrtvt.org/