REVIEW: “Guys and Dolls” at the Sharon Playhouse 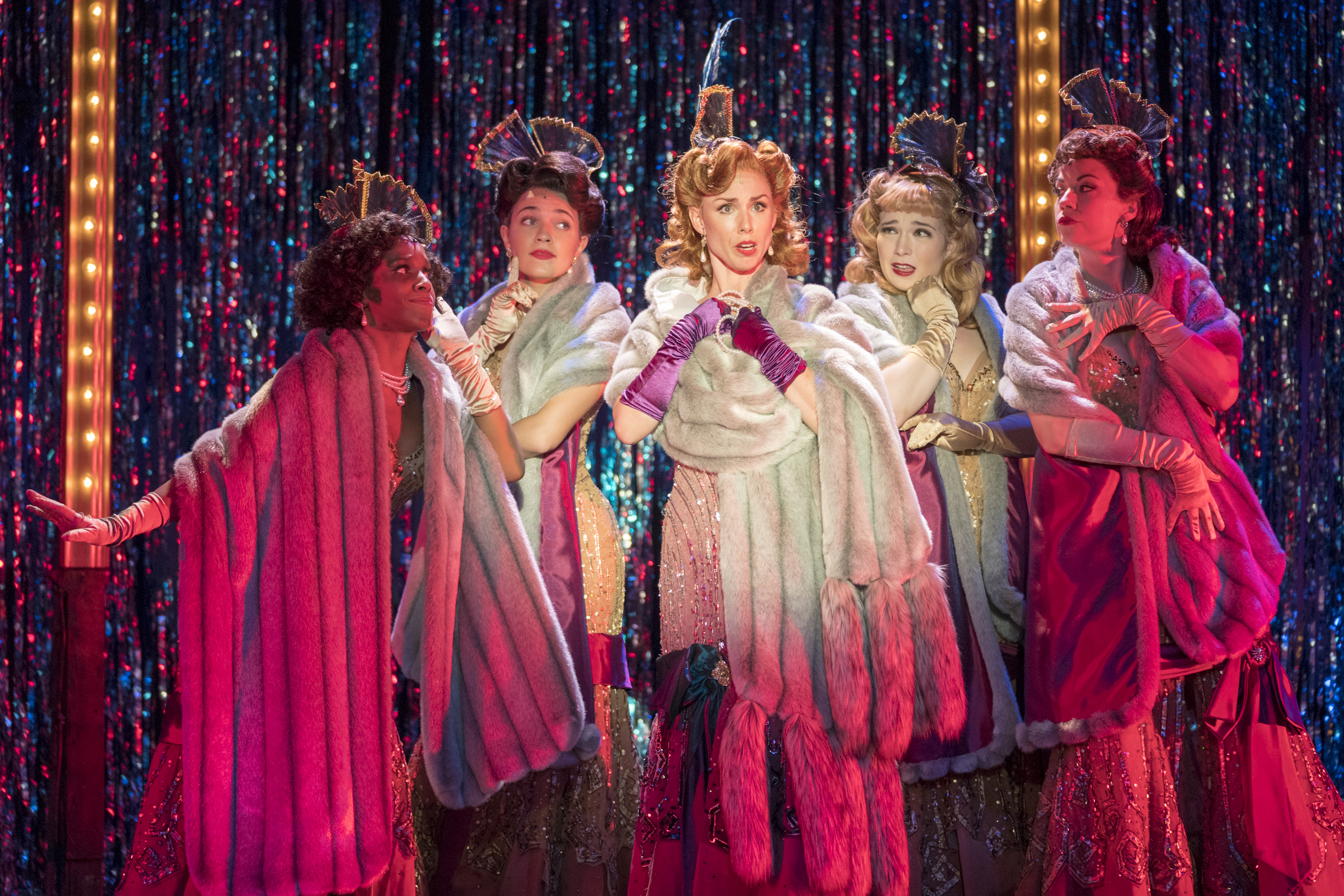 REVIEW: “Guys and Dolls” at the Sharon Playhouse

There was a tremendous joy and a celebratory air at the July 29 opening of GUYS AND DOLLS at the Sharon Playhouse in Sharon, Connecticut. This was the Playhouse’s first fully-produced show in three years. In coming back after the COVID pandemic, the Playhouse side-stepped the one-to-three character shows so prevalent on our stages this summer. Instead, they pulled out all the stops and the audience was ecstatic. With a sterling cast of 18 “triple threat” performers (yes, they can act, sing, and tap dance like crazy), GUYS AND DOLLS was a thrilling, entertaining evening.

GUYS AND DOLLS premiered on Broadway in 1950, the same year the Sharon Playhouse began operations. This Broadway musical, as directed by the incomparable George S. Kaufman, was box office magic, running 1200 performances and garnering the Tony Award for Best Musical. Frequently revived on Broadway and in London’s West End, the musical was made into a popular film in 1955. Author Damon Runyon was so renowned for his Prohibition Era, New York City characters that they created an adjective for them: “Runyonesque.” A short story writer and newspaper man, Runyon’s stories were filled with gamblers, hustlers, “dolls,” and gangsters who spoke in a distinctive and colorful patois of the backstreets of the city.

GUYS AND DOLLS is a pastiche of several Runyon stories and characters. Set in the 1940’s the opening scene captures the hurly-burly of the New York streets. In the clever patter song, “Fugue for Tinhorns,” we meet a trio of gamblers, Nicely-Nicely Johnson, Rusty Charlie, and Benny Southstreet planning their bets on a horserace. They are interrupted by a small band from the Save-the-Soul Mission, drumming up sinners for their pious cause. The leader, the prim and proper Miss Sarah Brown, fails to recruit, but does not go unnoticed. The plot thickens immediately as the gamblers explain that their employer Nathan Detroit is unable to find a place for their illegal floating crap game. He is in need of $1000 to secure the Biltmore Garage, but he is down on his luck. When Sky Masterson, a high roller, comes on the scene, Nathan conives to get the money by making a bet with Masterson. Sky has to get a woman to go with him to dinner on a day trip to Havana and Nathan chooses Sarah Brown as that date.

The story that evolves is a double romance. Sky pursues the bet, promising Sarah he can bring in a “dozen genuine sinners” to the mission if she will go to dinner with him. A resolute gambler, he soon falls hopelessly in love with her. The second romance is between Nathan and Adelaide, a sexy performer at the Hot Box Night Club. Engaged for 14 years, Adelaide is as desperate to get that ring on her finger as Nathan is to avoid the trap of matrimony. They love each other, but he is not ready to give up his nefarious life as a gambler.

GUYS AND DOLLS is now in its seventh decade and it is truly a classic American musical. Loesser’s score is full of rousing group numbers which are further enhanced by the many lively tap dance routines. The night club show with “Bushel and a Peck” and “Take Back Your Mink” are humorous and a feast for the eye and ear. While it may no longer be appropriate to refer to women as “dolls” or endorse their decision to “Marry the Man Today” and change him later, the sheer zest and buoyant comedy makes it all still work.

Justin Boccitto is the masterful director and choreographer of this delightful show. He has brought together a crackerjack cast and fills the stage with energy and colorful characters.

Lauralyn McClelland is perfection as the gorgeous, long-suffering Adelaide. Her rendition of “Adelaide’s Lament” is spot on—she doesn’t miss a single nuance of Nathan’s “doll.” McClelland is well-matched by Amanda Lea LaVergne’s virtuoso portrayal of Sarah Brown. Both actresses have divine voices, stop-you-in-your-tracks beauty, and consummate acting skills. As Sarah, LaVergne particularly shines in the Havana scene where, tipsy for the first time in her life, she lets down her guard, singing “If I Were a Bell” with gusto and charm. She avoids being too saccharine or prim and fully embraces her feelings, making her character’s development all the more believable. And wait until you see them together in “Marry the Man Today” – they will amaze you.

The casting of the male leads is a bit of a surprise (especially if your only reference for the show is the film with Marlon Brando and Frank Sinatra). Robert Anthony Jones’ rendition of Nathan Detroit brings to mind Jackie Gleason. He is sloppy and scruffy and also endlessly funny—in fact closer to the Nathan originally envisioned in the Broadway script. He drives the plot with incredible zeal and he commands the stage every minute he is on it. C.K. Edwards brings a dapper grace to the role of Sky Masterson. His earnestness makes us believe he will successfully win the heart of Sarah. He handles the ballad “My Time of Day” very well and shines in the dance and song of “Luck Be a Lady Tonight.”

The entire ensemble is well-cast and they excel in their choral work and choreography. Joshua Spencer stands out as Nicely-Nicely in his roaring “Sit Down, You’re Rockin’ the Boat” and Dom Giovanni, who delights as Benny Southstreet, has grand comic timing and elan. Overall, the musical direction is extremely fine and the sound well-balanced. Jacob Carll is the conductor and on piano in an 8-member orchestra par excellence. Brian Allan Hobbs is credited with new orchestrations and they are splendid. They also look great in the top-notch period costumes by Michael Bottari and Ronald Case and the wonderful wigs designed by Kurt Alger.

So, what’s not to like? This is a totally fun and entertaining evening of theatre and not to be missed. The Sharon Playhouse is to be commended for stepping back into production with a big, brassy, American classic.

Book: Jo Swerling and Abe Burrows based on stories and characters of Damon Runyon

GUYS AND DOLLS runs July 29 through August 14th. Evening performances Thursday through Saturday at 8 p.m. Saturday matinee at 2 p.m. and Sunday matinee at 3pm. For tickets call 860-364-7469 (ext. 200 & 201). Check with the theatre regarding Covid restrictions.