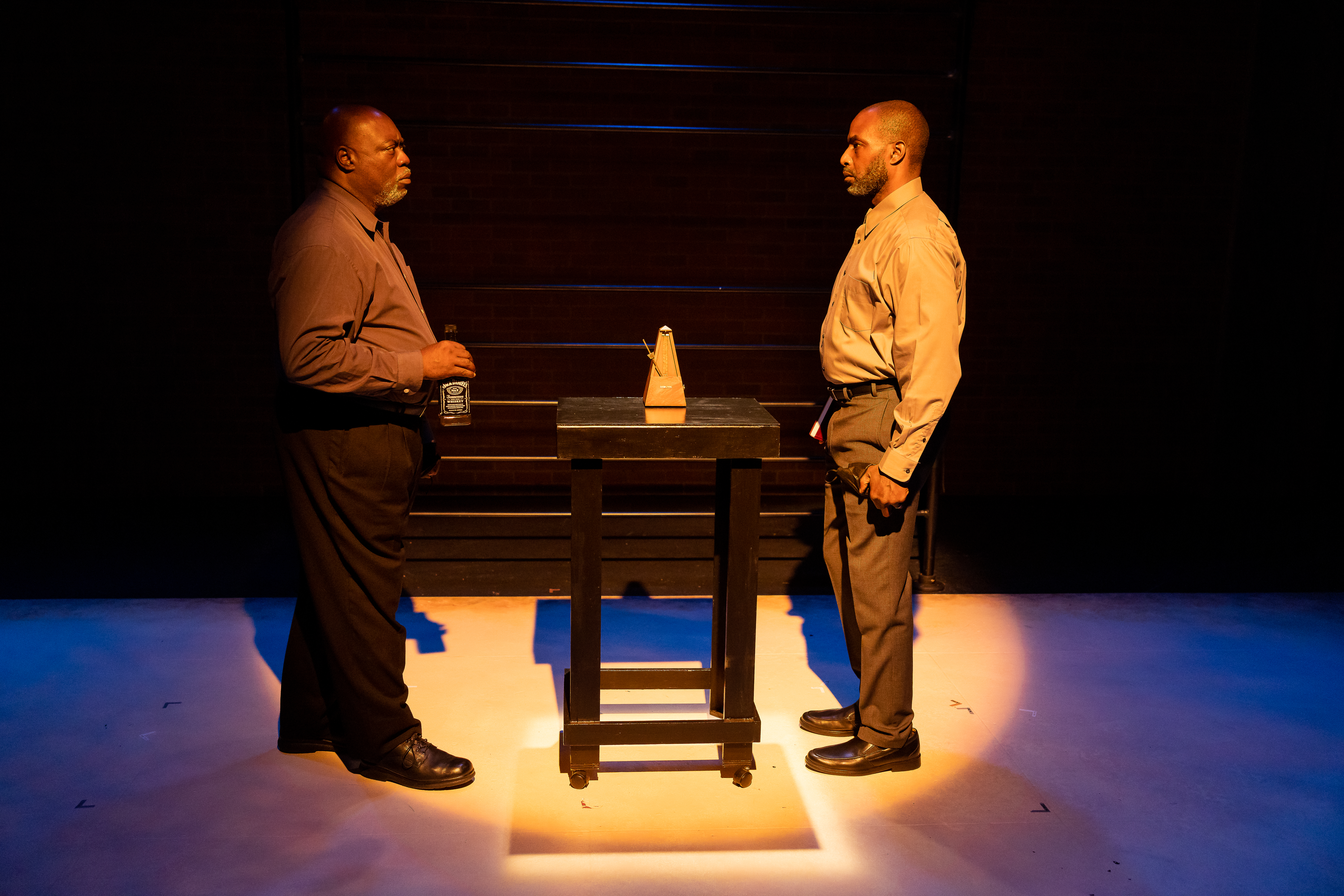 The Shakespeare & Company production of Hymn by Lolita Chakrabarti feels like two actors and a director searching for a plot.  Overstuffed with music, singing, dancing, boxing, changes of costume, set pieces and props (not to mention a ticking metronome) to help fill the 95 minutes, the play contains only a few significant events and those are derivative of other, better plays.

Chakrabarti, a British stage and screen actress and writer (married to the British actor Adrian Lester [The Lehman Trilogy]), also wrote Red Velvet, produced in 2015 at Shakespeare & Company.  Starring John Douglas Thompson, this fascinating historical play is about Ira Aldridge, a nineteenth-century African-American actor who faced much opposition when he replaced an ailing Edmund Kean on the London stage in Othello.

An interesting writer who has a way with words, Chakrabarti does well when she has a story to tell.  Unfortunately, that is not the case with Hymn, which is about a developing friendship between two black men in Lafayette Park, Detroit.  They meet at a funeral, learn that they are related, and get to know each other and their families over the course of a year, during which they plan to go into business together.  Nothing propels the play forward and the abrupt, contrived ending resembles that of a TV movie.  Plays with similar themes include Arthur Miller’s Ride Down Mount Morgan, which brings a man’s two wives (and children) together at a hospital, neither of whom were aware of each other’s existence before this man was involved in a terrible car accident.  Another is Lorraine Hansberry’s Raisin in the Sun, specifically one of its most affecting scenes:  the moment when Walter Lee Younger realizes he has been swindled out of all the money he has in the world—an inheritance from his dead father—which he has invested in a non-existent store.

The talented director, Regge Life, and his capable cast, crew, and designers work hard to bring Hymn from page to stage at The Elayne P. Bernstein Theatre.  Mr. Life directed wonderful productions of Hang last year at Shakespeare & Company and Topdog/Underdog in 2019.  His sensitive handling of the relationship of the two characters in Hymn and the way he encourages the actors to find common ground between them reveals his and his cast’s dedication to the material.

The first time we hear from Benny (the actor “ranney,” seen last season in Art), he is drunk and has been thrown out of a pub, cursing and screaming.  But in this play first impressions turn out to be wrong:  Benny, brought up by a single Mom who was sometimes hospitalized, causing her son to spend time “in care,” got control of his life with the help of his wife.  He went to AA, saw a therapist, has held a steady job for thirty-three years, recently managed to buy a home for his wife and kids and even save some money.  He’s smart, funny, a devoted son and father, and a solid, likable, reliable guy.  “ranney” ‘s performance is beautifully layered, truthful from beginning to end as he brings us from our first negative interaction with him through his final, moving monologue.  Gil (Kevin Craig West), one of four children whose Dad rose to be a prosperous tailor, went to a prep school and then college along with his three siblings, all of whom lived very comfortably. Yet, in his own words: “I’m not the big man, never have been.   I am the shooter of blanks, the one who can’t, the one no one trusts with anything.  Forever the fool and playing it cool.”  West is not as successful in portraying Gil, perhaps because his character is not as sympathetic.

The usually gifted set designer Juliana Von Haubrich has very little to do here—the stage is bare at first except for three props which will become part of the characters’ lives:  a half bottle of whiskey, a Bible, and that metronome.  What does its ticking mean?  Because the friendship of these two men began so late in their lives, time is not on their side:  a heavy-handed symbol of Tempus fugit.  Following the opening of the play, stagehands bring set pieces and props in and out of every scene, accompanied by energetic jazz and rap musical selections (Brendon F Doyle, Sound Designer).  But the music within the play is more meaningful:  Lean on Me, for example.  The repeated sequence (moving pieces/ music) becomes tedious after a while and takes up time that could have been used for further development of the story and perhaps even the introduction of additional characters, about whom we hear so much.  Costume Designer Amie Jay not only designs fitting costumes for each scene but also prop costumes (which can be outrageous and fun).  Two choreographers contribute to the variety of movement in Hymn: Kevin G. Coleman (fight choreographer) and Sheila Bandyopadhyay (choreographer).  Finally, Katie Ward’s lighting design helps to establish each season, and even extends to special effects like strobe lights.

Hopefully Shakespeare & Company’s deep bench will have additional opportunities to use their considerable skills in service of more worthy plays.

HYMN runs from July 22—August 28 at Shakespeare & Company’s Elayne P. Bernstein Theatre.  Tickets may be purchased by calling 413-637-3353 or online at SHAKESPEARE.ORG.