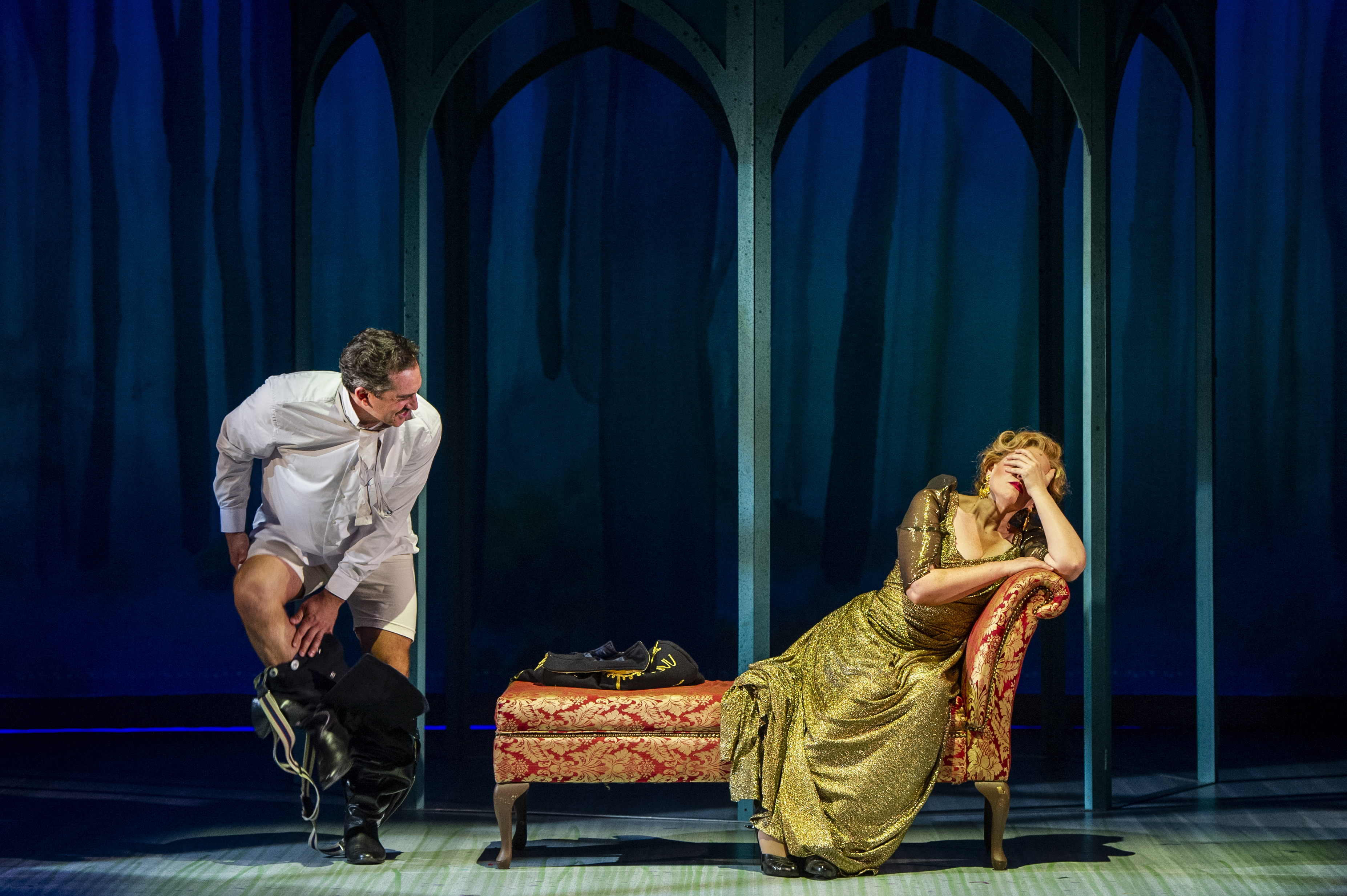 In directing her final show as Barrington Stage Company Artistic Director, Julianne Boyd has created a resplendent, mesmerizing event, a magnificent achievement. Lest I oversaturate this review with superlatives, let me explain.

Set in Sweden at the turn of the 20th Century, A Little Night Music (inspired by a charming 1955 Ingmar Bergman film, Smiles of a Summer Night) tells of the romantic entanglements of several couples. Most of the music is written in waltz time, and with the exception of the songs assigned to one main character, the score is operatic and unusually demanding of singers.

Boyd has chosen her cast well. The show opens with a quintet who serve as a Greek chorus of sorts, and their vocalizations soon become an overture. All five actors (Adam Richardson as Mr Lindquist, Rebecca Pitcher as Mrs. Nordstrom, Stephanie Bacastow as Mrs. Anderssen, Andrew Marks Maughan as Mr. Erlanson, and Leslie Jackson as Mrs Segstrom) appear throughout the play with musical commentary. They all have lustrous voices and move with exceeding grace. The glittering jewel tones of their costumes, designed by Sara Jean Tosetti, compliment the elegant colors of Yoon Bae’s stunning and efficient set constructed so the cast can quickly convert an arch to a gazebo to a dining room.

As the rich, elderly grandmother, Madame Armfeldt, Mary Beth Peil exudes droll common sense and a salty wit. She makes no pretense about the source of her wealth (she’s a former courtesan); in fact she’s the most direct character in the play, and the wisest. Peil has great presence on the stage, and for all of the surrounding entanglements, I found myself drawn to Peil every time she entered. As her 13-year-old granddaughter Fredrika, Kate Day Magocsi delivers an impeccable performance. Sober and observant beyond her years, Magocsi’s Fredrika, though charming and poised, is still a child, and the actress manages to live within all facets.

Noah Wolfe’s Henrik Egerman, a despondent seminarian, is at turns melancholy and sweetly amusing, which is exactly what is necessary to make the plot twists believable. How Wolfe manages to gauge the space between bathos and genuine yearning is a joy to behold. His stepmother of less than a year, Anne (Sabina Collazo), is at 18 only a year younger than he. Collazo’s lovely voice and her young beauty fit the role nicely. While she successfully embodies the immaturity and playfulness of Anne, I would have preferred to have more of a sense of the rest of Anne. She is, after all, still a virgin after 11 months of marriage to Henrik’s father; surely she must harbor some fear and confusion, but the lovely Collazo is almost always giggly, silly, and a bit of a dunderhead.

Fredrik Egerman, played by the splendid Jason Danieley, embodies the hopeful regret of a middle-aged man who truly wants to love his young wife, yet cannot dismiss his longing for the woman with whom he had a passionate affair oh, about 14 years before. When he learns that his former lover, a once-famous actress named Desiree Armfeldt (Emily Skinner), is in a touring company that’s performing nearby, he decides to take Anne out for an evening at the theater.

Emily Skinner is breathtakingly good as Desiree: a beautiful, self-possessed woman who, despite her shimmering gowns and her spectacular singing voice, is not at all deterred by what others think, is earthy and passionate. It’s not difficult to understand the depth of feeling she and Fredrick have for each other.

As Anne’s maid, Petra, Sophie Mings is lusty and adventurous. She brings a layer of humor and self-awareness that enhance the role beyond other Petras I’ve seen, and her performance is a delight. Also delightful and perfectly cast are Cooper Grodin as Count Carl-Magnus Malcolm, and Sierra Boggess as Countess Charlotte Malcolm. The Count is Desiree’s current lover, and Grodin’s cocky posturing and over-the-top chivalry, we soon learn, mask his vulnerability. As his barely tolerent wife, Boggess is an alluring, scheming stitch. Both are great fun.

Julianne Boyd could not have directed a finer show to mark her 28 years as Artistic Director of the Barrington Stage Company. I’m grateful for the opportunity to see such exquisite work.

A Little Night Music, presented at the Boyd-Quinson Stage of the Barrington Stage Company, with music and lyrics by Stephen Sondheim and book by Hugh Wheeler, directed by Julianne Boyd and choreographed by Robert La Fosse, runs through August 28, 2022. The show runs two hours and 40 minutes with intermission.