REVIEW: “To the Moon and Back” at the Chester Theatre Company 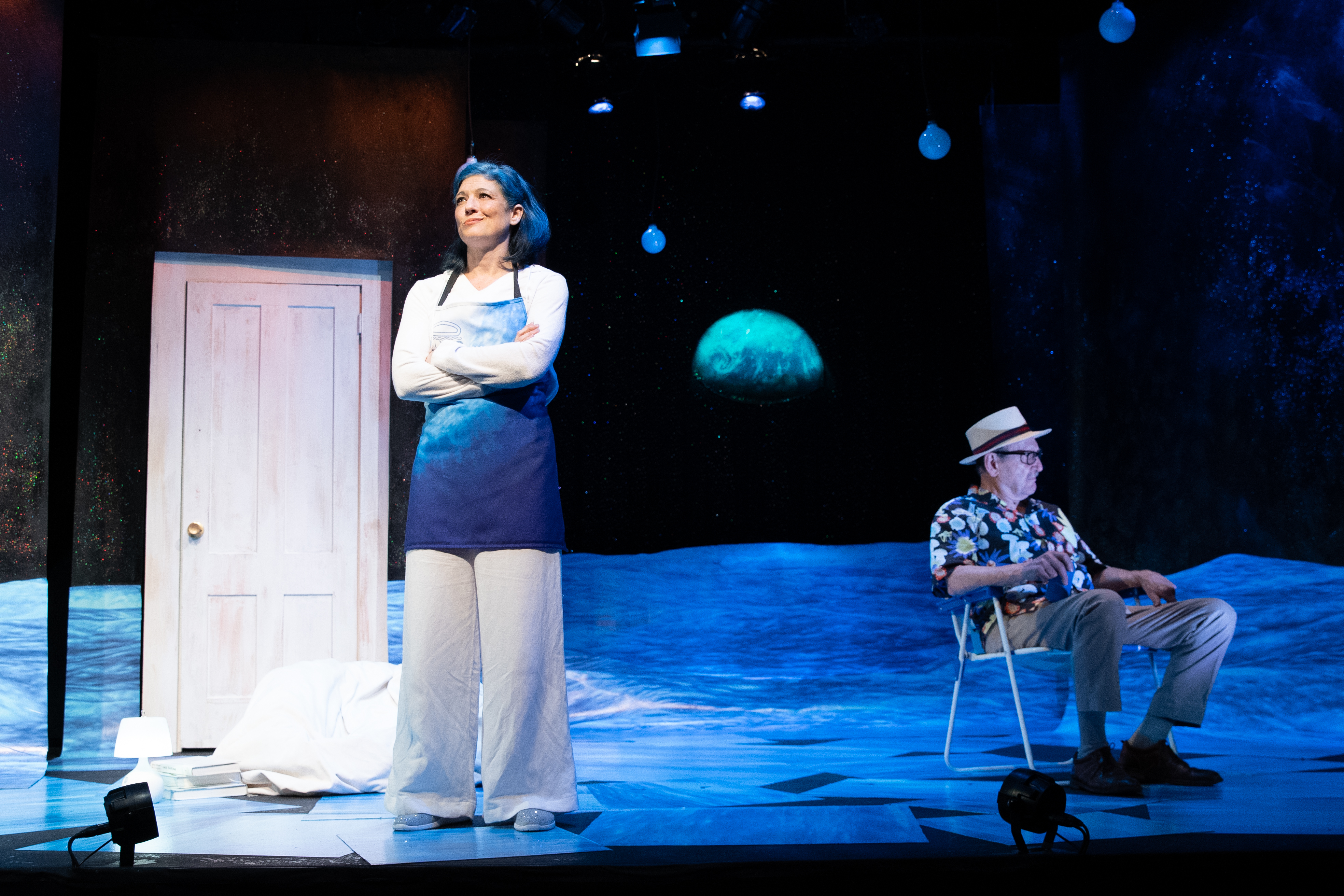 REVIEW: “To the Moon and Back” at the Chester Theatre Company

Chester Theatre Company’s mission statement includes two important goals:  offering audiences “fresh perspectives on vital issues” and developing and supporting new work.  Responding to this, along came Fran Henry, founder of a thirty-year-old organization called Stop It Now!, devoted to preventing “the sexual abuse of  children by mobilizing adults, families, and communities through direct support, information and resources to take actions that protect children before they are harmed.”  When she offered to commission and sponsor an original play about this issue, Producing Artistic Director Daniel Elihu Kramer, true to his mission, jumped into action in 2019 to find a playwright who would create such a work.  The result is To the Moon and Back, a World Premiere by Darcy Parker Bruce.

In a recent interview the playwright points out that during the pandemic the first script was discarded and replaced with a second script that would “play more with fantasy and the relationship” between a child and her abusive father. Which brings us to the moon, the setting of To the Moon and Back.  Scenic Designer Travis George has created a beautiful blue and white moonscape, complete with glittering walls, craters, lawn chairs, a view of the earth in the distance, hanging globes that blink, multiple exits and entrances, including a scary shaking door, and several TVs.  All of this is gloriously illuminated by Lighting Designer Lara Dubin accompanied by the sounds of meteor showers and the original music of Nathan Leigh.  Fantasy, indeed!

Why the moon and how does it connect with Ms. Henry’s organization?  Ace (Tara Franklin) opens the play with a monologue to the audience indicating that  something is seriously wrong.  She needs us to listen to her—no one has heard her for so long because she was unable to find the words.  We are asked to help Ace find what she is seeking:  a miracle, a home, because “people who have been through terrible things” lose parts of themselves and need to search for the missing pieces.  With the support of her kind and caring co-worker RJ (Pauli Pontrelli) at Luna Burger back on earth, Ace gains the courage to confront her father, Major (Raye Birk).  Major has been entreating his daughter to help him prepare for his role as a contestant on a game show by asking him questions.  He certainly didn’t expect these:  “Why did you sit on my bed?” and “Why did you touch me?” Only if her father acknowledges what he did wrong can Ace find the miracle and begin the process of healing.  Only then can she attempt to separate her imagination from the reality of the trauma she suffered and admit that “Everything on the moon is made up because I made it up.”

The performances of the three actors are spot on.  Though the playwright doesn’t specify the ages of the characters, it takes some time to get used to Franklin playing the childlike Ace.  But after a while, it’s difficult to imagine a younger actor being able to handle the heartbreaking struggle this character is going through.  Pontrelli, dressed by Costume Designer Charles Schoonmaker in bright warm colors, compared to Franklin’s cool, blue-tinged, colorless outfit, effortlessly provides a sort of soothing cushion around Ace, protecting and bolstering her shattered ego.  It is hard to forgive Birk’s Major but each time he urges Ace to call him “Dad,” knowing she never will, and each time he talks about winning the game show so he can have a house, a family, and a white picket fence, we realize he is aware that he has destroyed the family he was given.  Director Keira Naughton and her cast, working with Darcy Parker Bruce, has plumbed the depths of the material, causing the script to change every day.  To be a part of its development must have been exciting, frustrating, and finally an honor.

Who is the intended audience for this play?  Running only an hour (including Kramer’s opening speech) To the Moon and Back seems too short to be one of the theatre’s season offerings, even with an interesting half-hour talkback.  Could this play be shown by therapists to older teenagers and adults who have suffered trauma as children? There are many moments when it seems to be aiming at young people:  references to Peter Pan and to The Wizard of Oz (the search for home), the way Franklin’s Ace interacts with the audience by asking them questions and providing what she thinks are their answers and subsequent questions, there is humor (characters are always eating moonpies; the moon cannot be made of cheese because Ace is lactose intolerant), and the dazzling special effects.

As this play continues on its journey, we should give credit to Daniel Elihu Kramer and Chester Theatre Company for providing an environment allowing it to grow and develop, to Fran Henry who began and financed much of the process, and to Darcy Parker Bruce who is willing to keep working until the script hits “the right notes.”

TO THE MOON AND BACK runs from August 11—August 21 at Chester Theatre Company.  Tickets may be purchased by calling 413-354-7771 or online at www.chestertheatre.org.