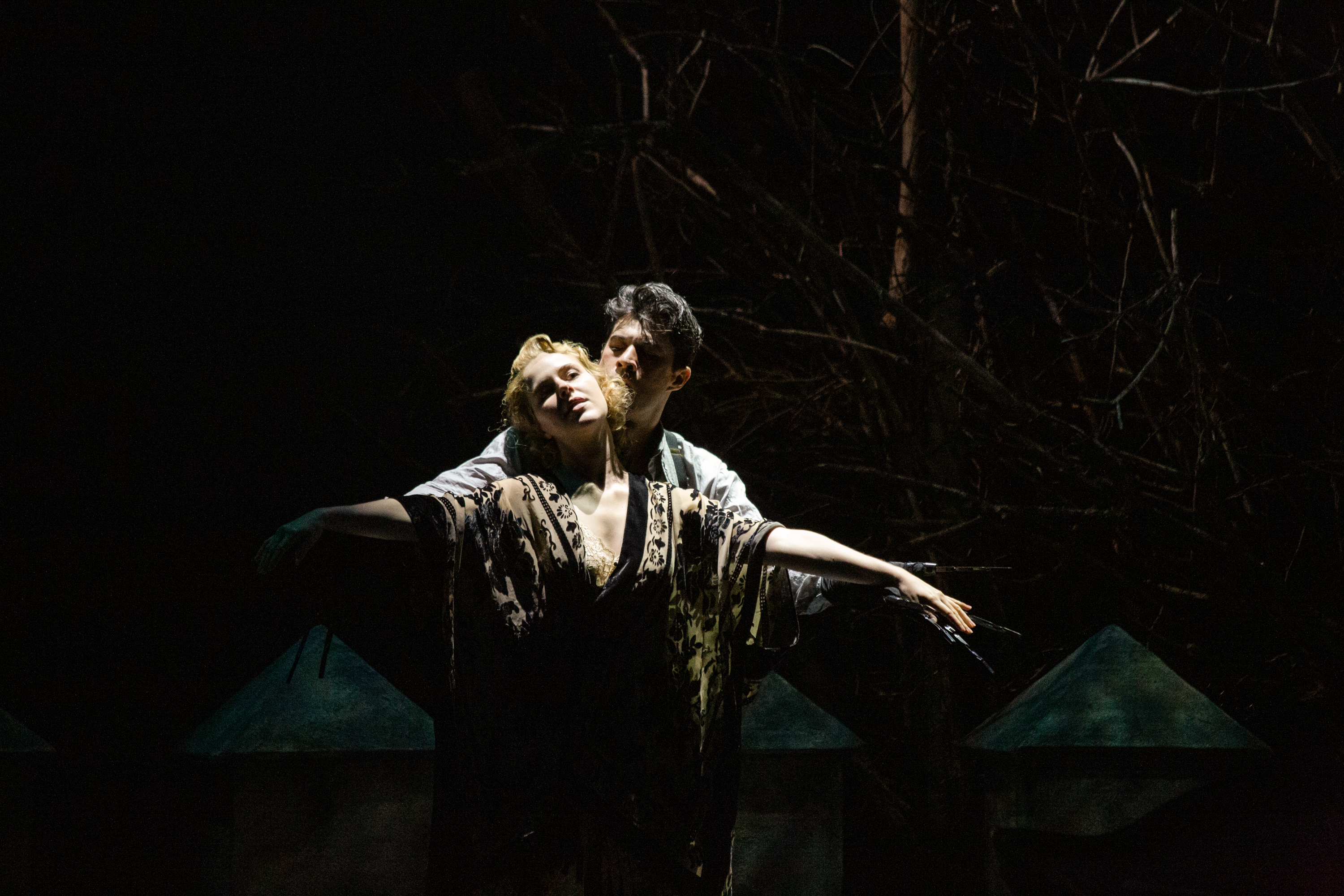 Bram Stoker wrote his four-hundred-plus page novel Dracula in 1897.  The world’s best-known vampire story has changed considerably on its way to becoming the play that is now in production at Berkshire Theatre Group’s Colonial Theatre in Pittsfield, Massachusetts.

Hamilton Deane, a British playwright, was the first to dramatize the novel in 1924 after Stoker himself attempted to create and failed at managing a  concise stage story.  Deane focused on the central part of the plot excising references to the first and third sections of the book.  He was followed by John L. Balderston, American, who further rewrote the play by dropping or combining characters as well as making significant plot changes.  The image that has come down to today is that of Bela Lugosi in the 1931 film followed by Frank Langella’s movie in 1977.  The play at the Colonial has been revised even further, the most obvious of which is that Dr. Van Helsing is played by a woman (Jennifer Van Dyck), the insect-eating Renfield (Matt Sullivan) is a more sympathetic and humorous character, and Lucy Seward (Emma Geer) is his victim, not Mina, identified in the program as “The Woman in White.”

This production eschews the darkness of the two films and previous stagings; rather, it is sometimes over-the-top as a melodramatic celebration of the unknown and the undead.

Ms. Van Dyck, in particular, is very campy but often effective.  She uses exaggerated gestures and bounds back and forth across the stage which recalls the embellished acting styles in the original black and white Lugosi film.  Van Helsing is brilliant and knowledgable about mysterious illnesses and revels in curing those stricken, thus Van Dyck’s kinetic energy.

More in the vein of Langella than Lugosi, Michael Winter’s Dracula is quite suave using his charms to find and seduce his victims.  He is, at first, likable as the Sewards’ new neighbor, but grows more chilling as he senses the dangers of Van Helsing’s investigations. Winter pulls off the transitions imperceptibly.

Emma Geer as Lucy in her first scenes is convincingly fearful over the intensifying  inability to connect to her own humanity.  Geer’s subtle metamorphosis in body and voice lends credence to the transformation which Dracula’s presence has engendered as he subjugates her to his will.

Jonathan Harker, Lucy’s fiancee, is played by Nome SiDone.  His character is clear in that he is committed in his love for her; however, there are times when the actor swallows some of his lines which hampers the sincerity of his devotion.

The sets by Bill Clarke are wonderfully detailed and recreate the historical period in which the play takes place.  The furniture and the light fixtures are redolent of the Victorian era giving Seward’s study a heavy atmosphere which is vitally necessary.

The costumes of Hunter Kaczorowski identify the characters’ status.  The most colorful costume, a radiant blue, is Lucy’s after she has seemed to regain her strength.  Otherwise the others are dressed in somber colors fitting the tone of the play.  Scott Killian’s sound design, music and other attendant effects, underline the dark mood of the play.

Mr. Auburn’s direction enhances the mood with his actors flamboyant emotions in the style of the play’s time of creation.  In that sense it serves the authors’ intentions.

When first performed, the respective Deane and Balderston scripts were well-received  as that was an acceptable style of their eras.  Today, however, plays of that time are often played to be overly dramatic.  This does not mean they are not entertaining.